Wizarding Wardrobes is set to open at Warner Bros. Studio Tour London – The Making of Harry Potter – on Friday.

Philip Treacy is renowned for his beautiful, and often wild, hats. He numbers, not only celebrities and royals amongst his clientele, but also students from the French wizarding school, Beauxbatons Academy of Magic. Treacy designed the wizarding version of a trilby that set off the uniform in Harry Potter and the Goblet of Fire.

The new display will feature a hat maker’s studio. It will show how the beautiful Beauxbatons hats were designed, moulded and finished.

“It was a personal thrill for me. As a hat designer, to come up with a hat for something as iconic as Harry Potter, it’s about as iconic as it gets,” says Treacy.

This six-week feature brings to life the costumes, hair and make-up effects from the wizarding world. It opens on Friday 21st July and will run until Monday 4th September 2017. The Making of Harry Potter opened on 31st March 2012. The attraction offers visitors the chance to get up close to authentic sets. They can also discover the magic behind spellbinding special effects. In addition they can explore the behind-the-scenes secrets of the Harry Potter film series.

Wizarding Wardrobes not just about hats 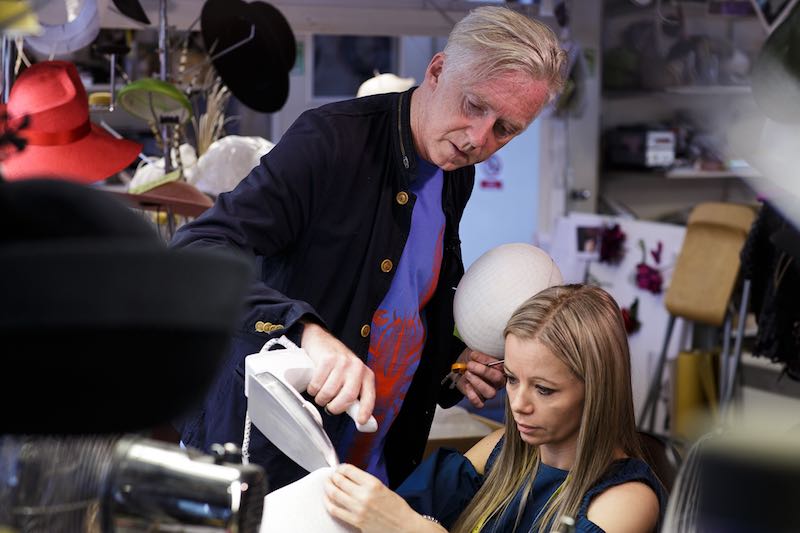 Wizarding Wardrobes isn’t just about hats, of course. It will also display, for the first time, a selection of outfits designed for Daily Prophet reporter Rita Skeeter. Costume designer Jany Temime used 1940s Hollywood gossip columnists as her inspiration. She also carefully matched Rita’s outfit to the story on which she was reporting. So, for instance, she wore a patterned leather suit to match the scales of the dragons used in the first Triwizard Tournament task.

Further new costumes on show will include items worn by Hogwarts’ professors Lupin, Umbridge and Lockhart.

Visitors will be able to step inside Professor Slughorn’s armchair suit in a brand-new demonstration of the suit used in Harry Potter and the Half-Blood Prince. Actor Jim Broadbent, playing Professor Slughorn used the chair/suit as a disguise to evade capture by Death Eaters.

Make-up and hair isn’t forgotten either. An all-new display features artists Amanda Knight and Lisa Tomblin. It will highlight the skills of the team who applied Harry Potter’s iconic lightning bolt scar. This was done a staggering 6,000 times during filming. The feature also shows exclusive footage reveals how artists created Bellatrix Lestrange’s pointed teeth. it also shows how they created the wounds of Muggle Studies teacher, Charity Burbage.

The new display comes soon after this year’s Forbidden Forest expansion, the design of which was led by LA-based Thinkwell Group.