Les Machines de l’île is proving to be a tourist magnet for the French city of Nantes. Owen Ralph explores the wonderful world of La Machine and its mechanical creations.

As regeneration projects go, François Delarozière and Pierre Orefice’s Les Machines de l’île is about as entertaining as they come. This super-sized slice of street theatre channels the spirit of Jules Verne’s invented worlds and the mechanical magic of Leonardo da Vinci’s idiosyncratic engineering. And for the western French city of Nantes, it’s a people magnet.

Where once ocean-going vessels were fabricated, a menagerie of weird, wonderful and machine-driven creatures captivates tourists throughout the year. Arguably the most famous of them all is the Grand Éléphant. 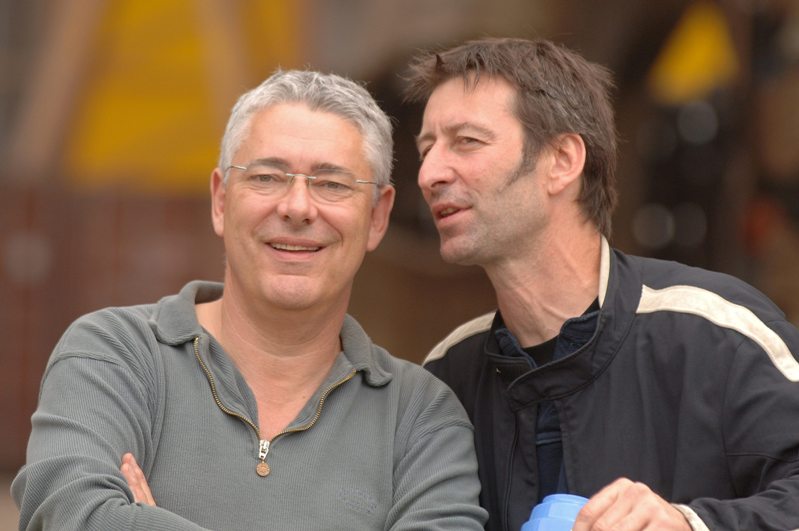 “When this majestic animal goes out for a walk, it is like architecture in motion leaving a cathedral,” we are told.

“Once aboard you will see the moving gears that power the legs. A machinist will tell you stories about the elephant and have it blast its trunk for your pleasure.”

Up to 50 people at a time can ride this marvellous mechanical mammal. As the creature strolls its way through the former shipyards of the isle of Nantes, the island at the heart of this French city, passengers enjoy a breathtaking view from up high. And for the spectators on the ground, it’s a fantastic yet surreal sight. 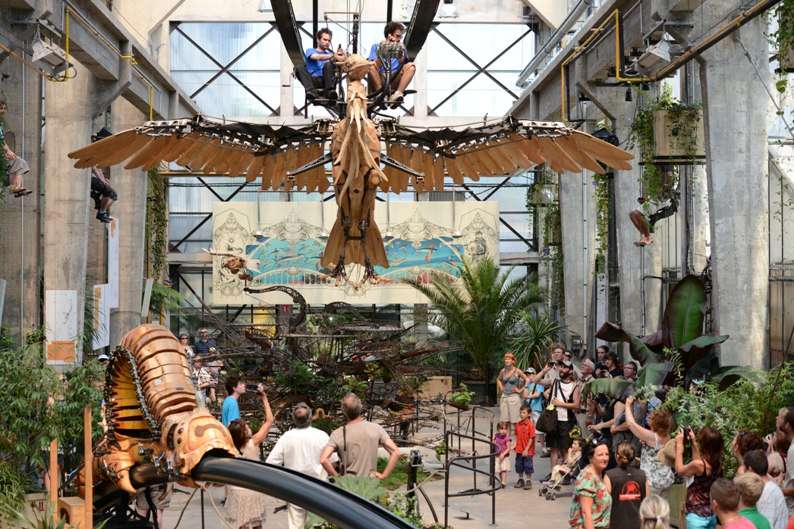 Inside the Galerie des Machines, converted shipbuilding halls, visitors encounter further creatures including a mechanical spider, manta ray and heron. The creative process behind the contraptions and pieces of art in the adjacent workshop is fascinating.

The unique constructions that populate Les Machines de l’île were created by François Delarozière’s company La Machine. In their first year (2006), they entertained 190,000 paying guests, but now regularly pull in over 650,000 annual visitors. Many more come and watch the show for free as the Grand Éléphant parades back and forth between the Galerie des Machines and Carrousel des Mondes Marins. 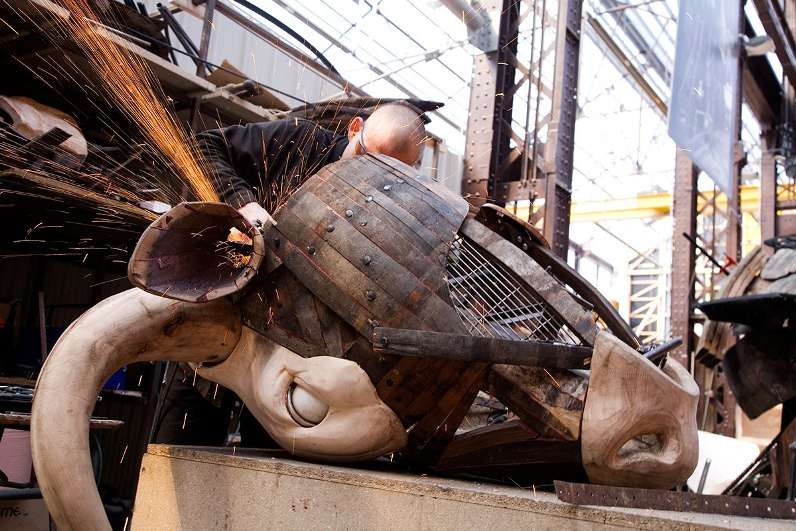 While they may attract many people to Nantes, La Machine’s Frédette Lampre is not comfortable with the term “attraction”, preferring to refer to Les Machines de I’lle more as a cultural and touristic project.

Orefice said: “The desire was to invest in tourism and culture and not leave the monopoly of the imagination to Disney, Parc Astérix etc.

“Performing arts have an important role to play in mediating with the public. We talk to all audiences at the same time. There is no separation from the world of children and the world of adults at Les Machines de l’Ile.”

The project receives around 10% of total funding from public sources and a further 5% from sponsors and patrons. It does not, however, employ any volunteers.

“Our legal status does not allow it,” said Orefice.

The confidence of the locals, as well as elected officials including Jean-Marc Ayraul, was key to establishing the project.

“Our goal is to increase the appeal of Nantes by enriching the cultural and tourist offering,” said Lampre.

“Les Machines’ ambition is to accompany the urban [re]development of the island of Nantes in the heart of the city. We want to make the city of tomorrow a place to live in, a meeting place, a place of enchantment.”

A visit to Les Machines de l’île, and in particular the workshop of La Machine, is both entertaining and educational. ‘Machinists’ explain how the mechanisms work. During the tour/performance, the machines periodically awaken, suddenly turning into alluring animals or monsters. 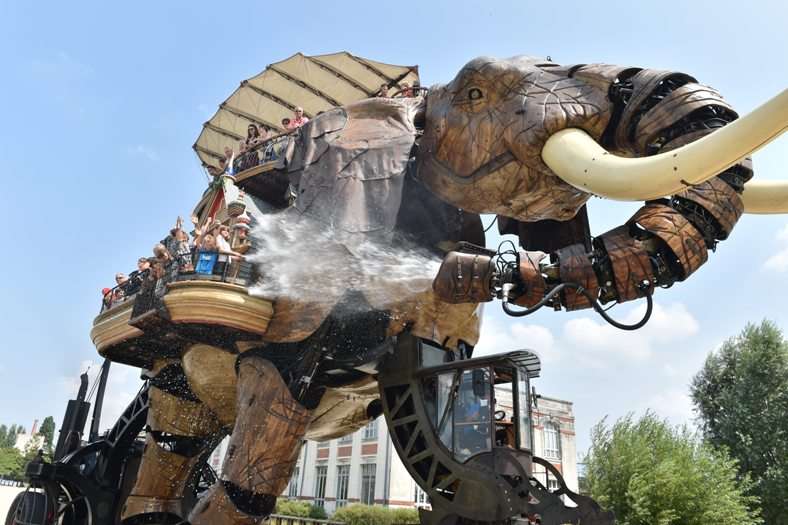 An amusing exhibit is the European Flight Test Centre. This wind tunnel flight simulator tests the flying machines. Guests watch as a machinist puts on helmet, goggles and seat belt and takes to the controls of a “flying flea” at simulated speeds of more than 100kmh.

Orefice said: “These uncommon machines convey a mysterious reality to this island just like the time when vessels were launched here for all the trips of the world.

“There is an ambiguity between the mechanical and the living, the machine and the animal. They serve as the entry point to an imaginary world shared with our public.”

But why an elephant? “Why not?” responded Lampre.

Orefice is more assertive in his assessment of this particular choice of creature.

“Elephant is the largest of the mammals,” he said. “All the attributes of the elephant are positive. Intelligence, sociability, it has its territory or its track, the mother-child relationship. But above all we wanted a piece of mobile architecture that the public could follow in great processions behind big puppets or giants. The madness of this elephant is its size – four times a real elephant. And it is walking!” 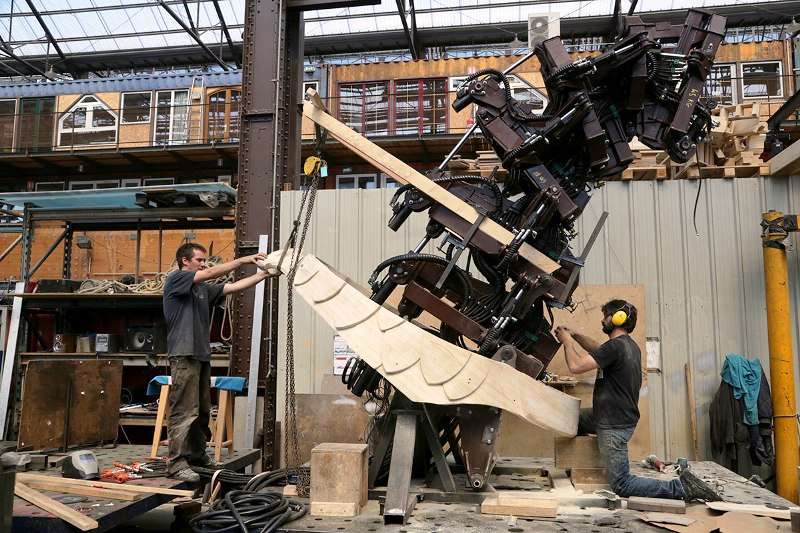 Lampre added: “There were many challenges but perhaps the biggest was to be able to embark with people on it. And to be approved by the office of control.”

A carousel unlike any other

Both in size and content, Carrousel des Mondes Marins is unlike any other carousel. Dedicated to the sea, it stands almost 25m high and 22m in diameter and comprises three rotating tiers.

In the seabed, guests discover 14 elements including a giant crab, reverse propulsion squid and a submarine. In the abyss, on the second level, six elements hang above the seabed. Among them are a deep sea lanternfish, manta ray and pirate fish. The sea surface sits on top of the two tiers and a lattice concrete wall surrounds them. 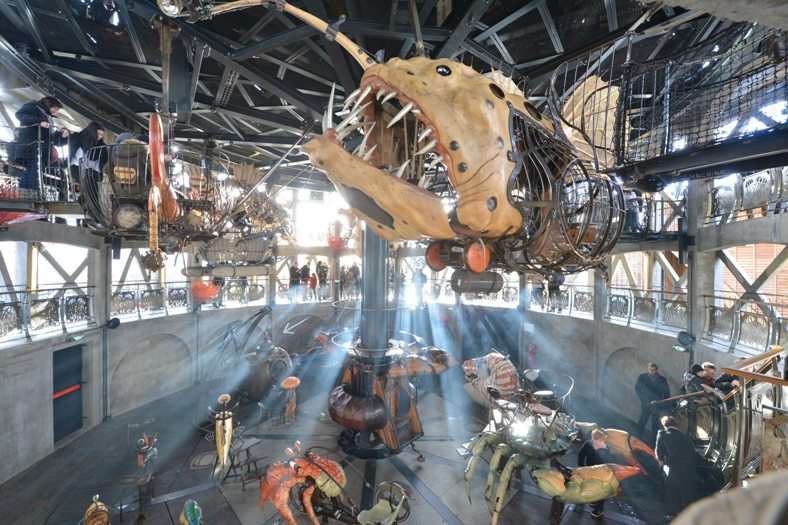 Sea creatures on the Carrousel des Mondes Marins (Marine Worlds Carousel)This part of the attraction, representing the surface of the sea, has the appearance of a more traditional carousel. Yet the flying fish, boats, sea dragons and jellyfish that sit among 24 mechanical waves are anything but conventional.

Up to 85 people at a time can ride this marine dream machine, which pays tribute to Nantes’ maritime past. The carousel also tips its hat to a golden era of fairground entertainment.

“Fairground art was very inventive in the 19th and the beginning of the 20th century,” said Orefice. “But the cinema and then television ruined the inventiveness of the fairgrounds.” 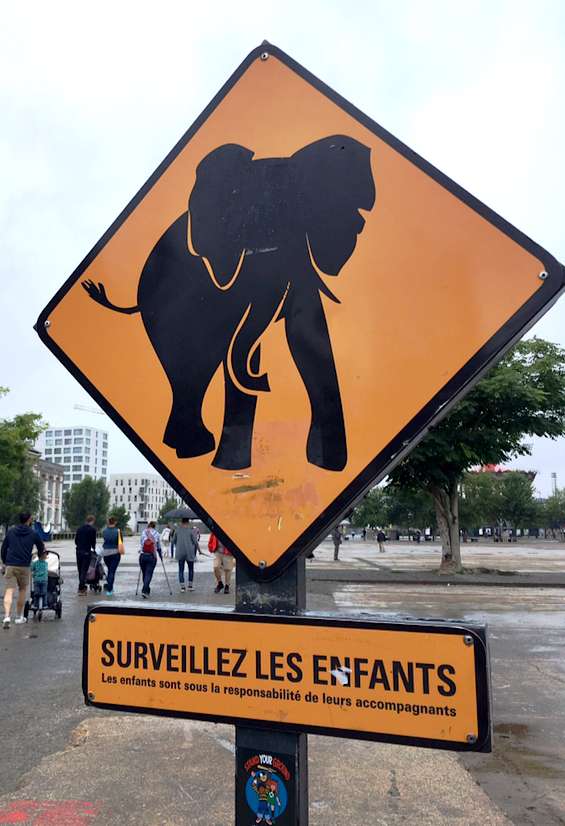 Cities around the world invite La Machine to perform with its creations. These include Les Mécaniques Savantes, an obscenely-sized spider created for Liverpool’s year as European Capital of Culture in 2008. Two years later a second mechanical arachnid helped celebrate the 150th anniversary of the opening of the Port of Yokohama.

Arguably the most ambitious project to date from La Machine was Long Ma Jing Shen in Beijing. It was created to mark the 50th anniversary of the diplomatic relationship between France and China. Central to the performance, which draws inspiration from the Chinese legend of the goddess Nüwa, was a humungous Dragon-Horse figure. Chinese patron Adam Yu funded the project.

There will be less of a Jules Verne flavour to the next major project at Les Machines de l’île. Here sci-fi will give way to nature.

“François has always been inspired by nature and loves its anatomy and its rhythms,” said Lampre.

The seed for the Arbre aux Hérons (Heron Tree) was planted in Delarozière’s mind some years ago. And on the island of Nantes it has already sprouted. A 20m-long branch extends out the front of La Machine’s warehouses and towers over the plaza outside. The public can walk along the branch at the end of their visit to reach the bar and the gift shop below. 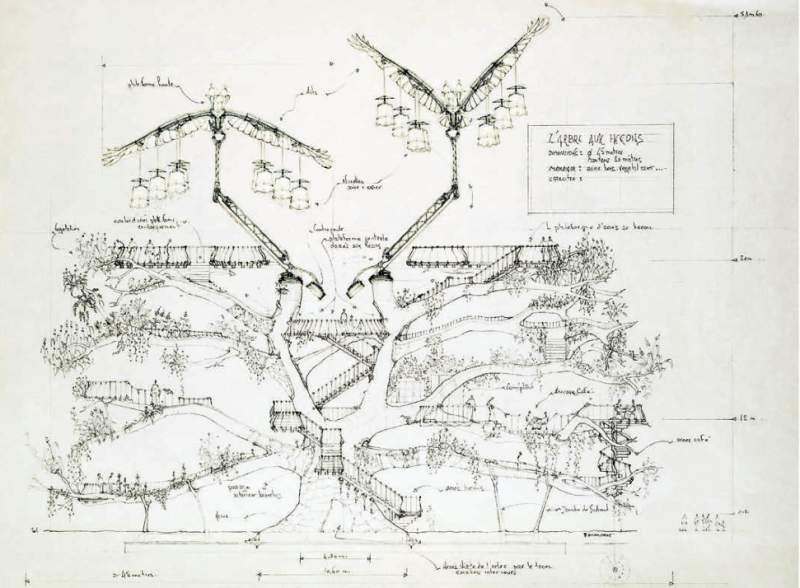 Design for the Heron Tree

The 1,000-ton tree will stand 50m in diameter, topped by two 15m herons, when it is complete. It will be Les Machines de l’île’s largest and arguably most spectacular project yet.

Spiral staircases around the outside of the trunk will give access to different branches. Here visitors will be able to explore hanging gardens. The plants will grow in special bags without pesticides or fertilisers and recovered rainwater will provide irrigation.

A highlight of the experience will be the chance to take a flight under the birds’ wings. Up to 23 passengers per heron will be able enjoy views over Nantes from a height of 47m. The total capacity of the tree at any one time will be 400.

Opening is expected in 2022, subject to crowdfunding.

With adding Arbre aux Hérons, Les Machines de l’île hopes to achieve annual ticket sales of over one million. That may sound ambitious, yet according to Lampre, La Machine’s creations already entertain a seven-figure audience each year.

“Around 680,000 people pay for a ticket to embark the elephant, the carousel or visit the gallery,” she said. “But we could say that several millions of visitors come every year because you can see machines for free and you only pay to go inside.”

As head of marketing for La Machine, Lampre is aware of the economic and tourist impact of Les Machines de l’île.

“We talk of Nantes all around the world,” she said . “And the media does not hesitate to report what we do. That provides a lot of value and dynamism for the image of the city. This kind of publicity is worth more than the cost of an elephant or a heron tree.”

10 ways to have the most luxurious VIP Disneyland experience ever