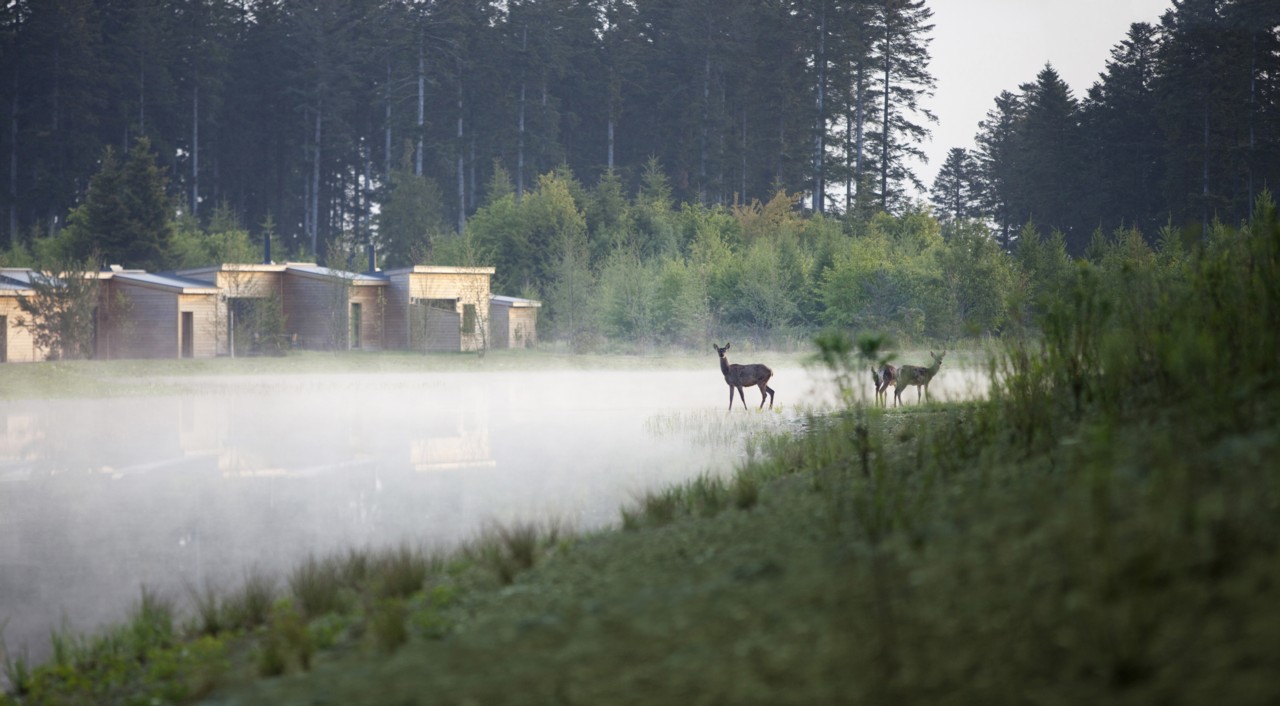 “A forest, inhabited by many wild animals roaming around your innovative, nature-designed wooden cottage…”

Not lines from a fairytale, but the words of Michel Linet-Frion, Creative & Innovation Director at Pierre & Vacances/Center Parcs, describing the company’s newest resort, Le Domaine du Bois aux Daims in France which opened on June 29th.

Pierre & Vacances / Center Parcs owns and operates 21 holiday villages across Europe. Although separate from the UK company, both use the same Center Parcs model, creating car-free, countryside destinations where holidaymakers have

the chance to reconnect with nature.  With the opening of Le Domaine du Bois aux Daims in France, Pierre & Vacances / Center Parcs is moving into a new area, not just geographically but strategically, too, as this is the first storyline led parc.

Michel Linet-Frion (right), the company’s Creative & Innovation Director talks to Blooloop about this new direction for the Center Parcs brand and why the familiar model needs to evolve.

“Usually we don’t have a theme, ” explains Linet-Frion. “Our theme is nature and immersion in nature but it’s not really something we can use other than by trying to insert everything in nature carefully so that it blends in. All the houses are small and concealed as much as possible, all the colours and designs are natural and then, in the vicinity, we plant – the only decoration we have is green, its planted – that is how we characterise ourselves.”

According to Linet-Frion, the company has exhausted ‘first choice locations’ in France (ie close to the bigger cities). He says this throws up two options:

“One: to make a more compact concept on smaller site but still with all the DNA. An example of this is the one we opened in Germany last year, Center Parcs Bostalsee, which has all the ingredients but in a different scale and it’s proven a successful strategy – a compact Center Parcs.  But, here in the Vienne region, we didn’t want to do that.”

Vienne is quite remote – there are no large cities nearby providing a steady supply of short-break customers. But, there are a good number of attractions in the area.

“So, we think that if we can get our guests to come and use Center Parcs as a base…so, that’s why this Parc is not closed – but open to other partnerships with local leisure destinations. Futuroscope is not far, Puy du Fou is in the area, there are zoos and all the Loire valley chateaux.”

The idea of writing a storyline and theming it evolved as a way to encourage guests to travel further and stay for longer:

“…to give this park some kind of specific flavour; a difference so that the classic Center Parcs guests would be intrigued and interested and attracted. So, instead of doing a park in nature where sometimes you get to see some wild animals but it’s down to luck, here we organise it.  So, we said here we’re going to build an animal park with plenty of animals.”

To achieve this, Pierre & Vacances Center Parcs have teamed up with actor/director, Jacques Perrin. Perrin has directed and produced several popular nature documentaries including Microcosmos about the world of minibeasts and the ground-breaking Winged Migration which was nominated for an Academy Award.

“He’s well known by the public for his involvement in wildlife movies and he’s got a big reputation so for us we can use his notoriety and at the same time his expertise and experts. We can organise animal encounters onsite with trained people.”

The site will also offer a home to animals that have been used in wildlife filming and are accustomed to human contact: “in the early phases, we’re going to have some foxes and badgers, big birds; all these events on the site and these animals.

This new strategy will necessitate compromises, but Linet-Frion believes the benefits far outweigh any perceived disadvantage.

“It’s going to have some constraints for the guests. For example, we have to have gates to keep the animals in so there’s less freedom on site to roam around.  You have to take this walkway here, you cannot drive here or take your bicycle there but you will have many, many, many opportunities to encounter animals. We will also have animals in the forest, a big farm with special farm activities, aquariums in the Aquamundo so you’ll dive and see immersed aquariums with fish in them. And, you’re going to have deer around your house almost for sure.”

The animal storyline/theme is a thread that ties the whole park together.

“We have introduced [animals] into all the designs of everything we did so all the cottages are decorated with reference to animals.  We are building an area of treehouses – they’re houses in the air and they’re really very specially designed;  each one has its own little theme related to whatever lives up in the trees – birds, squirrels.

"In the facility in the centre, instead of just putting in the restaurant and shops, each one has a storyline. This is kind of new for Center Parcs – all these storylines are based on animal stories or legends of the forest so that makes this park very different.

"The Aquamundo, our signature indoor waterpark, doesn’t have a classic waterpark or pool look and feel. It’s truly an indoor tropical garden in which we insert the various water activities but you have the feeling that you’re in a landscape. We have put that together for the previous Centre Parcs and we’re building on that. That’s really becoming very specific for us.”

Sustainability and concern for the environment have always been central to the Center Parcs ethos. Pierre & Vacances has embraced this, signing a partnership with WWF in 2005.

According to their brochure for Le Domaine du Bois aux Daims, “one of the main ambitions of the project has been not only to preserve the site’s biodiversity, but to improve it”.

Before any work commenced, they commissioned a biodiversity site survey. They have installed systems to promote water conservation, used sustainable materials, collaborated with local nature groups, dug ponds, and left a 35 hectare area to the south of the development untouched as a nature reserve. According to Linet-Frion, their guests now expect this level of commitment:

“If they feel that were not very sustainable or wasting energy they will react to it, so we have to take this into account.  It makes us change things that we would not have done automatically a while ago.  For instance, we have biomass boilers and although we would love to have outdoor water, it needs to be heated all year round, so we now reduce  that.”

“It attracts different guests who we don’t necessarily attract at the moment – adults without children, for example.  This is really the first statement spa that we’ve made and built from scratch: a tropical spa for adults only with all the treatments and many self used saunas or steam baths experiences. A private little Aquamundo.”

Regarding on the international developments, Linet-Frion confirms that Pierre & Vacances Center Parcs, like so many in the industry, is also looking towards China as a future market.

“In China, we’re not very advanced yet – it’s not that we’re going to open in a few months. It’s going to take a while but we have a lot of potential and we’re looking at a lot of different areas. In China, the way forward is that they build a lot more densely than we would – they’re almost inside the big cities – so it’s not the same concept because you’re not out in the wild or middle of nowhere. It’s more urban and dense but they still really like the idea of having something more sustainable and nature orientated. So far, it’s not proving to be very easy because the really nice natural sites are not going to be built on, so the sites that we’re looking at today have already been surrounded by other activities. It’s not really our way. In Europe, we choose areas that no one wants because that’s the concept and also by going into areas that no one wants we get subsidies – it’s also part of our recipe – but it’s not so much advanced so I can’t say much yet.”

Linet Frion explains that countries outside Europe, particularly in the Far East, struggle to connect with the concept of Center Parcs because there are no reference points.

“It’s not difficult to understand but it’s probably more difficult to explain than a hotel or a resort which they already have examples of.”

Right now, Linet-Frion is clearly excited by the direction Center Parcs is taking with le Domaine de Bois aux Daims. Does he see it as a model for future Parcs?

“As we go, we refine the model and this is the direction of the refinement that we are taking but the next one will be probably a German one. Our German guest behaviour will be different and we’ll take this into account and refine the recipe.”

Wherever their next project turns out to be, Linet- Frion is convinced that the market demands an evolving brand.

“Center Parcs has an identity but it cannot rest on that or else we’ll be caught out.  But, ” he adds, “obviously we cannot just duplicate, we need to adapt. That’s what’s good and fun about it – and the story we have to reinvent every time, which I like.”

Turning The Tide at The Blue Planet Aquarium 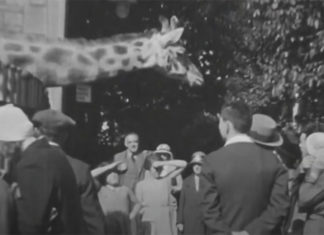