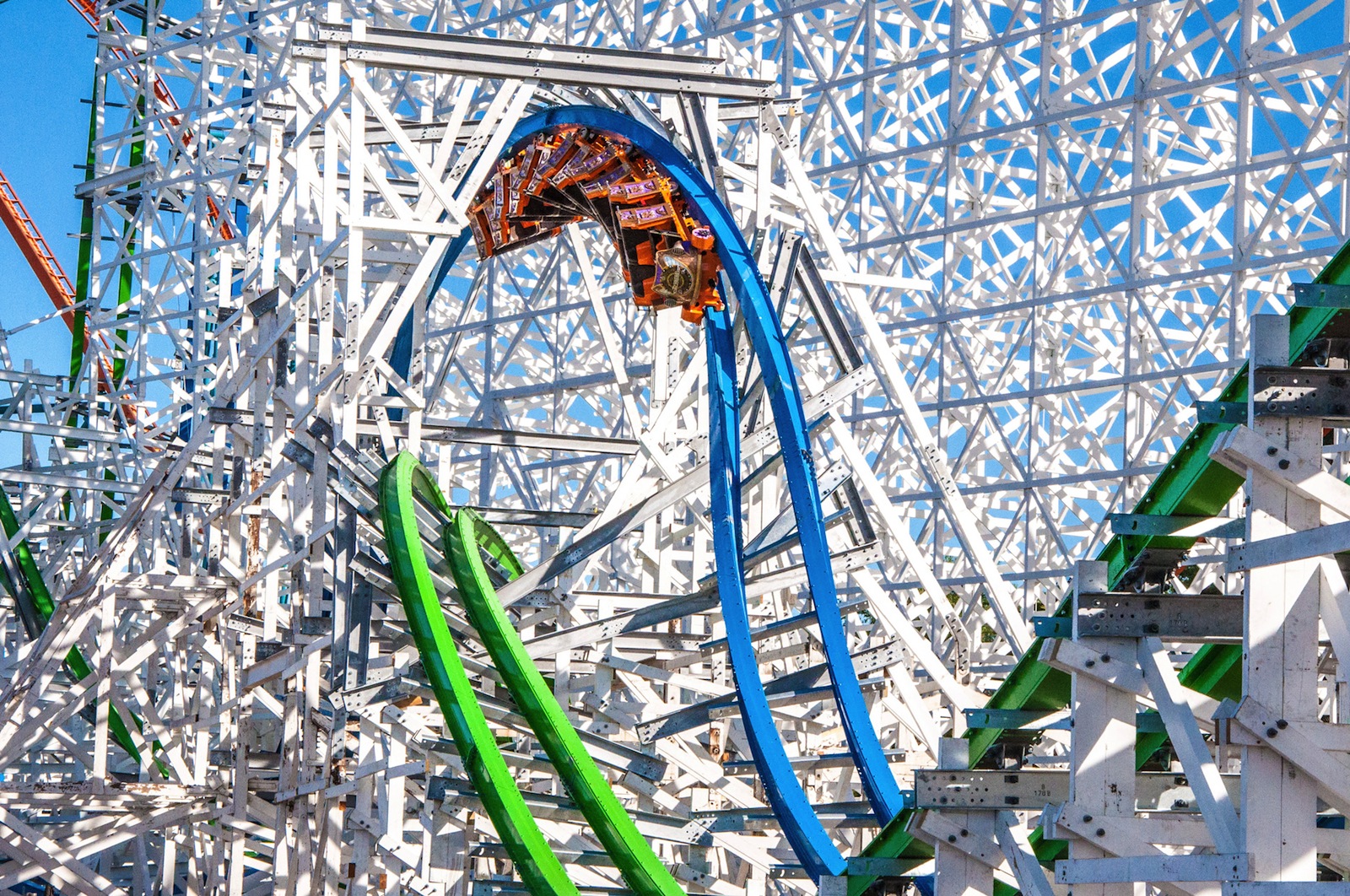 If the economic climate is tough right now, someone forgot to tell Jim Reid-Anderson.

The irrepressible Chairman, President and CEO of Six Flags has led the company through another blockbusting year with a 7% increase in admissions revenue and a 3% increase in sales revenue within the company’s 18 regional theme parks.

The company is seeing its best ever customer satisfaction ratings and shareholders can’t complain either, enjoying a 4.3% yield on their investment, more than twice the S&P 500 rate.

Reid-Anderson (right) joined Six Flags in 2010. The company had filed for bankruptcy the previous year, heavily in debt – a victim of the challenging economic environment. It needed restructuring and reinvigorating. Previously selling itself as a global brand, Reid-Anderson changed tack, focusing on being the best regional theme park player. Reid-Anderson cites this and innovation – ‘it’s in our DNA’ – as key factors in the company’s impressive turnaround.

Blooloop caught up with him to talk about his company’s strategy for success and his focus for future growth.

“At Six Flags our goal is to create fun, safe and thrilling memories for our guests by delivering exceptional guest service, ” he says.

Reid-Anderson is British and studied in England, gaining his degree at Bristol University. He is a fellow of the U.K. Association of Chartered Certified Accountants. Before joining Six Flags, he occupied a number of senior advisory roles, most recently to Apollo L.P., a private equity investment firm and, before that, to the managing board of worldwide brand, Siemens AG.

His breadth of experience has had a huge impact on the company’s fortunes, enabling Six Flags to enjoy a smooth ride over a bumpy economy. Their return to shareholders is up 6 fold in the last four years. When other parks have been adversely affected by fuel prices or bad weather, Six Flags seems to carry on regardless.

"…and our guests confirm that opinion through the more-than 1 million surveys we collect each year. Our guest satisfaction scores have risen every year in the last 5 years and are at an all-time high, including value-for-the-money ratings.”

Season passes and membership are up 53% this year and Reid-Anderson has also successfully introduced new products such as the All Season Dining Pass. How has he made these offerings so attractive to his guests?

“In addition to introducing new rides and attractions in every park every year, we are making significant annual investments in our Halloween-themed Fright Fest® and winter-themed Holiday in the Park® events, which makes our Season Pass and Membership programmes even more valuable.

We also are enhancing our in-park offerings, such as our All Season Dining Pass, which allows guests to eat 2 free meals and a snack every time they visit the park. These and all of our other programmes and services, including our membership programme itself, provide increasing value to our guests, which in turn helps grow our base of season pass holders and members.”

The first Six Flags theme park opened in 1961 in Texas – the six flags in the name refer to the different nations who have governed the state throughout its history. From there, the company expanded across North America and is now the world's biggest regional theme park company with 18 parks which have generated record financial performance over the last five years.

So, having created such buoyancy in his local market, is the time now right for global expansion?

“We believe now is the time to expand our brand outside North America.”

“We have recently  entered into two strong partnerships—one in China and the other in Dubai—to help build Six Flags-branded parks in those markets. We are in the early phases of those projects and they are progressing well with no significant challenges. We believe Asia and the Middle East, along with India and South America, represent growing opportunities to develop the theme park industry and specifically the Six Flags brand. There is no doubt that Six Flags is a great place to work, play and invest given our domestic and international growth opportunities.”

Six Flags has a 5-year plan with capital spending at 9% of revenue, a key element being to invest in new rides and attractions in every park every year. This year, the company unveiled 14 new guest experiences including BATMAN: The Ride at Six Flags Fiesta Texas, the world’s first 4D Free Fly Coaster incorporating state-of-the-art magnetic technology, which causes riders to flip head over heels with a feeling of weightlessness.

“2015 is our best line-up of products and attractions in our history, ” enthuses Reid-Anderson. “In the last few months we have opened two record-breaking hybrid coasters, a first-of-its-kind 4D wing coaster and two new interactive dark rides that have been described by experts as among the best in the world. We like setting world records because that is part of the Six Flags brand.”

Is it possible to innovate to this level year on year? Reid-Anderson evidently thinks so.

"In many areas we are at the forefront of our industry with innovation, as we have been throughout our history. Many of our parks are innovation leaders and Six Flags Magic Mountain is clearly the thrill capital of the world with more roller coasters than any other park on the planet. We use that skill to effectively implement our strategy of introducing a new ride or attraction in every park every year."

How much bigger/faster/higher can coasters get – and, indeed, is that what guests want?

“Not all coasters need to be bigger, faster or higher, ’ he says. “We like to build a few world record-breaking rides each year and also look to introduce attractions that are more suitable for our younger or more moderate thrill seekers. It is more about making sure we have an appropriate mix of thrills across all of our parks and news every year so we can draw people back again and again.”

As technology continues to evolve at an ever-increasing rate and the public becomes more savvy and more demanding, how do theme parks not only keep up with but exceed their guests’ expectations?

“Our guests are demanding higher levels of connectivity and service…"

"..and are busier than ever before, ” agrees Reid-Anderson-Anderson. “We see this from own lives and the extensive market research we perform. We work to stay ahead of guests’ expectations by innovating new rides and attractions, along with other areas of our operations. For example, we have recently introduced our membership programme, all season dining pass and all season shopping pass. Our culinary capabilities continue to expand as we introduce new food concepts while maintaining guest-favourites.”

Clearly rides and attractions are just part of the story. The company’s desire to be one step ahead encompasses all areas of their offering including admissions technology.

“We introduced biometric gate entry a few years ago and recently introduced a mobile app.”

Biometric access systems recognise a visitor’s finger scan and do away with the need for a physical pass card. Six Flags also provide interactive gaming in their queue lines and digital signage around the parks.

“All these innovations are recognised by guests and experts alike and we are the only theme park company to be named among the InformationWeek Elite 100 for our information technology capabilities. All of these areas are designed to enhance our guests’ experience and entice them to visit our parks again and again.”

Reid-Anderson is adamant that if you’re not embracing these technologies you will soon be out of step with consumers. Could other parks learn from his approach?

“In the future, a challenge for some theme parks must be to stay abreast of these rapid changes in consumer preference."

What key lessons has Reid-Anderson learnt outside the theme park industry that he has successfully applied within it?

"I have had the opportunity to work in several industries and live in many countries during my career, and I’ve learned that people are a company’s most valuable asset and that understanding people, especially employees and guests, is critical to a company’s success. It is important, as a leader, to define a clear strategy and communicate it, so people know where you are headed and can effectively contribute to company goals. And, then you need to reward and recognise people, build teamwork and celebrate accomplishments. Most importantly, you need to have fun, and I cannot think of a better industry than the theme park industry to have fun!

Reid-Anderson clearly relishes his role at Six Flags: “I can honestly say that I love making people happy, ”

Phoenix Rising: View From A Zoo