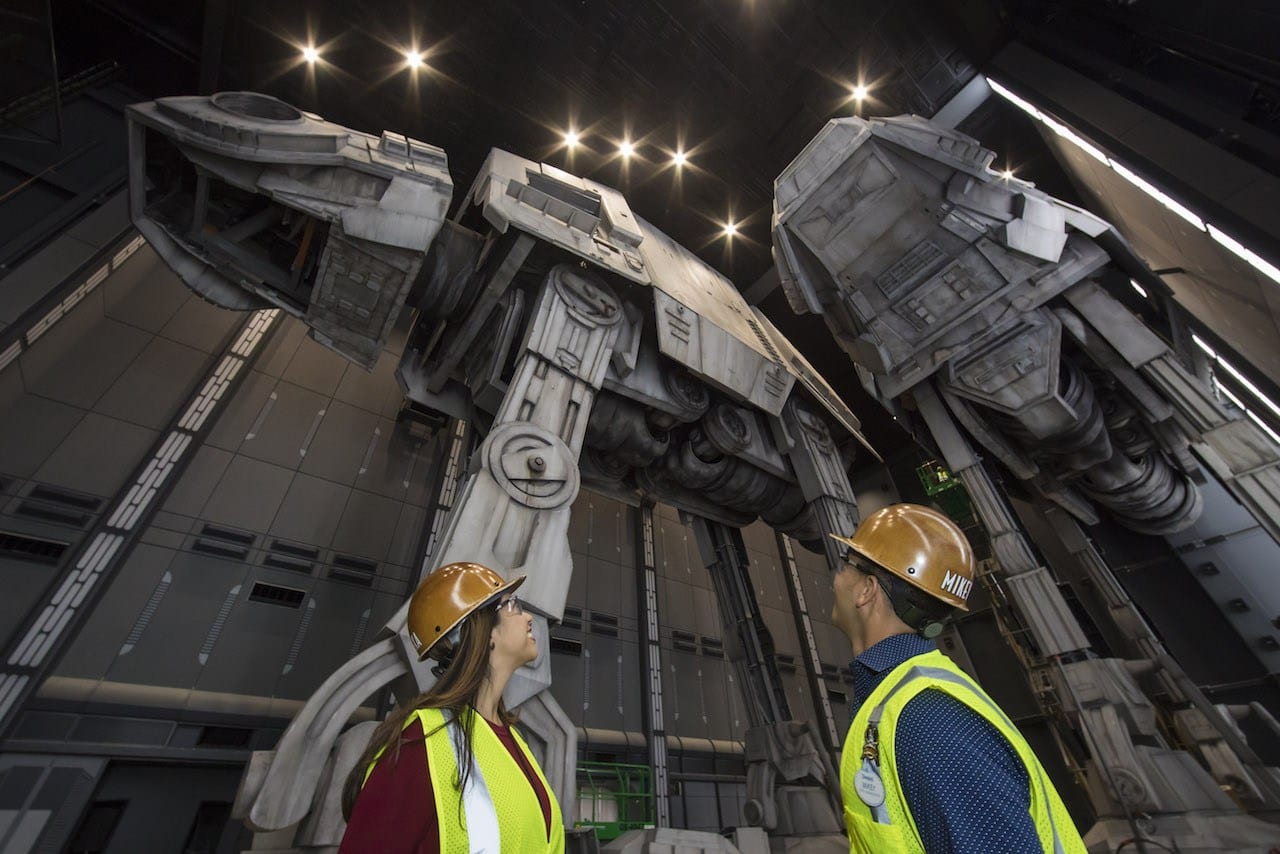 A growing starfleet of X-wings, TIE fighters, transport ships and space freighters from throughout the Star Wars galaxy have docked in the Galaxy’s Edge spaceports taking shape at Disneyland and Disney’s Hollywood Studios.

The starships will join an arsenal of war machines and space vehicles bound for the Black Spire Outpost village on the Star Wars planet of Batuu. This is the setting for the new 14-acre themed lands coming to the California and Florida theme parks.

“All of our ships are still not in,” Walt Disney Imagineering executive creative director Chris Beatty said during a recent tour of Galaxy’s Edge in Anaheim. “We still have more to come.”

The full-size spaceships, armored transports and anti-gravity crafts will populate the First Order-controlled village. They will also be found in the nearby Resistance military camp and the E-ticket attractions within the Star Wars themed lands. 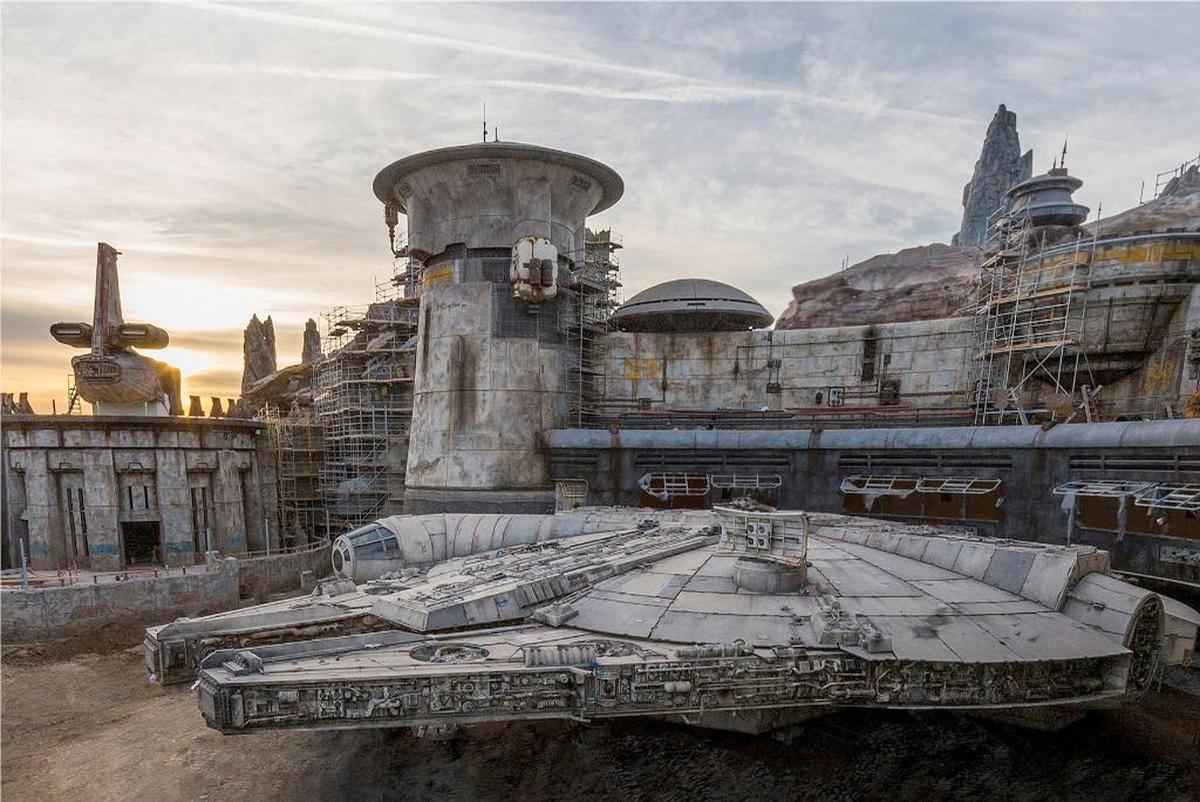 Let’s take a closer look at the ten spacecraft, combat vehicles and landspeeders bound for Batuu.

A 112-foot-long replica of the Millennium Falcon will serve as the centerpiece of Galaxy’s Edge. 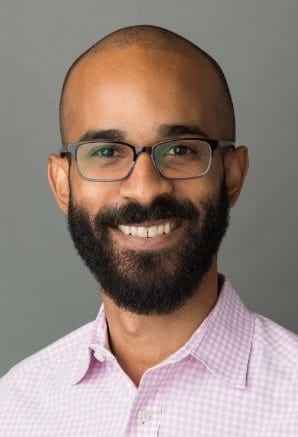 The full-sized Millennium Falcon will be docked at Ohnaka Transport Solutions. The shady intergalactic shipping company serves as a front for a smuggling operation in Black Spire Outpost.

Han Solo’s famed Corellian YT-1300 light freighter serves as the marquee for the Millennium Falcon: Smugglers Run attraction. The flight simulator puts riders in the cockpit of the fastest hunk of junk in the galaxy. Their mission: Battle a battalion of TIE fighters in order to bring back a pile of loot to a vengeful space pirate.

The full-size replica of the Millennium Falcon at Galaxy’s Edge cost $4.4 million, according to city of Anaheim building permits. 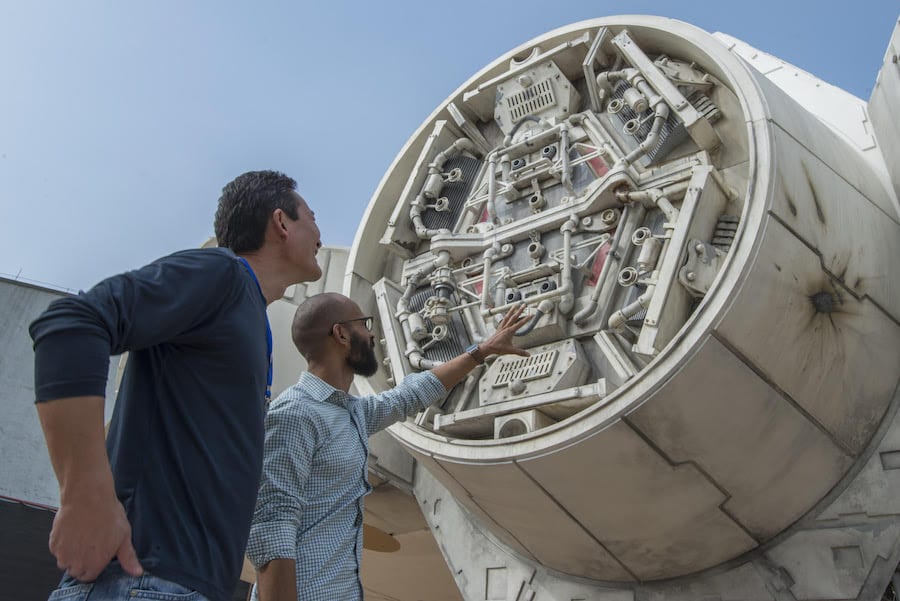 A new TIE Fighter variant has been designed exclusively for Galaxy’s Edge. It will guard a First Order recruitment station in the Black Spire village.

The new First Order TIE Echelon has never been seen in any “Star Wars” films. 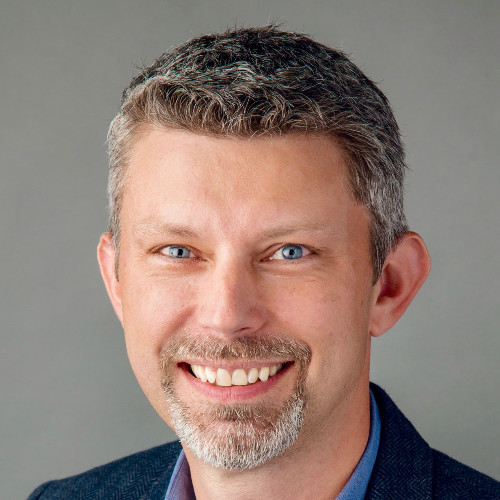 “It’s more of an assault vehicle within the world of the TIEs and the First Order,” Beatty said.

The gunmetal grey starship will serve as the marquee standing sentinel over the entrance to a gift shop in the First Order-controlled sector of the village.

The full-size replica of the TIE Echelon cost $250,000, according to Anaheim building permits. 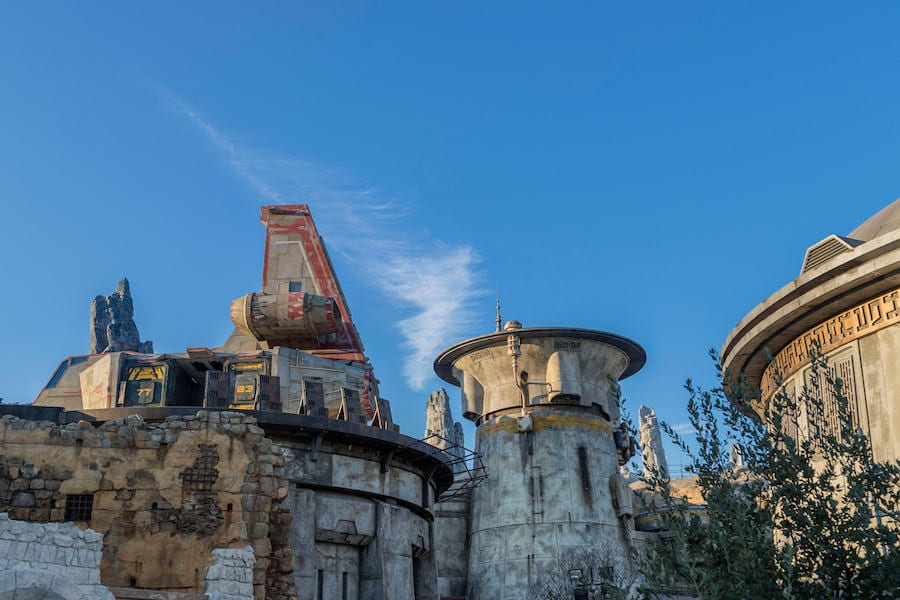 A weathered and battled-damaged freighter cargo ship that doubles as an intergalactic food truck will sit atop the Docking Bay 7 quick-service restaurant in Galaxy’s Edge.

The cargo doors of the modified Sienar-Chall Utilipede-Transport ship will be flung open as its shipment of food supplies is lowered into the hangar-like dining room below.

The food truck-like Tuggs Grub spaceship is owned by Strono “Cookie” Tuggs, the chef at Docking Bay 7, according to the restaurant’s backstory. Cookie travels the Star Wars galaxy in his mobile kitchen starship. he does this to collect the exotic interstellar ingredients he uses to create otherworldly dishes. 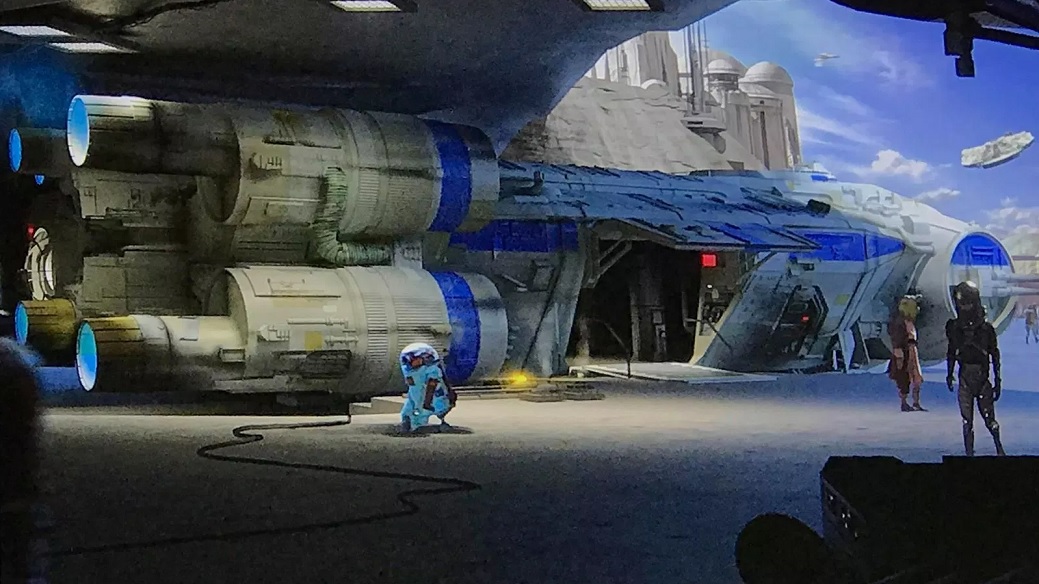 The never-before-seen Resistance transport ship will house the first of several rides in the Rise of the Resistance attraction at Galaxy’s Edge.

The Resistance Intersystem Transport Ship is also known as an I-TS. It is a long-haul cargo and troop transport starship with forward and rear guns.

The Resistance transport ship plays a key role in the new Galaxy’s Edge E-ticket attraction. About 50 riders will rush from a ready room to board the departing transport ship. After the doors close, the starship’s floor will move and shake as the transport shuttle appears to take off from Batuu.

The elaborate Rise of the Resistance comprises four ride experiences. Together, these create one of the longest attractions ever designed for a Disney park.

“This is one of the most epic attraction experiences we have ever built in terms of size and scale and complexity of the systems,” Imagineering portfolio creative executive Scott Trowbridge said.

The I-TS shuttle was created exclusively for Galaxy’s Edge.

Riders will encounter a pair of towering AT-AT Walkers aboard a Star Destroyer. This will be in the dark ride portion of the Rise of the Resistance attraction.

The four-legged All Terrain Armored Transport combat walkers made their first appearance in a battle on the planet Hoth in “The Empire Strikes Back.” Rebel squadrons famously used harpoons and tow cables to topple the heavily armored walkers.

Dark ride vehicles will pass between the legs of two giant AT-AT Walkers as riders encounter hostile stormtroopers inside the Rise of the Resistance attraction. 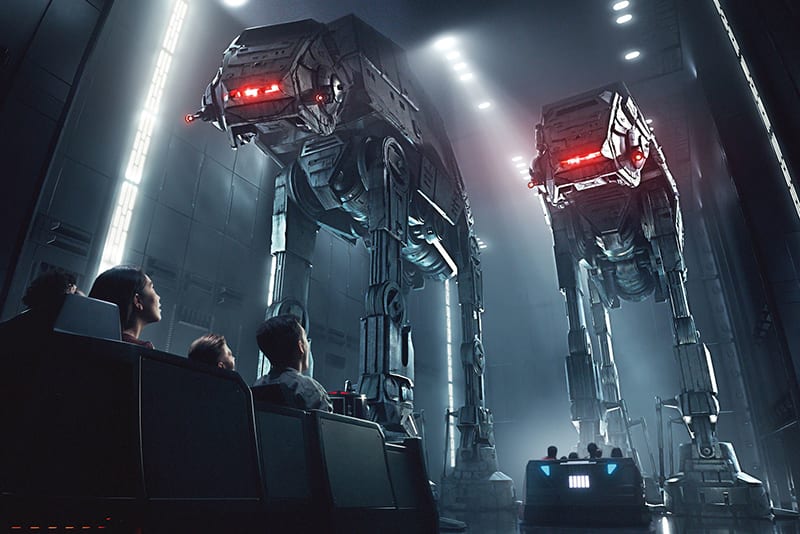 The distinctive black and orange X-Wing was used by Resistance commander Poe Dameron. It will be docked next to the I-TS shuttle in the Rise of the Resistance queue.

Riders will rush past Poe’s starfighter as they board the transport ship. Through the cockpit window, passengers aboard the I-TS shuttle will see Poe. They will see him climb into his X-wing as the transport ship departs from Batuu. Poe serves as our wingman during the ensuing battle with First Order TIE Fighters.

Poe’s X-Wing was first introduced in “The Force Awakens.” 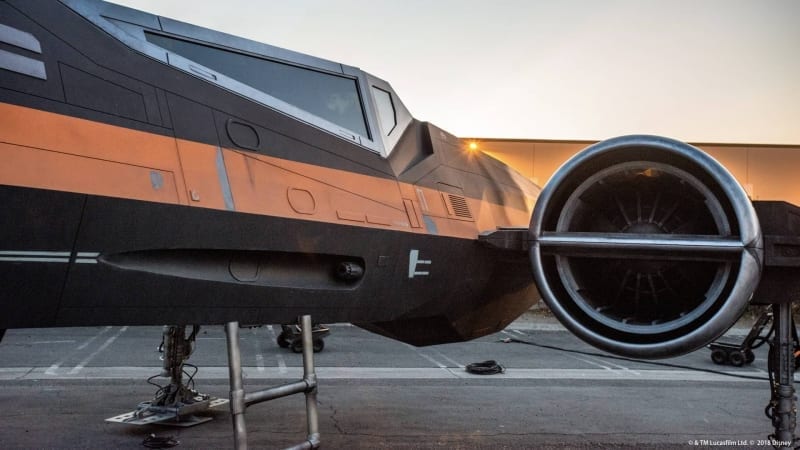 There is a second battle-scarred X-Wing. It has blue pinstripes and will sit in the woods of the hidden Resistance base camp. This is located just outside the Black Spire village.

A combination of speed and firepower make the nimble X-Wing ideal for dogfights. The starfighters come equipped with four laser cannons, two proton torpedo launchers and an astromech droid co-pilot.

The full-size replicas of the X-Wings cost $250,000 each, according to Anaheim building permits. 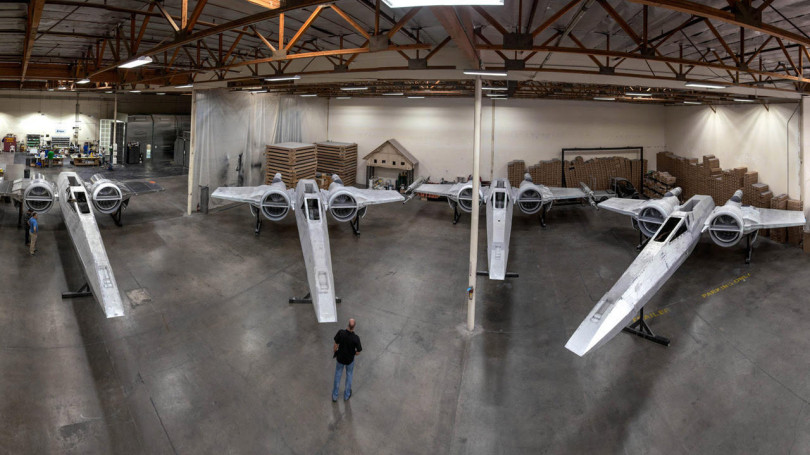 A red A-Wing Fighter will be docked next to the blue X-Wing in the Resistance base camp at Galaxy’s Edge.

“You’ll notice that there’s a very temporary nature to everything out here,” Imagineering executive creative director John Larena said during a tour of the land. “Basically the story we’re telling is the Resistance has set up shop here, probably in the past couple of weeks. Everything is ready to get swept up as soon as the mission gets called.”

The sleek and streamlined arrowhead-shaped A-Wing is designed for hit-and-run raids and lightning surgical strikes. It is also used for intelligence gathering missions. Known as a RZ-1, the twin-engined starfighter is armed with a pair of pivoting laser cannons and concussion missiles.

The A-Wings made their first appearance in “Return of the Jedi.” 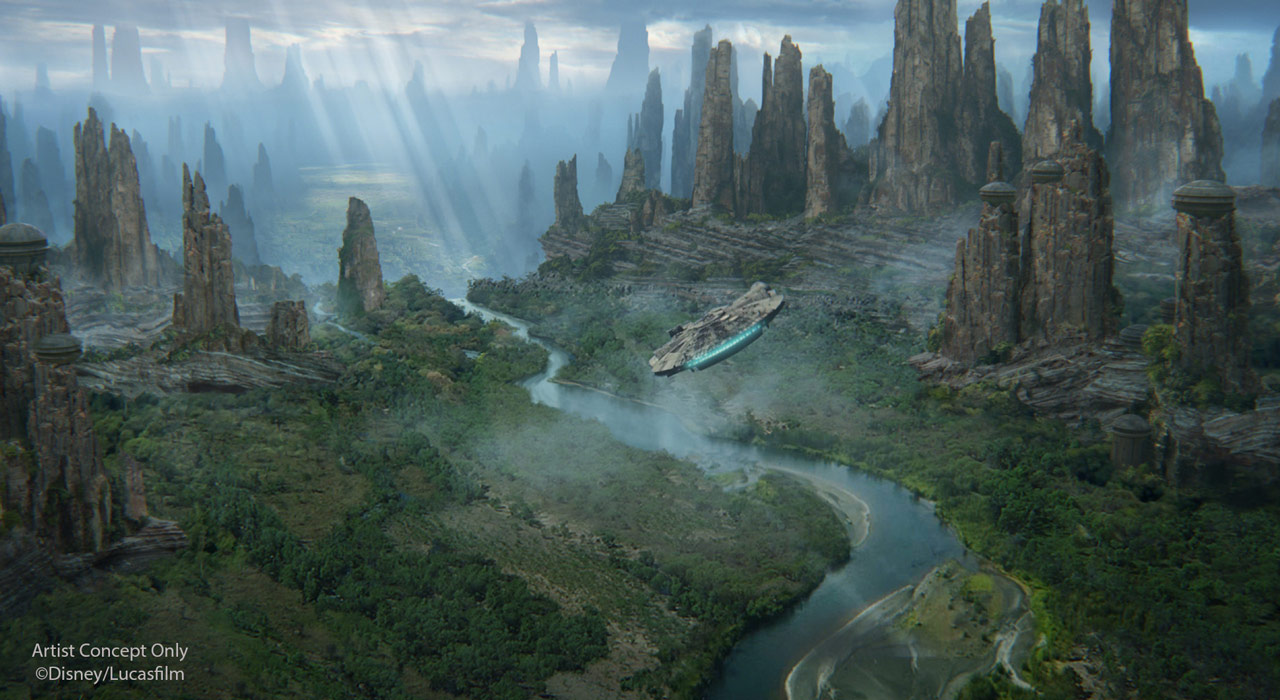 The landspeeder parked near the entrance to Black Spire village will be similar to the triple-thrust turbine X-34 that Luke Skywalker used on Tatooine in the original “Star Wars” film.

In the movies, a repulsorlift engine allows the landspeeder to float about three feet above the ground. In Galaxy’s Edge, strategically placed cargo containers will hide how Imagineering achieves the landspeeder hovering effect.

An additional landspeeder parked nearby replicates the anti-gravity crafts used on the Star Wars planet of Jakku.

Built from scavenged parts, Jakku Raider Speeders have side-mounted twin engines, a pair of steering vanes on the front and a sunshield over the two passenger seats.

A Jakku landspeeder was briefly seen racing past the heroine Rey and the BB-8 ball droid in “The Force Awakens.”

Both landspeeders will be parked in a garage near the Frontierland land entrance to Galaxy’s Edge.

Star Wars: Galaxy’s Edge opens on May 31 at Disneyland and Aug. 29 at Disney’s Hollywood Studios.

Question: what is the NAME/web site of the company that BUILT the smaller spaceships. I want a replica built. I have a budget of $300,000.00 US.
Thank you;

The China Attractions Expo 2019: VR galore and a busy show in the Forbidden City 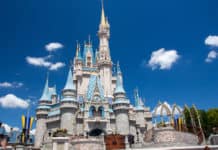