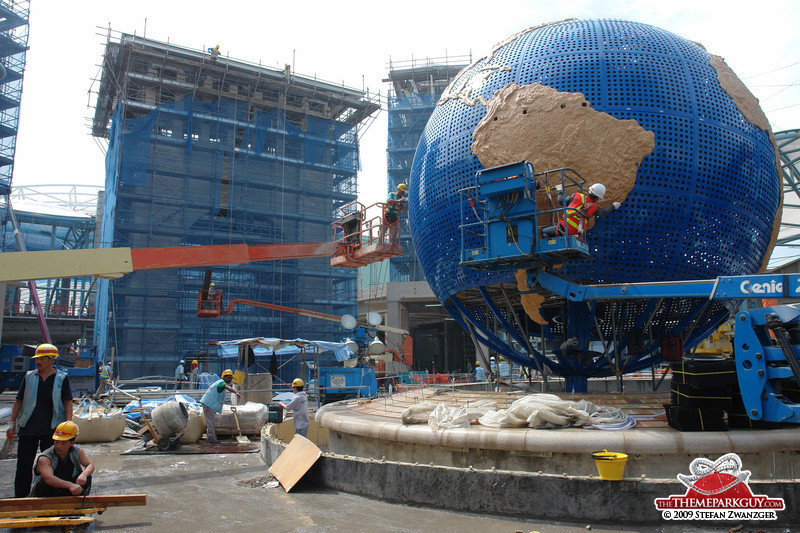 Stefan Zwanzger, known to many as The Theme Park Guy, is so passionate about theme parks that he has spent the last seven years travelling the world visiting, at last count, 293 parks in 122 countries from Uruguay to Kyrgyzstan. And he has a website to prove it including reviews, images and video together with a very recognisable hat.

the world indulging himself.  But his story so far is much more interesting and no doubt his future will be too.

He’s a self-made internet  entrepreneur who has reinvented himself once already in his twenties and is now looking forward to his next incarnation.

Blooloop talked to Zwanzger about how he has managed to ‘live the dream’ so far and what happens next.

Zwanzger, who has lived in five different countries and now resides in Abu Dhabi and Singapore, was born in Germany in 1979.  An early fan of theme parks he has particular affection for the parks visited during his childhood – Europa-Park and Disneyland Paris.

“Europa-Park (below) was a 3 hour drive from where I grew up, and when Disneyland Paris opened in 1992 I was 13, and obviously exactly the right age to be mesmerised by it..”

So how does the Theme Park Guy fund his travelling?  The answer is that Zwanzger is a born entrepreneur.  When he was just 19 he spotted the need for an online hub for affiliate marketing partners telling people how to use affiliate programmes to monetise their own websites and providing lists of programmes in different industries.  He left full time education to set up a website:

“I was studying for a very short time, about 3 months, and then I started my own business, first with a friend from school, later on my own. So I basically started right after school and I was lucky, it worked.”

After a couple of years of work things began to take off spectacularly.  “It was one of the first affiliate marketing sites in Europe.  It really worked well to be one of the first players in what was back then a rather undiscovered field of business, and an unsaturated market. The internet was virgin territory. There were no bloggers with website templates. If you wanted to be seen, you needed to design and code, or find people who were able to do so. Everyone was a pioneer.”

And what is the secret to creating a successful start-up?

“In my case, it was not about copying or adapting something that worked elsewhere, but about  looking for something fresh.  You have an idea and you just pursue it. You guys know that very well, you have have done an amazing job with Blooloop! Very few business ideas break even after one or two years – they actually need a little bit of time. I don’t have rich parents, so I kept my living costs as low as possible hoping that at some point there would be sufficient income to grow the business.  That happened.  It took

me about two or three years to make it but then it really took off.”

Nine years later he was able to capitalise on his hard work.  It wasn’t “a big sale” says Zwanzger.  “I’m not one of these guys who sold their businesses for tens or hundreds of millions.”

Although he had other people working for and with him, Zwanzger’s platform relied on his input: “It was not the big business model that worked by itself.  I sold parts of it. Other parts continued to create passive income. Other parts were phased out.  I was not as smart as other people who started online businesses and created systems that were attractive to investors as a self-running model. That was stupid. I think I’ve learned from it.”

After wrapping up his web business at just 29, his only problem was what to do next.  He came up with the idea of spending some time indulging his passion for theme parks.  So where did the Theme Park Guy come from?

“Why not, it’s a bit crazy, isn’t it!  Isn’t it great to have a stupid roller coaster hat and go running round the world shooting theme

Zwanzger’s website documents his travels, which include exotic destinations such as Iran, Chernobyl (below), North Korea and Turkmenistan, and visits to construction sites of the likes of Shanghai Disneyland, Universal Studios Beijing and Dubailand, with images, reviews and videos.

Surprisingly his interest in theme parks isn’t overwhelmingly focused on coasters.  He says that he appreciates the overall “feel” of the park as well as theming, storytelling, passionate employees and healthy food.

“I’m not the ‘coaster counter guy’.  I’m not that mesmerised by roller coasters.  I only have the coaster on my stupid hat because a ghost train or dark ride would have been too difficult to put there. The model coaster already breaks all the time. Imagine a ghost train with miniature animatronics!”

Zwanzger’s tastes have also changed with age: “It’s great to pursue thrills and have your stomach shaken, but we’re all getting older.”  He says that he is much more interested in storytelling and dark rides.

After years of visiting theme parks and attractions around the world, what developments would he like to see?

“Hopefully the next generation of dark rides will be a little bit more surprising and unpredictable.”

“I really hope that we’re going to get more moviemakers in the industry, who know how to create stories with twists and turns that really work. I think many dark rides are just a huge amount of noise and animatronics and there’s no real story to follow.Of course there are a few very good ones, but most of the dark rides today don’t work as a story experience. They’re advertised as ‘immersive’ , but that often just applies to the theming, the facade. In order to tell a story you have to have something to say, genuinely something to say, and then surprise the audience with something that they didn’t expect to happen, ideally not only once, but several times. How many dark rides do really fulfill these conditions?”

Are there any new theme parks being built that he’s particularly looking forward to visiting?

“Of course Shanghai Disneyland (above and below) and Universal Beijing because the investment into these parks is huge, they cater to the untapped, gargantuan Chinese market and the desire of all the suppliers and contributors to show what is technically possible is very high.  I’m really interested to see what Disney and Universal will produce for these parks.”  Zwanzger says that he is hoping for “some really awe-inspiring innovations. I’d also love to see new family-owned leisure parks where you can feel the warmth, passion and long-term commitment. But it’s not easy with the current theme park business model.”

Talking to Zwanzger, it seems that the exploring phase of The Theme Park Guy is coming to a natural end.  Someone who has built up a successful business at such a young age can be forgiven for spending some time having fun, but there is a strong impression that he has not been able to completely put aside his entrepreneurial urges over the years.

In addition to being the Theme Park Guy, Zwanzger has been unable to resist making some small side steps into film production, which brought him awards, as well as the online travel price comparison service OffHotels.com:

“I have some talented programmers so we’re always working on several things at the same time.  The Theme Park Guy and the themeparX Construction Board are the two biggest, but the OffHotels hotel site we set up last year I think is very useful for people that travel a lot. If you use price comparisons in conjunction with discount codes you can sometimes get hotel rates that are much, much lower than even the most favorable corporate rate you can find. We get results such as Hilton resorts by the sea, all inclusive, for $33 per night. Can you believe it?”

But Zwanzger is ready to move on.  He says that it’s not that he’s bored of theme parks, it’s just that he has seen more than he expected and he feels he doesn’t need to go to any more theme parks, standard or substandard, to learn what works and what doesn’t. Does he see himself making the move from explorer to operator or supplier?

“Absolutely that’s what I want to do now.  I have an attraction concept that I’m working on that I have had for a long time.

“Look I’m almost reaching the end of my journey because there’s not an unlimited supply of theme parks in the world and I’ve now been to around 300 of them, and that’s a lot. They can’t be built as fast as a human can travel. Sometimes I’m going through a jungle or a desert somewhere in a very remote country in a remote corner of the world and all I find is a ‘Wacky Worm’ or a ‘Wilde Mouse’ . That’s awesome for the locals, but dull for me. And so you realise that at some point it just doesn’t make sense to visit another provincial amusement park in some US state or Europe or elsewhere anymore."

“So I think I’m reaching the end of that discovery journey and the next step is to be active and productive.  It’s always easier to be a critic and reviewer, to put yourself in a position where you judge without producing.  That’s cheap and I think it even deserves condemnation (laughs). I think that if you use the education that you get from seeing so much on the ground to actually get something done you can make a positive contribution to any industry.”

No Castles, No Dinosaurs

Zwanzger is keeping things under his coaster hat for now.  Can we have any details about what he’s working on?

“No, not now.  But, there’ll be no cartoon characters, no Neuschwanstein Castle, no Main Street, no dinosaurs, no mummies, no safari, no jumping dolphins and no mountain roller coaster. It’s really something fresh! Not only the idea itself, but also the business model. Theme parks take some ten years to break even, which makes them such unfeasible businesses as a stand-alone concept.

"In ten years, you can have two presidents coming in and going out, a king dying, or a dictator falling. And you are invested in immovable, location-based entertainment. Not a good way to park your money, and only very few are successful with this. But imagine if you could bring the break-even point down to 2 or 3 years, and still create something quality and unique. That’d be amazing!”

By the Numbers: The Most ‘Liked’ Theme Parks 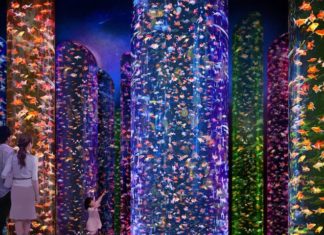 Following years of successful tours, the Art Aquarium is set to become a permanent attraction with more than 30,000 goldfish in Tokyo in August 2020. Art Aquarium is an... 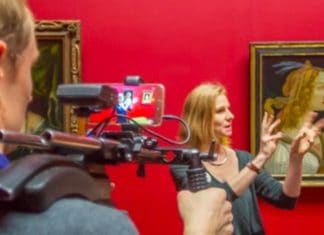 For many cultural organisations, such as museums, theatres and arts venues, COVID-19 has meant a pivot to an online presence. But as attractions move through a phased period...