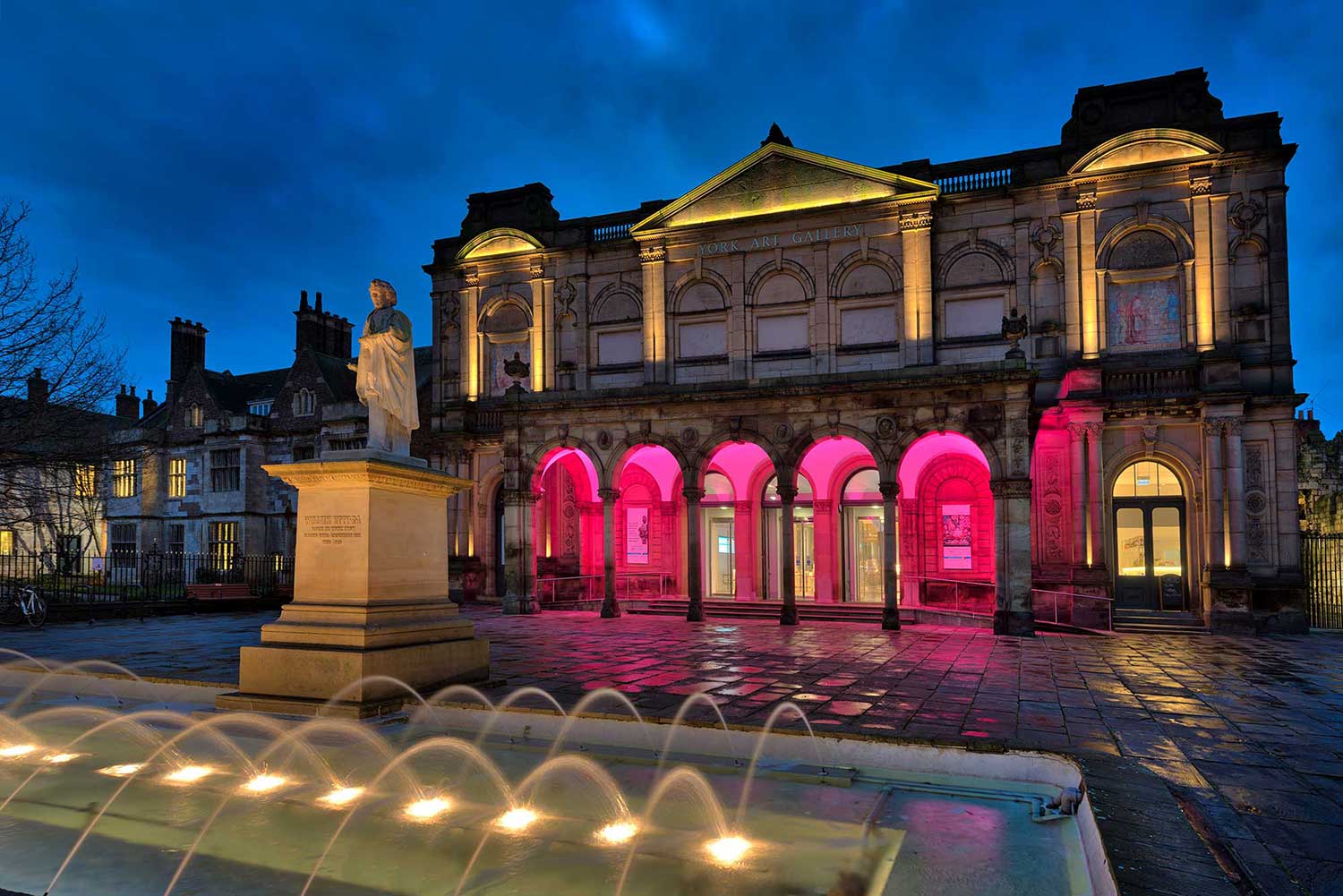 The York Museums Trust is breaking new ground with its Christmas at York Museum Gardens event this winter.

York Museums Trust, the charity responsible for operating museums, galleries and gardens in York, was founded in 2002.  This year it is revealing its Christmas at York Museum Gardens attraction, a collaboration with Lunchbox Theatrical Productions. 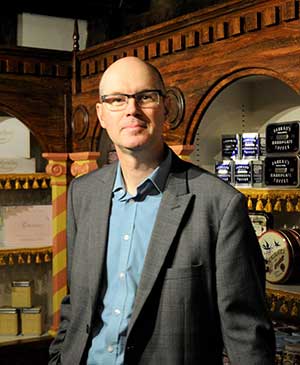 Blooloop caught up with Richard Saward, Head of Visitor Experience, to discuss the Trust and its work, the new Christmas event, and future plans.

Saward originally took a degree in catering management.  However he decided that a career in pubs, hotels and restaurants wasn’t for him. “I realised many of the management and customer service skills and knowledge were extremely transferable to the commercial aspect of museum and heritage attractions,” he says.  “You’re still dealing with the public.  You are still managing a team of people.  You are still managing a building.  You’re still getting involved in other aspects of marketing and finances. So 20 years ago I took a supervisory post at Eureka! The National Children’s Museum, in Halifax.”

This was followed by a decade at the National Coal Mining Museum for England. “I looked after the commercial department there: admissions, retail, catering, marketing, conferencing, events. Then I took a very similar role, but in a smaller organisation in Sheffield.  After that, not quite 12 months ago, I came up to York, to the Museums Trust.  It’s absolutely brilliant.” 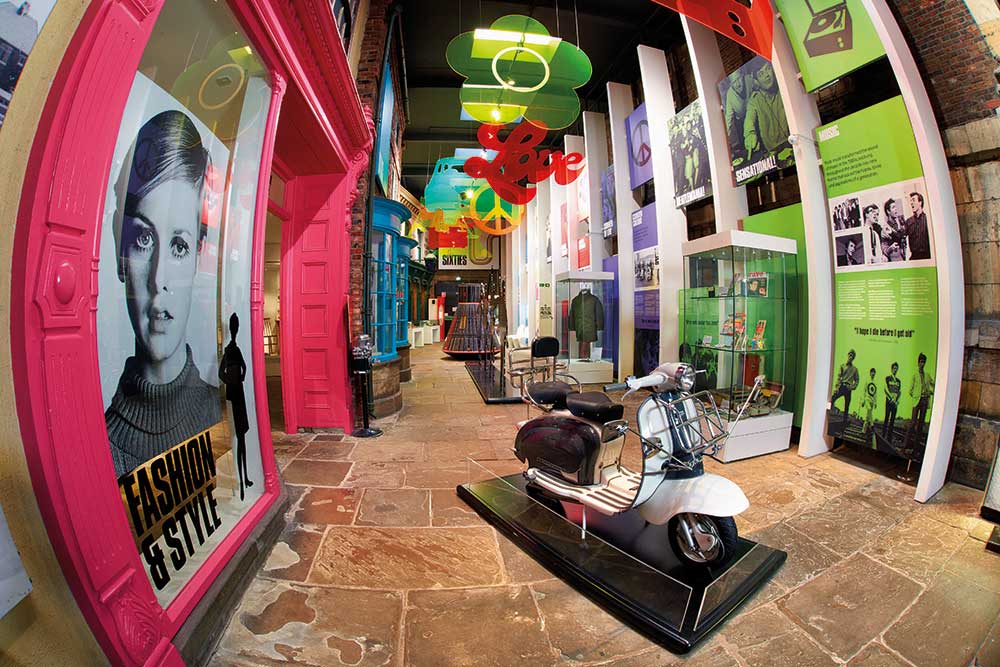 Saward explains that the Trust operates three major sites: York Castle Museum, Yorkshire Museum, and York Art Gallery.  “However I also have responsibility for the gardens,” he adds. “And we have retail outlets at all the museums.  Then we have contractors on the catering side and a thriving wedding business.  Plus the facilities team fall under my remit as well.  It’s hugely varied, and that’s what makes it exciting.”

“Each site is very different,” says Saward. “And we have to count the gardens as a separate, fourth site, because they are a heritage attraction in their own right.”

York Castle Museum looks at history from a social history point of view.  “We have our Victorian Street, Kirkgate,” he explains. “Then there’s our gallery of the First World War.  We have a lot of costume exhibitions.  Plus we have The Sixties – an area on the decade that saw such momentous change. We also interpret the building itself.”

The building comprises a former debtors’ prison and an adjoining women’s prison.  Both are Grade I listed. The museum’s name comes from its position on the site of the former York Castle. 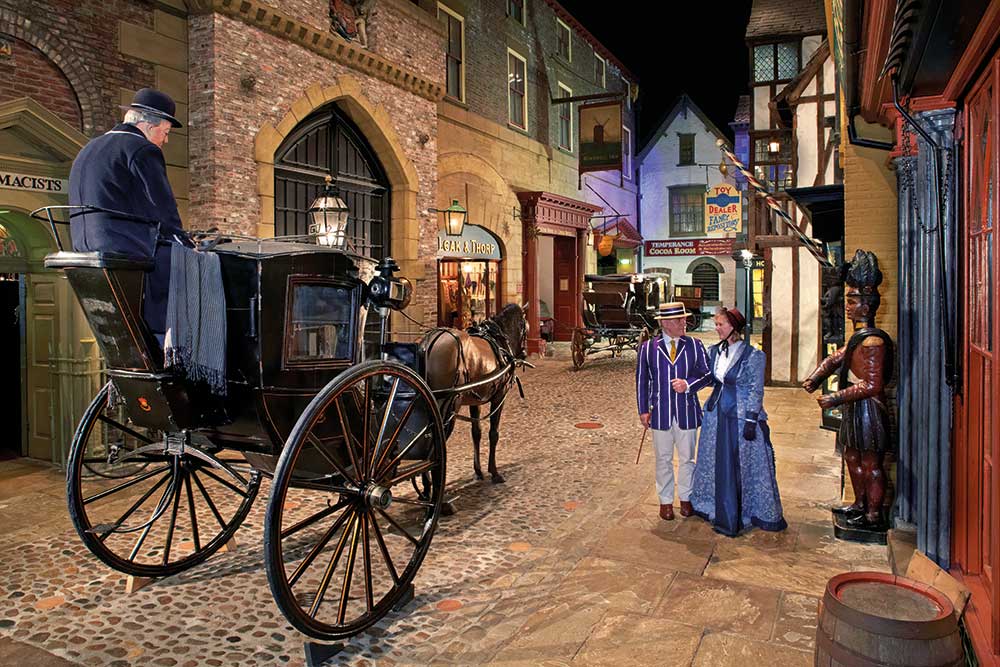 York Castle Museum has nearly 300,000 visitors each year.  It’s the largest and busiest of the Trust’s attractions and regarded by many as its flagship.

Treasure-houses of art and history

However the others sites are also treasure-houses. The Yorkshire Museum houses archaeological treasures, most notably the famous “York helmet”, as well as medieval jewels and statues of Roman deities. 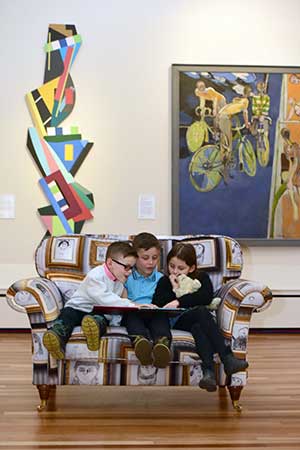 “The Yorkshire Museum looks at history up to medieval times,” says Saward. “So, the Romans, Vikings, early medieval history.  It has a slightly more academic feel. Records from these early periods are sketchier, so there is a lot more interpretive material. It has a very dedicated and loyal following, but also picks up on the school curriculum.  We have a lot of learning groups down here studying Romans and Vikings.  It’s a real strength of the Yorkshire Museum.”

He explains that both the collections and buildings still belong to the city of York and its people.  The Trust was created as a new organisation back in 2002 to look after them and operate them.

“As the Trust, we have worked very hard to programme exciting and challenging exhibitions in the art gallery.  We are building it up to become a key institution in the North.” 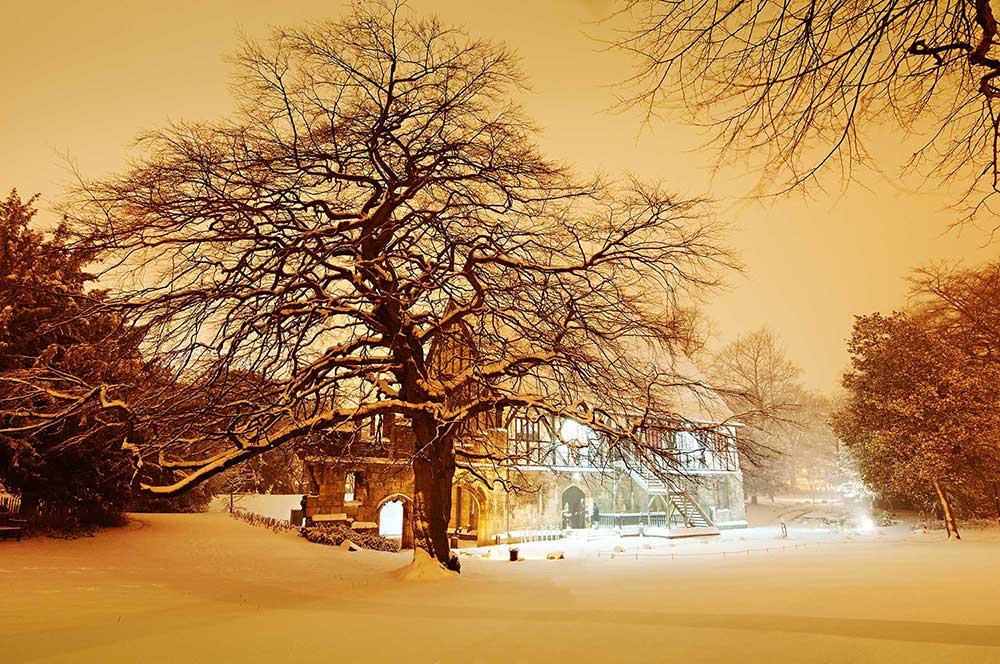 Christmas event is a new venture

The Gardens have hosted a variety of events in the past, including the famous York Mystery Plays.  However Christmas at York Museum Gardens is a new venture for the Trust. “We were approached by Lunchbox Theatrical Productions earlier on in the year about hosting a Christmas event,” says Saward. “At that point, the idea was a Christmas lights extravaganza.”

The Trust needed to be sure that any installations and activities would not have a detrimental effect on the gardens or buildings.  Lunchbox were happy to work within careful parameters.  The final result, Christmas at York Museum Gardens, is a collaboration.  Lunchbox Theatre Productions are international producers of live entertainment.  In York, they’re the company behind Shakespeare’s Rose Theatre, Yorkshire’s Winter Wonderland and THOR’s Tipi bar.  The third partner is Raymond Gubbay, a leading promoter of live events, in particular Christmas festivals.

“The event itself is going to take the form of a walk-through trail,” explains Saward. “It starts in our Christmas courtyard where visitors can indulge in mulled wine, hot chocolate and local food.  They also get to enjoy a vintage fairground.  Then they move on to explore a range of magical light installations, and projections onto the numerous historic buildings within the gardens. There will be an opportunity to walk past, and perhaps have a quick chat with, Santa in his workshop.” 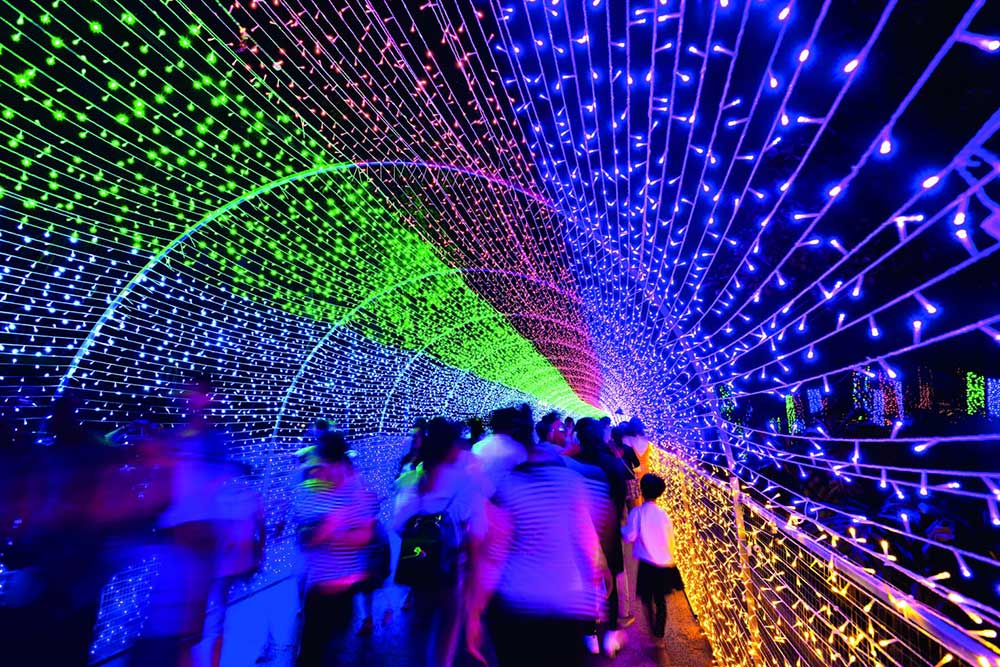 A specially commissioned light installation by a local artist forms one of the centrepieces.  The festive after-dark experience culminates with The Finale of Fire on the library lawn.

“It’s going to be really exciting,” says Saward. “It works for the Trust; it works for Lunchbox Productions, and it works for the City of York.  Fills what is known as the ‘early evening economy void’.  People are looking for something to do after 5 o’clock, when the Christmas market and the shops are beginning to close.  However it’s still a bit early to go home. Or, equally, it’s a bit early to go out and have something to eat. This will provide that early evening impetus.  Equally, people might want to come a bit later, having been out for a meal.  They will come to finish their evening with the lights. 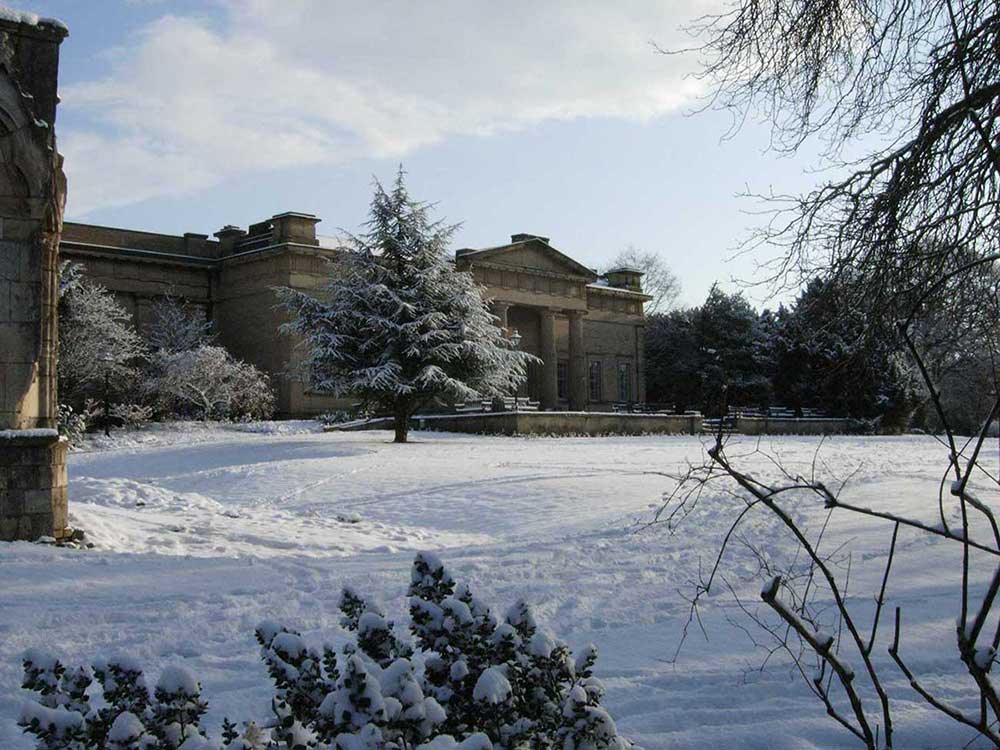 “So we are hoping to cover several markets.  We also have high hopes that it will be a really fruitful partnership.”

Museums “need to exploit their assets” to generate revenue 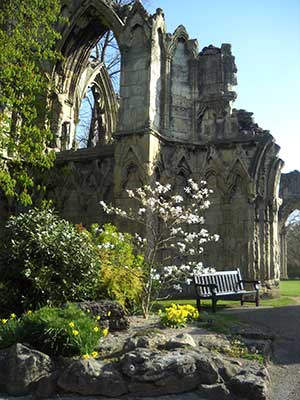 York Museum Trust is primarily funded through the City of York Council and the Arts Council. “As a trust, we actually earn a vast proportion of our revenue ourselves,” Saward explains. “We do that through our admission figures, through our commercial operations in catering and retail, and through a successful weddings business.”

He says that the partnership with Lunchbox is one more way of generating revenue. “We do receive Arts Council funding from Arts Council England, and we get support from the local authority,” he says. “But, in this day and age, museums do need to exploit their assets. What we do find is that it gives us the opportunity to invest in world-class attractions. We have aspirations for the gallery to be seen as the art gallery of the North. However, without investing in the buildings, the artworks, the exhibitions, we are not going to reach the standards to which we aspire.”

The Trust’s aspirations reach much further. “We are just in the process of our next five-year planning process for the Arts Council,” says Saward. “We are in the early stages of scoping out and planning a large and very significant redevelopment at the York Castle Museum. 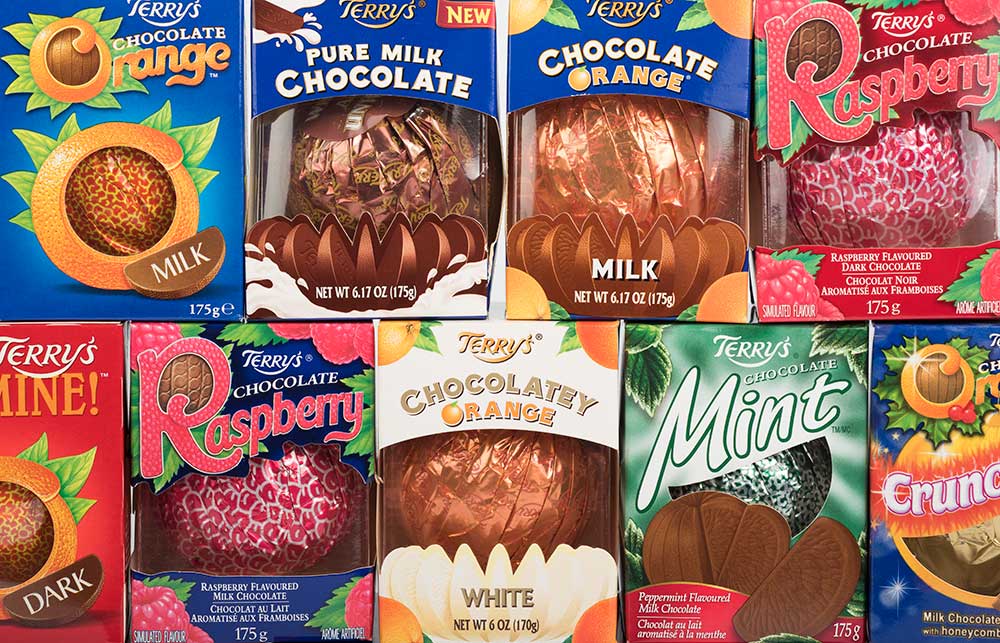 “(the plan is) to reinterpret the buildings, and really look at the stories that resonate from the buildings, and from the people of York itself.  We want to bring out this huge Victorian collection that comprises 30,000 pieces of costume.  Plus we are also currently working on a very large collection of chocolate ephemera and memorabilia, which ties in with York being a chocolate city.”

He explains that the redevelopment is still in very early stages. At present the Trust is scoping out the remit and size of the redevelopment.  “We’re working on the stories that we want to bring out, which will, obviously, impact on how big a redevelopment we undertake. 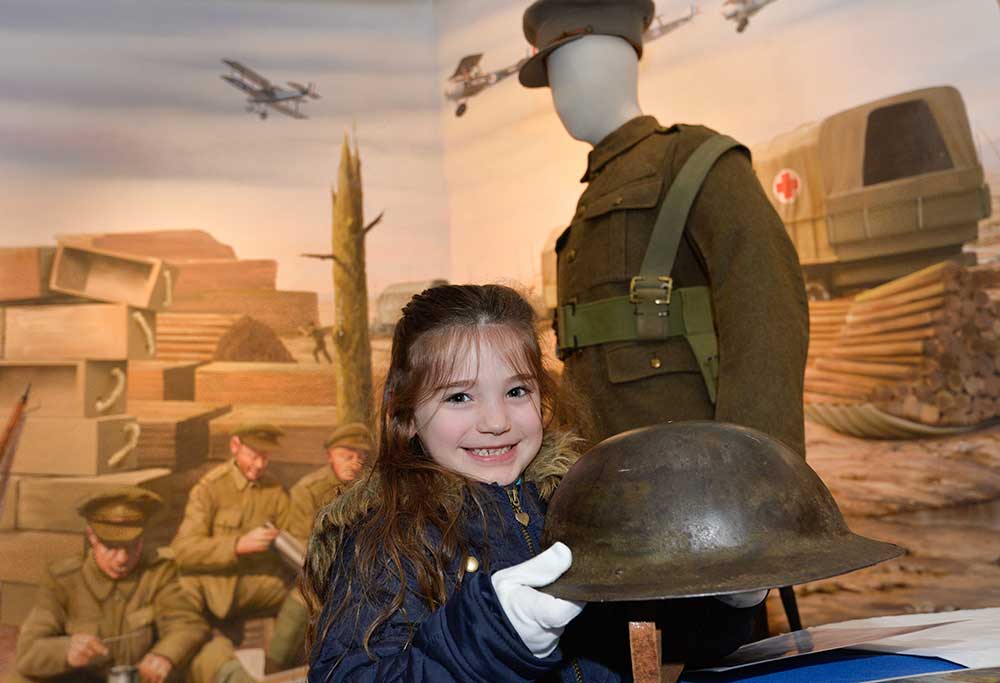 “There will be a couple of years of planning before we start looking into the funding.  Then, depending on the funding, it could be four or five years before we put a spade in the ground.” 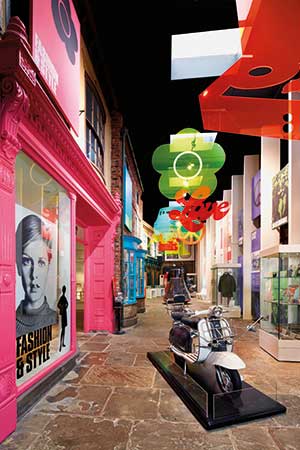 The attractions industry is becoming increasingly customer led and customer expectation drives standards. This, according to Saward, is something that characterises the heritage sector.

“It’s true on many different levels. From the customer service aspect, people really are expecting the highest standards now. 20 or 25 years ago, when I was in catering, people used to try and differentiate themselves by having good service.  Now it is an expected norm.

“Also, we are competing with the idea that people can see so much on the Internet.  They might think: why do I need to come?”

At the same time, digital enhancement is breathing life into museum artefacts and ideas. “Our Viking exhibition, which is about to go travelling, has had some fantastic reviews of its virtual reality headsets,” says Saward. “They immerse you in the experience of a Viking encampment.  It’s something we developed with the University of York and the University of Sheffield.  It is just so lifelike. I think there is a huge untapped potential within the digital world.”

From another perspective, technology is making the collections accessible in ways they have never been before. “The Castle Museum is horrendously difficult for us to make accessible for everybody,” Saward laments. “However Google Street maps has been round the museum now, so we are able to put it on the Internet. Someone who can’t physically get to it, can still access it virtually. I think that is one of the big opportunities in the heritage sector.” 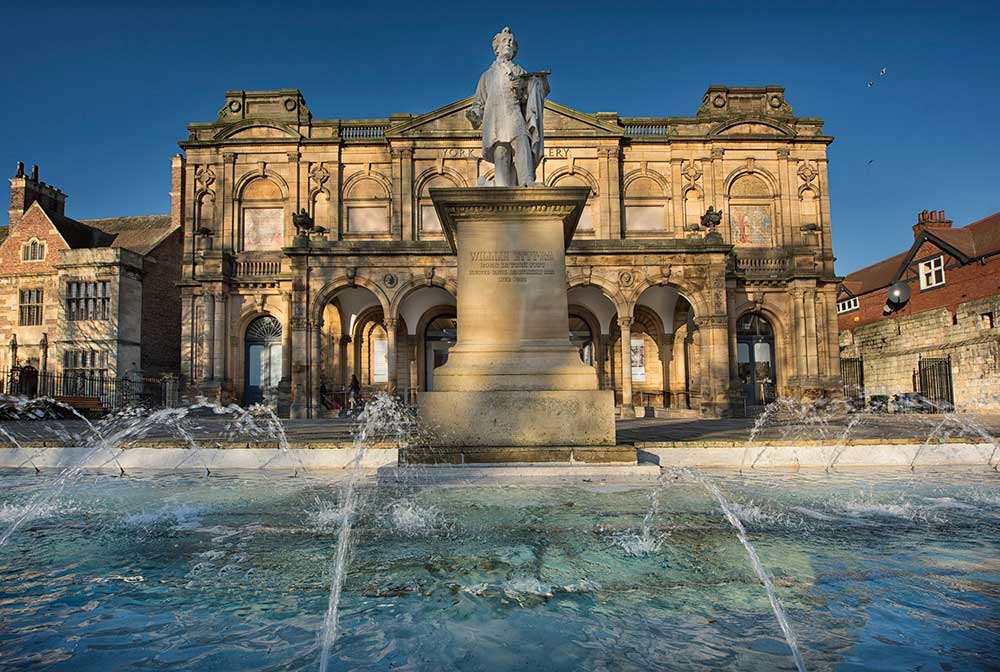 Funding continues to be a challenge. “People are worried about the pound in their pocket, and a day out to a museum is a nice thing to do rather than an essential,” says Saward.  “However we are very keen to work in a broad way with different communities.  We have explored some difficult subjects in terms of some of the exhibitions we have done.  Hopefully, by being challenging and provoking, we can maintain a place and a relevance, as museums and galleries.”

Chocolate drops: Hersheypark GM Kevin Stumpf on new rides, The Boardwalk and a touch of Broadway