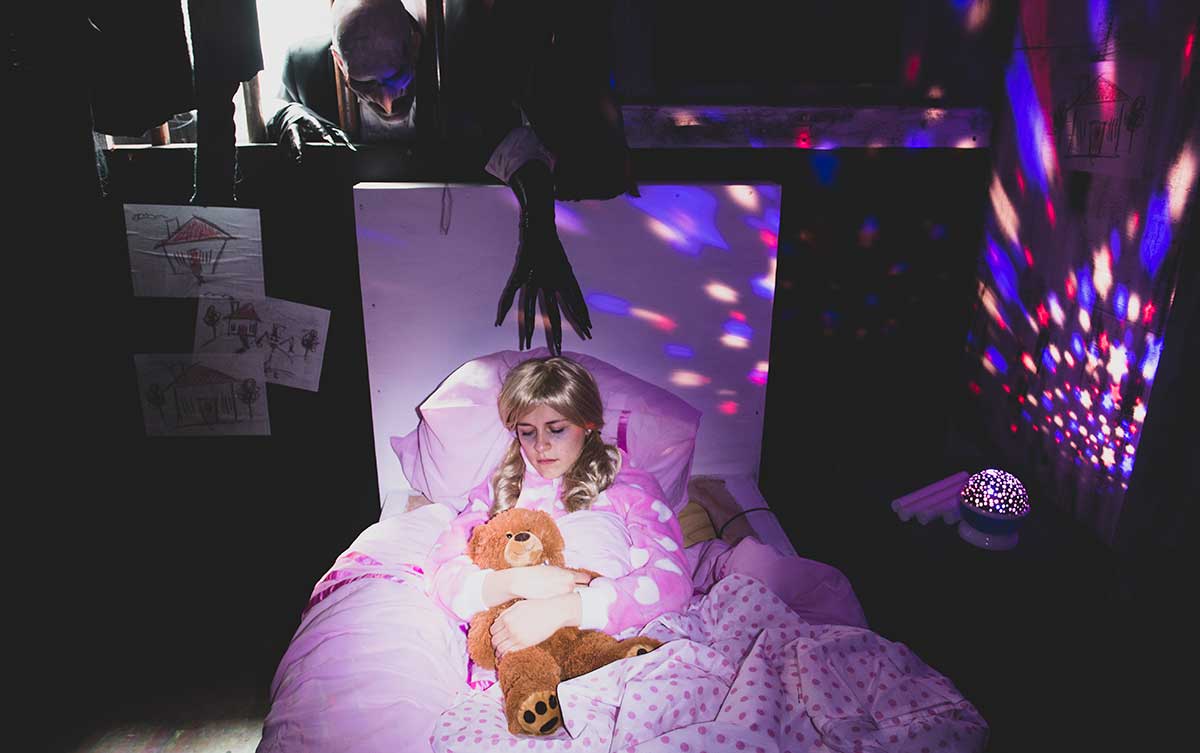 Screamfest, the annual Halloween event that takes over National Forest Adventure Farm in Burton, has always been popular with fans of haunted attractions.

But this year’s offering presented something unique: a maze that was theatrical, immersive, psychological and deeply unsettling.

Insomnia was designed by Andrew Porter‘s firm AJP Designs. The maze is the result of three years of thought. An original story and concept, the maze takes you inside a child’s nightmare. Unlike others, this maze has a clear narrative and named characters. There are jump scares, but also less traditional psychological tricks at play.

Attractions with a ‘pulse’

There’s a great deal of theory behind the maze, the result of years of experience. Every attraction, whether a horror maze or a children’s boat ride, follows the same storytelling theory perfected by Porter.

Attractions need to have a pulse – with moments of intensity complemented by moments of peace. Overwhelming visitors causes them to shut off. Horror mazes that hit you with jump scare after jump scare will eventually cause you to become immune to the jumps and lose interest in the maze. 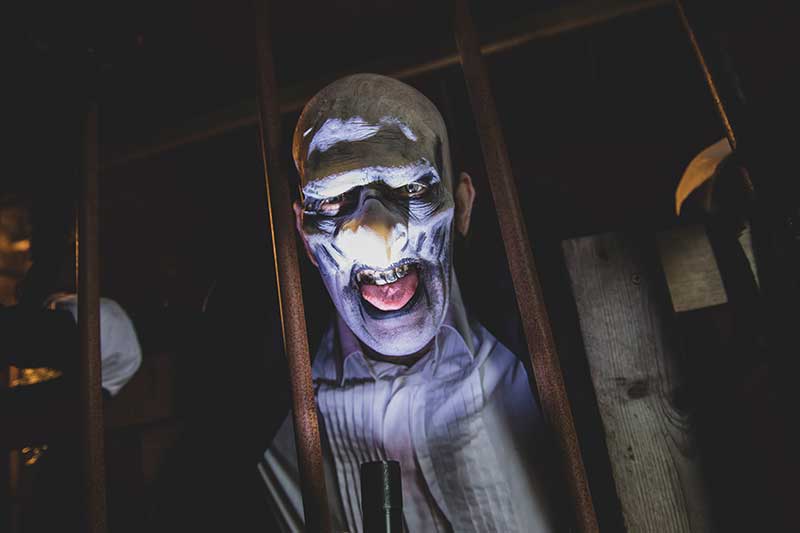 Insomnia begins before you even set foot in the maze, with a theatrical queue line. Across two scenes, audiences are introduced to the story of Tabitha – a little girl with vivid and horrifying nightmares. Actors can trigger various scenes. In one, Tabitha’s mother turns out the lights and a nightmarish creature – Crackerjack – appears in the wardrobe.

The actress playing Tabitha also interacts with guests. The interaction gives guests that highly desirable personalised moment in attractions. But as well as being entertaining, it is somewhat unsettling, and creates an emotional bond with the character that makes the following scenes all the more traumatic.

This early immersion is a perfect fit for the queue line while people are stationary and can watch and get to know the story. It also makes the queue feel a lot quicker, and the various scenes can promote repeat visits. 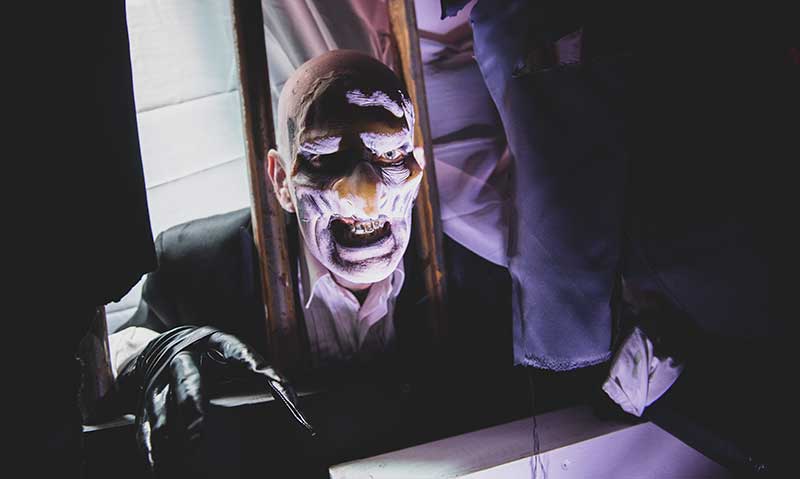 Creating a scene you should never see in a horror maze

Insomnia follows this theory to a tee but it is not like other mazes. It contains numerous scenes that, as Andrew puts it, “should never appear in a horror maze.”

A living room, child’s bedroom and even a child’s drawing brought to life. There are no dark corners or shady elements – these are inviting scenes that add to the eeriness of the story.

The audience instinctively moves out of the dark scary space into the inviting bright one.

It’s these scenes that Andrew believes have contributed to the huge improvement in throughput. Following a dark pre-show in a tight cupboard, the door opens to reveal a bright and colourful scene. The audience instinctively moves out of the scary space into the inviting one. This allows the next group to be dispatched faster. In nearby mazes, the pre-show ends to reveal an actor, or darkness, and groups prefer to stay put than move forward. They have queues of up to an hour, yet Insomnia rarely exceeds 15 minutes.

Of course, Andrew says, this approach will not work for every maze – but it is an interesting observation and follows the model of attractions with a pulse.

While many horror mazes end with guests being chased down a dark corridor, or perhaps one big jump scare, Andrew is not a fan of the traditional horror maze finale. That final jump is predictable, and to some extent betrays the trust of the audience. “You should always leave them wanting more,” says Andrew.

And many of the attractions at Screamfest demonstrate Andrew’s principle that guests want to laugh – not cry – when they leave an attraction.

In Insomnia, the final scare comes from a cross-dressing demon. In another maze, it’s a chainsaw wealding professor who chases you out to a Benny-Hill style soundtrack.

One of the reasons Insomnia works so well is the simplicity of the story. We are introduced to a little girl, then enter her nightmares, and finally wake up. So it might be surprising to learn that Andrew has hundreds of pages of back story. Each character is fully shelled out with motivations and history. Visitors are directly exposed to none of this story in the maze – and Andrew thinks that’s a good thing.

A maze doesn’t need to spell out every detail for the visitors, else the story risks being lost.

A wider context to an attraction

Screamfest’s appeal is truly in its diversity. Each maze offers something different to terrify and delight each individual. Crucially, Andrew says, every maze must be top quality so that the attraction is consistent. One standout maze is not a good thing, it means the rest of your mazes aren’t up to scratch. 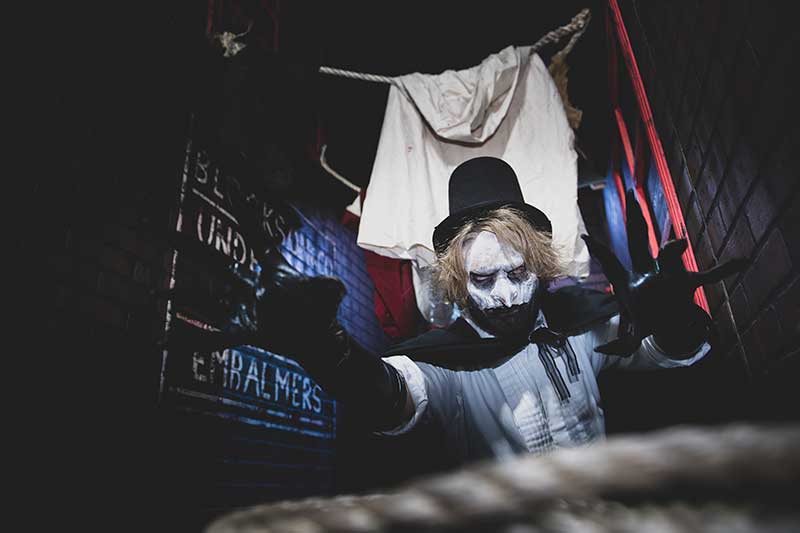 Also, each maze creates a new offering that appeals to different demographics. A maze like Insomnia draws an older demographic. “Just having that older audience there calms down the teenagers and creates a nicer atmosphere for everyone,” says Andrew.

So – when is a horror maze not a horror maze? Insomnia creates a longer lasting psychological scare through careful and controlled storytelling and in-depth characters. It deploys theatrical techniques in the traditional horror maze setting and explores new ideas while staying true to the form. Andrew’s experimentation with storytelling in this way has therefore been a success, and I’m excited to see how it develops next year.

Paying the price for your theme park (and parking) experience

All Aboard The Postal Museum