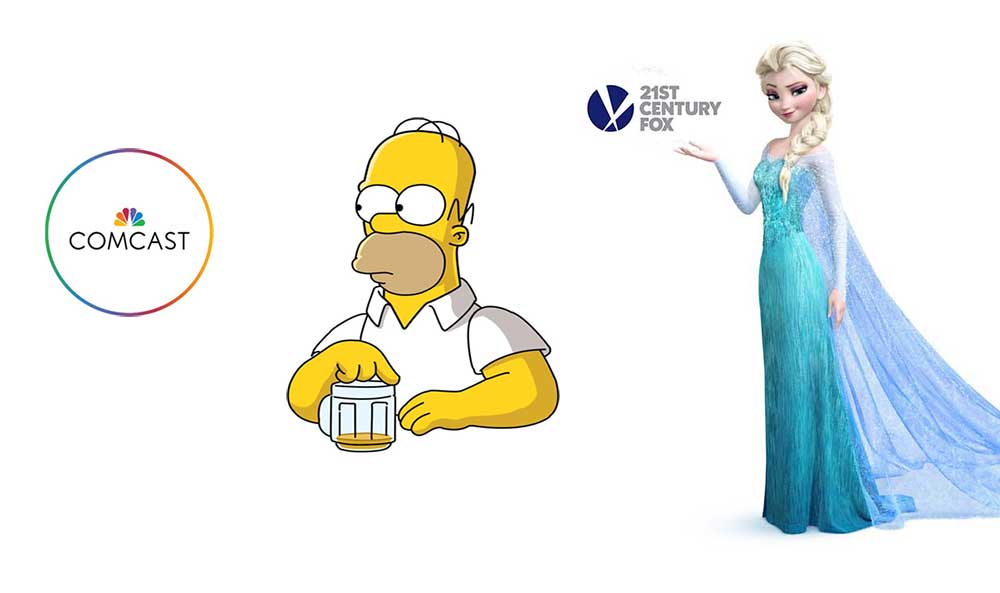 The battle for 21st Century Fox takes a new twist as Comcast re-enters the bidding game.  Comcast Corp has confirmed it will top Disney’s US$50billion offer for Fox assets and iconic IPs.

Comcast Corp, the parent of Universal theme park operator NBC Universal, says it is in ‘advanced stages’ of preparing a higher, all-cash offer for the businesses, networks and IPs that 21st Century Fox had agreed to sell to Walt Disney Co.

The offer, while not definite, is said to be both ‘superior’ and ‘at a premium’ compared to Disney’s all stock offer.

“While no final decision has been made, at this point the work to finance the all-cash offer and make the key regulatory filings is well advanced,” said Comcast.

The saga has been running for some time. Comcast sought to gain the majority of Fox’s assets in an all-stock deal last November (valued at US$64 billion).

Then, on 12th December, Comcast announced that it was formally dropping out of the bid for 21st Century Fox’s assets.

Two days the Walt Disney Company announced that it was acquiring the 21st Century Fox package for around US$52.4 billion in stock (subject to adjustment). The deal was said to include the company’s film and television studios, cable entertainment networks and TV businesses. Vitally, it would also garner IPs such as X-Men, Avatar, National Geographic and The Simpsons.

The Fox acquisitions would firm up the Disney offering against streaming rivals Amazon and Netflix. However Disney shares proceeded to fall nearly 3.3 percent, meaning the value of the offer was reduced to just over US$50 billion.

Then, on 6th February, it seemed that Comcast was having a change of heart and was considering outbidding Disney.

Sources claim that Comcast has been preparing bridge financing from the start of the month for a cash offer for the Fox assets. However this latest statement is the company’s first formal confirmation.

Comcast Chief Executive Brian Roberts is reported to have said he won’t proceed with a bid unless a federal judge will permit AT&T’s planned US$85 billion acquisition of Time Warner to go ahead.

“It all depends on the AT&T and Time Warner deal,” says Brian Weiser, analyst at Pivotal Research Group. “If that goes through, it is highly possible there will more than one bid for Fox.”

Neither Fox nor Disney have chosen to comment at this stage.

Comcast has also made a US$30 billion offer to acquire the 61 percent of European pay-TV group Sky that Fox does not already own. It beat an earlier offer by Fox for the whole of Sky.