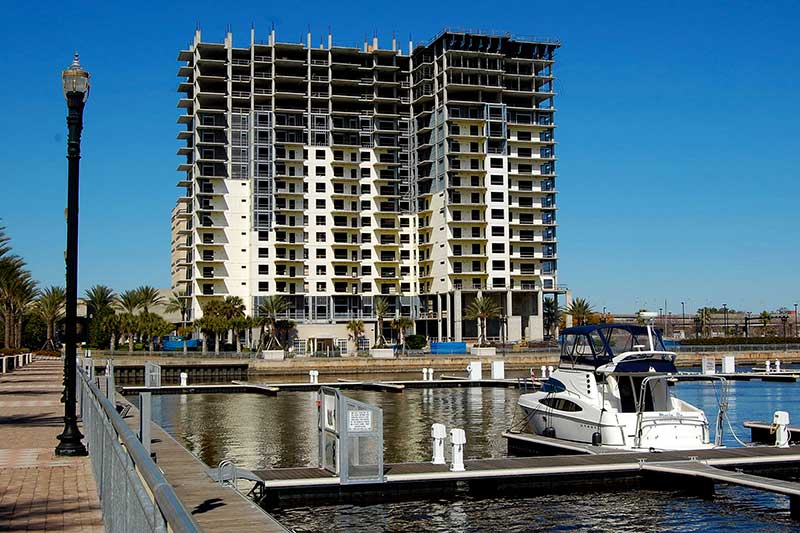 Barrington Development will develop the Berkman Plaza II and is planning a resort hotel with rides, themed restaurants and a family entertainment center.

A half-built condo tower on the Northbank will be redeveloped by Barrington Development in a $122 million project. It will include a 340-room hotel, a water park, arcade and a parking garage.

In a release, the company said: “located adjacent to the hotel will be Florida’s newest indoor/outdoor family entertainment center with a state-of-the-art arcade with over 200 of the newest and most popular games, indoor attractions including ropes courses and a rock wall with amusement rides outside along the river’s edge; this property will have something for all ages.”

The project could receive financial support. The Downtown Investment Authority will vote tomorrow on a $36 million incentives package that would include a 75% tax rebate over 20 years, and an $8.25 million performance-based incentive.

Incentives would also include a $3.25 million grant to complete the redevelopment and 3 acres of city-owned property, valued at $1,635,200 million, for the developer to build a parking garage.

DIA CEO, Aundra Wallace, said the Investment Authority has been seeking a developer for the Berkman II for three years. He said: “I’m pleased that Barrington Development stepped forward to purchase the property.

“Additionally, their plans are consistent with the theme of DIA’s Market Study conducted in 2014 which spoke of a sports, entertainment and convention district east of the Main Street Bridge. We look forward to this project moving forward and transforming the existing blighted structure along the East Bay Street corridor in Downtown into a hotel with a family entertainment venue.”

The company previously developed a 76-room White House Hotel in Biloxi as well as two Margaritaville hotels, one in Biloxi and another in Vicksburg, Mississippi. Disney Channel Fan Fest is returning to Disneyland Resort and expanding to Walt Disney World Resort, from May 2020. Guests will get to meet stars from the Disney Channel. ...