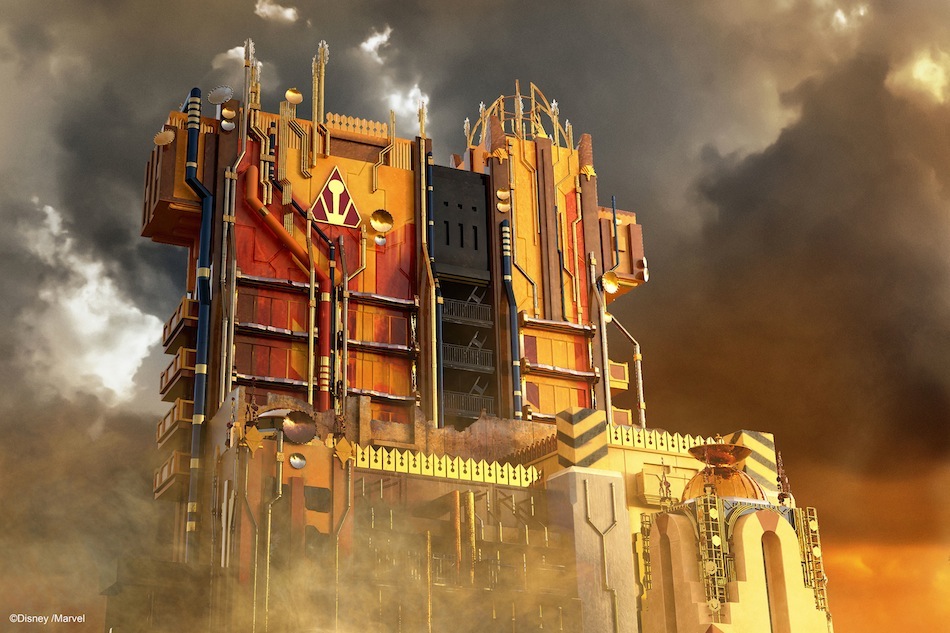 Disney has given a sneak preview of the Guardians of the Galaxy – Mission: BREAKOUT! attraction opening in a month’s time at Disney California Adventure. Guests are promised a choice of six random ride experiences.

The former Tower of Terror freefall elevator gets a new lease of life on May 27. Gone is the old Twilight Zone theme, and in comes a storyline inspired by the Guardians of the Galaxy movie franchise from Marvel.

Perhaps the most dramatic transformation is to the outside of the building. Now known as the Collector’s Fortress, it is named in honour a villain from Guardians of the Galaxy. “It’s weird, it’s bold, grandiose and it’s arrogant, like the character,” says Danny Handke, creative director on the project for Walt Disney Imagineering.

The storyline of the ride is that The Collector has captured five Guardians and put them on display inside his fortress. So proud is he of the collection that he has opened his fortress up for tours. While visiting, guests encounter escapee Rocket, who encourages his fellow Guardians to escape too. This is where the freefall part of the ride comes into play, with a few subtle changes over the Tower of Terror version. 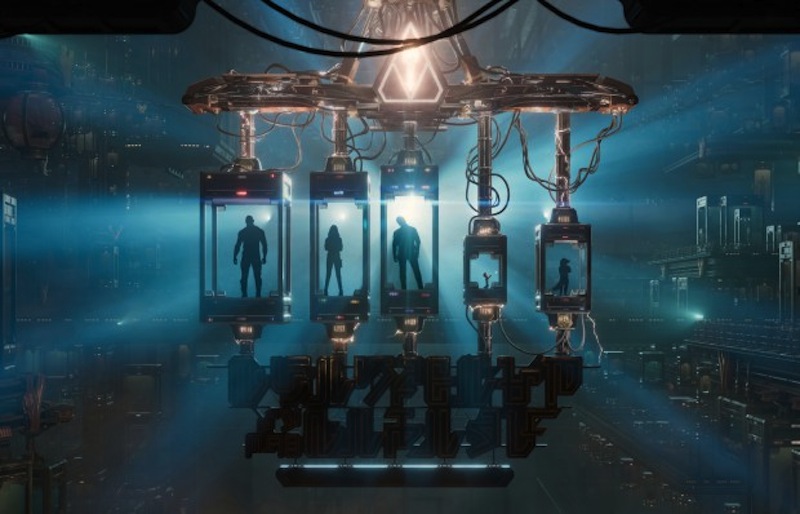 Video as seen by guests on Guardians of the Galaxy – Mission: BREAKOUT! (Photo: Disneyland Resort)

Joining Rocket, one of the galaxy’s most unusual heroes, guests will embark on a daring plan to free the Guardians from The Collector’s Fortress. Further characters accompanying guests throughout the attraction are as follows:

• Star-Lord (aka Peter Quill). A headstrong intergalactic adventurer, he was taken from his Earthly home at a young age, growing up in outer space. Equipped with a high-tech blaster and a mix-tape of ’60s and ’70s music from home, Star-Lord leads an unlikely team of interstellar misfits. Park visitors may also join see Star-Lord perform in Guardians of the Galaxy: Awesome Dance Off! several times daily elsewhere at Disney California Adventure.

• Gamora. Highly skilled in hand-to-hand combat, martial arts and stealth techniques. A daughter of the evil Thanos, Gamora sought to escape her violent past and build a new life free from prior sins. Guests also will see Gamora during Guardians of the Galaxy: Awesome Dance Off!

• Drax the Destroyer. A headstrong warrior whose reputation is both feared and respected throughout the sector. Despite his formidable outward appearance his lust for battle conceals a compassionate heart.

• Groot (aka Flora Colossus). A tree-like creature of few words, and best friend of Rocket. Extremely powerful and resilient, Groot has the power of regeneration, allowing him to re-grow limbs and even his entire form very quickly. He also appears in Guardians of the Galaxy: Awesome Dance Off!

• Apheta. Director of operations for the Tivan Collection. Although this sounds somewhat important, she remains under the thumb of the Collector with her every order and every move scrutinised.

• Mantis. A strange alien who ingratiates herself with the Guardians with the help of her empathic powers. These abilities allow her to read the underlying emotions at play within the group.

The six ride profiles offered inside the attraction are synchronised to music of the 1960s, ‘70s and early ‘80s. These experiences are the result of extensive research and experimentation by the creative team from Walt Disney Imagineering (WDI). The Imagineers boarded the attraction’s gantry lift, donned headsets and played different tracks to see which songs worked best. A strong identifiable back beat and a memorable hook were key to their choices.

Guardians of the Galaxy composer Tyler Bates also wrote the music for The Collector’s Fortress lobby and office scenes.

Disney California Adventure is one of two parks at Disneyland Resort in Anaheim, California. Speculation from Disney fans during a preview of Guardians of the Galaxy – Mission BREAKOUT! suggests more Marvel attractions coud be coming to Disneyland Resort over the coming years.