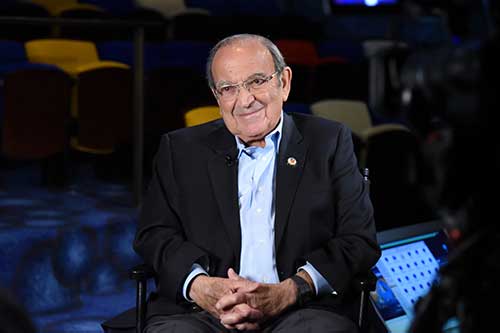 Marty Sklar spent 54 years working for Disney and was one of the last links to the generation of people who worked with Walt Disney himself.

He was born in New Brunswick, Jersey, on February 4th, 1934, and started working for The Walt Disney Company just one month before the opening of Disneyland in July 1955. His initial role was that of writer and communications specialist, writing scripts for various show and presentations for Walt Disney himself.  He was known as “the voice of Walt.”

In 1961, Sklar moved to WED Enterprises (which is now Walt Disney Imagineering).  He was part of the team tasked with developing attractions for the New York World’s Fair in 1964-65.

From 1974, he moved into executive roles.  He was a key force behind the creative development for shows, theme parks, Disney Cruise Line ships and Disney resort hotels.

He was the only person who not only worked on, but also attended the opening of all eleven Disney Parks, including the launch of Shanghai Disney Resort last year.

Sklar was the author of two books, Dream It! Do It! My Half-Century Creating Disney’s Magic Kingdoms (2013) and One Little Spark! The Road to Imagineering (2015).  He was inducted as a Disney Legend in 2001.  When he retired from the company in 2009 his name was added to a window in Disneyland’s City Hall.  However his involvement with Disney did not end after retirement.  Just two weeks ago Marty Sklar was at the company’s biennial D23 Expo in California.

“Everything about Marty was legendary – his achievement, his spirit, his career,” says Bob Iger, Disney Chairman and CEO.

“He embodied the very best of Disney, from his bold originality to his joyful optimism and relentless drive for excellence.  We will miss his enthusiasm, his grace, and his indomitable spirit.”

“Marty left an indelible mark on Disney Parks around the globe and on all the guest who make memories every day with us.”

“It’s hard to imagine a world without Marty, because Marty is synonymous with Imagineering,” says Bob Weis, President of Walt Disney Imagineering.

“His influence can be seen around the world, in every Disney park, and in the creative and imaginative work of almost every professional in the themed entertainment industry.”