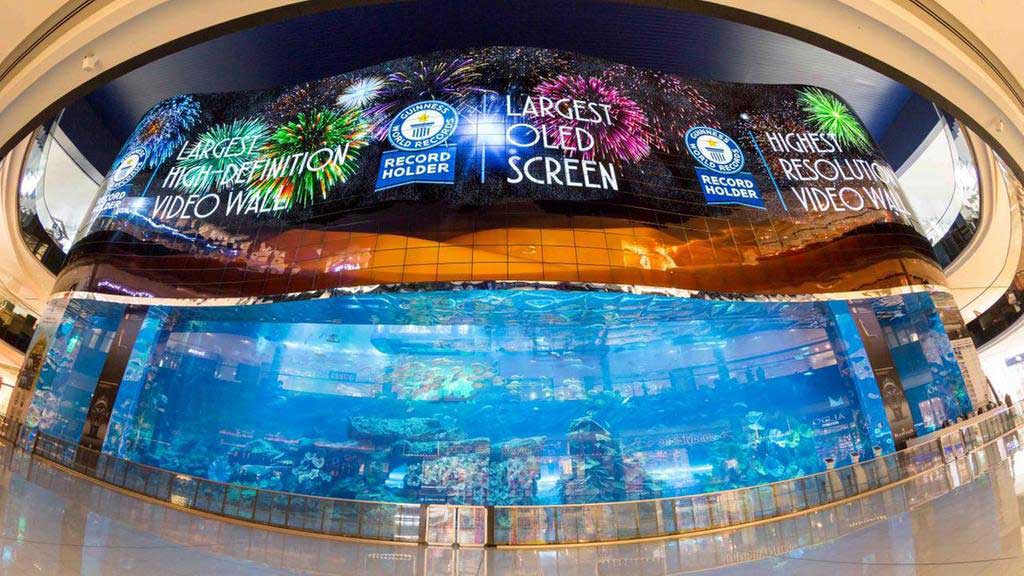 The Dubai Mall has unveiled an 820-panel high-resolution video wall.  The massive wall has broken records to take the distinction of being the largest high-definition video wall in the world.

It is also the largest organic light-emitting diode screen in the world, and the highest resolution video wall as well.

The flexible screen is placed above the giant ten million-litre tank at the Dubai Aquarium & Underwater Zoo, located on the ground level of the mall.  The tank showcases hundreds of sharks and rays, including the largest collection of Sand Tiger sharks in the world.

The new screen curves as visitors watch the mesmerising image of waves rolling over it.

The technology allows the screen to emit light without backlighting, making for stunning images, says Emaar Entertainment who run the attraction.

“We are proud to yet again provide a platform to recognise and share amazing moments, always eager to showcase these records and give companies or individuals a chance to be a part of an officially amazing experience.”

Dubai Mall is located in the heart of Downtown Dubai.  It is the world’s largest and most-visited retail and entertainment destination.  Aside from the world-famous Dubai Aquarium & Underwater Zoo, the mall is also home to KidZania®; the SEGA Republic indoor theme park; the 22-screen Reel Cinemas megaplex and the Olympic-sized Dubai Ice Rink.

The mall is owned by Emaar Properties.  Downtown Dubai is Emaar’s flagship development. The 500-acre neighbourhood is home to the iconic Burj Khalifa, and The Dubai Fountain, alongside The Dubai Mall.

LEGOLAND® Japan gets set to expand