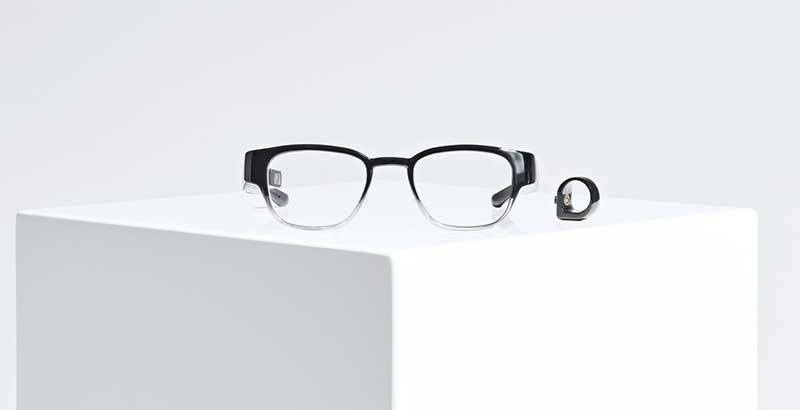 Focals have no screen, light filters through a holographic lens. This creates a holographic display that appears at arm’s length.

The glasses primary purpose is to show users notifications. The glasses can show text messages, navigation, calendar reminders and the weather. Using a joystick on a ring, users can interact with the display, including sending auto-responses to texts.

Designer Marie Stipancik says: “Digital presence is just as important as physical presence. But we want people to live with their heads up.”

Focals are currently available in Toronto and Brooklyn. They will be sold in high-end eyewear shops at a cost of $999 each. Each pair is custom fitted to users’ heads using scans of your skull.

The company has received financial backing from Intel Capital and Amazon.

One industry leader that has received investment from the likes of Google is start-up company Magic Leap. Last month, they launched their debut product the Magic Leap One Creator Edition. It currently ships for $2,295.

Microsoft is developing its own AR headsets. Called the HoloLens, Microsoft recently allowed customers to trial the headset at its retail stores.

However, many obstacles still face development. PC Mag points out that many devices are still bulky and have limited fields of view. Interactivity is still an issue too, with more development needed in devices that can interact with the virtual world. A review in Vox pointed out that the display was blinky, however this was attributed to the unpersonalised pair of glasses used in testing.