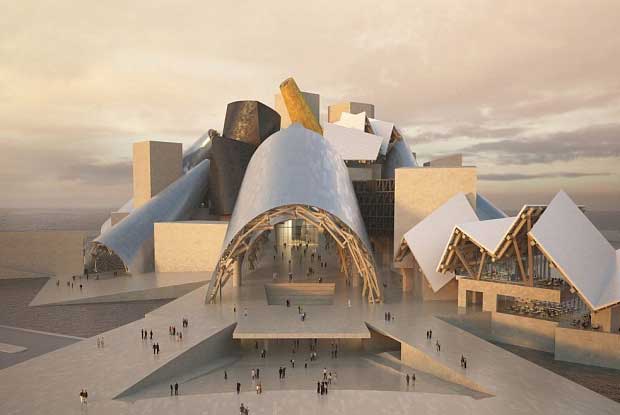 The Art Newspaper reports that Thomas Krens, the former director of the Guggenheim Foundation in New York, believes the plans to build a Guggenheim in Abu Dhabi should be postponed or downsized.

Krens negotiated the deal to create a Guggenheim in Abu Dhabi in 2006.  However, speaking recently in a podcast, he now believes that the Arab Spring and world financial crisis have changed the political landscape to such an extent that the risk of the iconic new building, designed by  Frank Gehry, becoming a target for terrorists has significantly increased.

The Guggenheim Abu Dhabi was scheduled to open in 2012 but construction on the building itself has yet to begin.

There are four other museums planned for the Saadiyat Island site.  Only the Louvre Abu Dhabi designed by French architect Jean Nouvel is near completion.

Krens believes the authorities should rethink the original scope of the cultural district and build up more slowly after seeing the response to the Louvre, which he says as a global collections rather than an American one, could be more favourably received in the region.

The Guggenheim remains committed to the project, and is reported to have issued a statement saying: “At a time when greater understanding among peoples and cultures is especially urgent, the Guggenheim Foundation remains committed to the Guggenheim Abu Dhabi and its transformative potential as a catalyst for exchange and for expanding the narratives of art history. A team of curators based in New York and in Abu Dhabi has been actively developing a curatorial strategy and collection for the future museum. As we continue to work toward the museum’s opening, we are pleased to work with our partners, the Abu Dhabi Tourism & Culture Authority, on a range of ongoing initiatives in education, public programming, and professional development as well as the recent opening of the second exhibition from the Guggenheim Abu Dhabi collection, The Creative Act, in Abu Dhabi.”