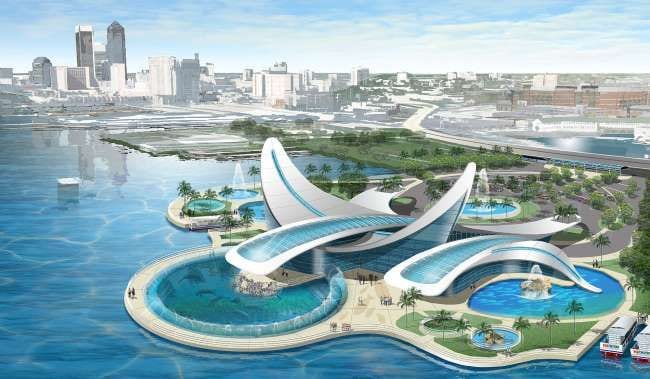 AquaJax have put together an artist rendering of the First Coast Aquarium, which would boast 150,000 square feet of indoor and outdoor space, as well as a 4D experience and boat excursions on the St. Johns River.

Currently, the attraction is still in planning. AquaJax hopes to locate it on the site of the Jackson Landing.

AquaJax treasurer Erika Sepega, who is on the board of directors, said (via News4Jax): “The education opportunities, the awareness opportunities for the environment, the green initiatives that could be possible partnering with the local universities.

“[We could] have the elementary schools that have marine focus providing laboratories and research opportunities.”

The company plans to include both salt and freshwater marine environments, and will focus on education and research in close connection with the University of North Florida, Jacksonville University, and schools in and around Jacksonville.

AquaJax said that its partner, Jacksonville Zoo and Gardens, would operate the aquarium – which is expected to attract 800 thousand to 1 million visitors a year.

First Coast Aquarium also hopes to serve as a launching point for its manatee rehabilitation programme, currently underway at Jacksonville Zoo and Gardens.

However, over 700 people have signed an online petition to stop further development and plans for the  First Coast Aquarium.

Jacksonville City Council President Aaron Bowman and the Downtown Investment Authority have not commented on the aquarium proposals.

Elsewhere, the Board of Aldermen has voted unanimously to approve Tax Increment Funding (TIF) for the proposed $51m Branson Aquarium, also known as the Aquarium at the Boardwalk.

If the TIF ordinances are formally adopted during the Board’s second reading today (February 26), Kuvera Partners, who also operate Branson’s Hollywood Wax Museum, will be able to move forward with the Branson Aquarium, on the site of the Grand Palace in Branson, Missouri.

If final TIF approval is granted, Branson Aquarium is scheduled to open in spring 2020.