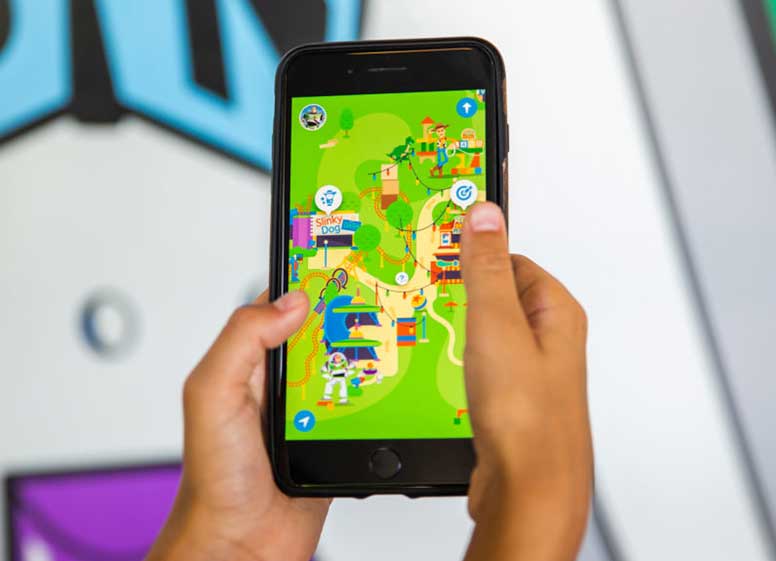 As Disney launches the Play Disney Parks app, the race is on to harness smartphones to take the theme park experience digital.

Over 90 percent of guests visiting Disney theme parks bring an extra visitor with them – their smartphones. That equates to a serious amount of smartphones. According to Statista, last year The Magic Kingdom attracted 20.45 million guests, while the Disney Animal Kingdom pulled in 12.5 million visitors. 12.2 million visitors attended Epcot in 2017 while 10.7 million people went to Disney Hollywood Studios. That was just Florida. Disneyland’s California parks snared a further 18.3 million visitors.

Dan Soto, vice president of the digital experience at The Walt Disney Company said that when Disney realised how high the figures for smartphones were, it created what he calls the “tipping point”. The company decided to introduce games for visitors to play while queuing at certain attractions throughout the US Disney World and Disneyland parks.

“Since 2013 we’ve been on a fairly aggressive track on the digital transformation of our theme parks and a lot of that is a direct response to the consumer,” says Soto, in an interview with Variety. “Our world is changing. We walk around with our smartphones all day long and have this thirst and demand for real-time information, for customizing and personalizing experiences, for leveraging technology to create a simple and seamless sort of consumer experience. So whether it be Magic Bands, which we introduced back in 2014 or the My Disney Experience app, all of those things have been all about how do we make your guest experience much more simple and seamless.”

Play Disney Parks, which launched on June 30, is available on both iOS and Android devices. The app includes games to play while waiting in line, music, trivia challenges and achievements. All it takes is data connection and Bluetooth capabilities (a spare charger is a good idea but the parks offer them for rent). The goal of the app is to add a fresh layer of interactivity.

New attractions being designed with digital in mind

Disney has been integrating video games into its lines for some time. Back in 2014, the Seven Dwarfs Mine Train opened in the Magic Kingdom. Touch screens offered multiplayer gaming in the style of “Bejeweled” for guests waiting in line.

“We’ve been exploring how to leverage interactive technology to even make your wait time experience feel better and more immersive,” says Soto. “Mine Train is a good example of where we have more physical kiosk-based interactive experiences.” He adds that Haunted Mansion also offers props within the queue that allow guests to interact. “But the new app allows us to unlock new models of gameplay through the ability to scale and introduce new games to the guest experience.”

Now attractions are actually being designed with apps as a vital part of the experience. Disney’s new Star Wars: Galaxy’s Edge and Star Wars hotel is being built with Play Disney Parks as an essential feature.

It’s not only the new Star Wars land that is set to expand the app’s functionality. “This launch is only the beginning,” says Soto. “We have plans to continue evolving the experience with more content, new technology and expanded experiences – including more in-queue games, new challenges, and achievements.”