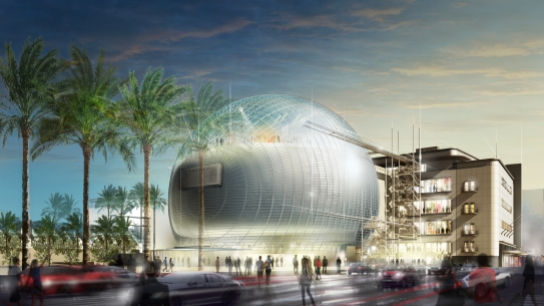 The LA Times reports that the Academy of Motion Picture Arts and Sciences is set to announce a $50 million gift from Cheryl and Haim Saban to the organization’s long-planned Academy Museum.

The donation is the largest so far towards the Academy Museum and represents a major step towards its fulfilment.

The donation from the Sabans brings the academy roughly three-quarters of the way toward its fundraising goal. They will need $388 million capital campaign for the museum.

The construction project has been in the planning for a long time. After a number of delays, it is now slated to open in 2019.

In recognition of the Sabans’ gift, the historic May Co. Building at the corner of Wilshire Boulevard and Fairfax Avenue that will be home to the museum will be renamed the Saban Building.

“This gift is a big jump in the capital campaign and we’re very excited about the fact that it’s bringing us within striking distance of its completion,” museum director Kerry Brougher told the LA Times in an interview.

The academy is also announcing that Ron Meyer, the vice chairman of NBCUniversal, will serve as the chair of the museum’s board of trustees. Other members of the board have yet to be announced.

Haim Saban made fame from his Saban Entertainment production company – the company behind the “Mighty Morphin Power Rangers” franchise.

Forbes estimates his worth at $3 billion. Along with his wife, Cheryl, he is one of L.A.’s most generous philanthropists

Disney CEO Bob Iger chairs the museum’s capital campaign and was instrumental in persuading the Sabans to donate.

“We owe all our livelihood to the entertainment industry,” Cheryl Saban told the LA Times. “Our whole family lives and works in this town, and the entertainment industry is what we’re about. When they described what’s going to happen at the museum, we became intrigued. When you consider that they’re going to be preserving and teaching about the art and craft of moviemaking and storytelling, we got very excited. There is nothing like it, and we decided, ‘Yes, we want to be a part of this.’”