SeaWorld Entertainment has lost a third senior executive in a week with Brian Morrow, vice-president of theme park experience design, announcing he is to step down.

Morrow is expected to leave the company in the next few weeks. His departure follows those of CEO Joel Manby and Chief Creative Officer Anthony Esparza. The exodus of top executives at SeaWorld started with the resignation of Manby last Tuesday. It was announced on the same day as the company reported that its net losses surpassed $200m in 2017.

Three days later, an internal memo published as part of a regulatory filing revealed that Esparza had stepped down. Interim CEO John Reilly announced that Mike Denninger, a 28-year veteran of SeaWorld, would be taking over Esparza’s role.

Manby and Esparza were relative newcomers to SeaWorld, having joined six months apart in 2015. They both came from theme park operator Herschend Family Entertainment and were brought in on the back of a decline in attendance and revenue following the documentary Blackfish, which criticised SeaWorld’s treatment of captive orcas. 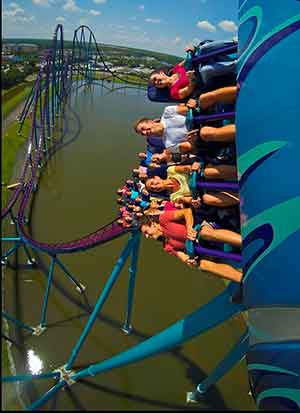 In contrast, Morrow joined SeaWorld in 2006 as director of design and engineering at its Orlando park. He was involved in projects such as the Manta and Mako roller coasters as well as Turtle Trek and Antarctica – Empire of the Penguin.

He was subsequently promoted to corporate director of creative development and then senior director of attraction development and design. In January 2016, he was appointed vice-president of theme park experience design. Morrow plans to set up his own production company when he leaves SeaWorld in the next few weeks.

The company cut 350 jobs in October last year as part of an effort to shed $40m in costs by the end of 2018. It is also investing more in marketing to combat “public perception issues”.

Parques Reunidos and Merlin Entertainments were reportedly among a number of companies considering purchasing SeaWorld in late 2017.

Correction – This article originally implied that Brian Morrow had left SeaWorld Entertainment. It has been corrected to reflect that while he has announced his departure, he will still be working at the company for the next few weeks. Updated at 17:15, 05/03/2018.