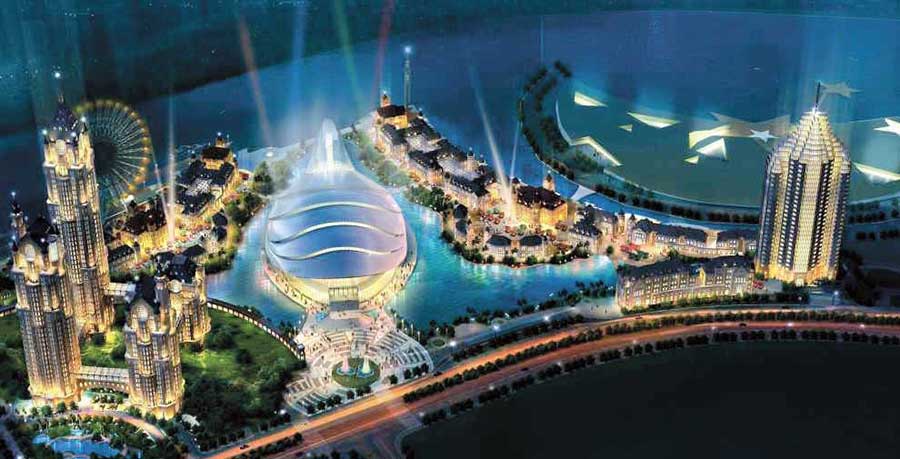 A gigantic polar-themed ocean park is set to open in the Lingang area of Pudong, the most south-easterly area of Shanghai.

The master plan for Lingang is to develop this port area into a new town showcasing science and technology, culture, finance, trade and tourism.

Alongside the Shanghai Polar Ocean World, a skiing park and a planetarium are planned as part of the huge revamp. Two new universities and other college campuses will make their homes here.  The aim, according to the Lingang management committee, is to attract 450,000 residents and 10 million tourists per year by 2020.

Shanghai Polar Ocean World will cover around 300,000 square metres. It will comprise four marine animal interactive programmes, three theatres and an additional 15 entertainment facilities.  The park’s aim is to showcase a broad range of Arctic and Antarctic wildlife.

Work has already started on WinterStar, near the polar park. The plan is for it to become one of the world’s largest indoor skiing resorts.

The Shanghai Planetarium is also under construction. It is scheduled to open in 2020, and will become the world’s largest planetarium.

The Sino-French Arts and Design Management School of the China Central Academy of Fine Arts, and the Sino-British International Low-carbon College will both open campuses in the area. Both institutions will start enrolment next month.  A new campus of the Shanghai University of Electric Power is also under construction.

There is even more construction under way in Lingang as office buildings, convention centres, hotels and shopping malls start going up.  A yacht training base is also planned.

Plans for the future include an 18.9-kilometre, medium-capacity traffic system.  Electric buses will run alongside car and bicycle sharing programmes.  The aim is to create a green and efficient public transport system.  Lingang is a 90-minute drive from People’s Square in the city centre of Shanghai.