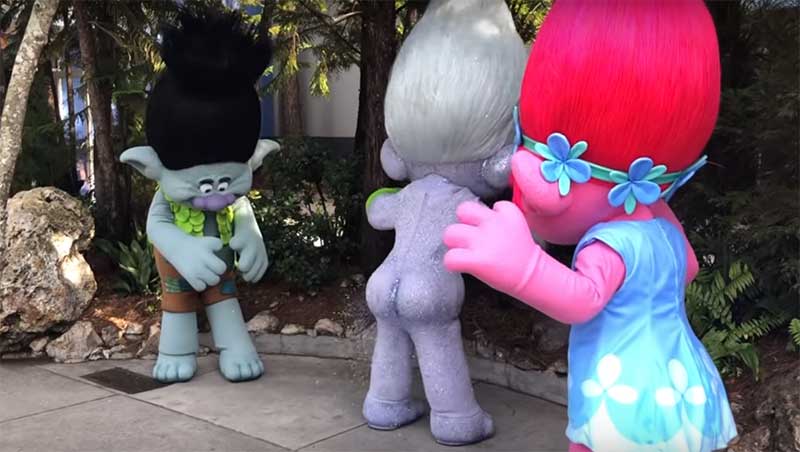 The daily meet and greet with the characters from Trolls usually features Poppy and Branch. Recently, a sparkly purple troll named Guy Diamond has also been added to the event.

Guy Diamond does a short dance, and then farts confetti.

The character has attracted lots of attention on Twitter, with viral Tweets joking about the character – including the suggestion that he should star in next year’s Superbowl Half Time Show:

And another user that was thankful to the character:

UK theme park Thorpe Park got in on the action:

Based on recent theme park industry trends, we’ve decided to reconfigure Stealth so that it now farts glitter with every launch ??✨

There were comparisons between different approaches to live appearance character development taken by Disney and Universal!

Disney: “we built a talking Mickey that cost years of R&D that we retired in five years”
Universal: “put a glitter fart thing in this mother fucker”

Other users raised concerns about the character:

I’m very uncomfortable with how sculpted his butt is

As well as the additional clean-up he requires:

Last year, Museums in the UK celebrated ‘Museum Meme Day’ by posting captioned pictures of their artefacts on Twitter.

And earlier this year, museums went viral on Twitter by sharing their best “duck pics”.