A blog post made on the Universal Orlando website has fueled speculation among fans of announcements set to be made in 2018.

The Universal Orlando blog post promised “you can expect to hear an announcement or two from us this year” on new rides, hotels and shows:

Some enthusiasts have attempted to decode the elements of the message.

Robert Niles, of Theme Park Insider, speculates that the new Harry Potter ride could be themed to the Forbidden Forest. Blooloop previously reported: “This ride is going to redefine the category and transport you to thrilling places, drawing you into even more exciting adventures within the wizarding world.”

The news of a projection mapping experience is new – but Theme Park Insider suggests this could be a version of a show that previously took place in Universal Hollywood, Nighttime Lights. 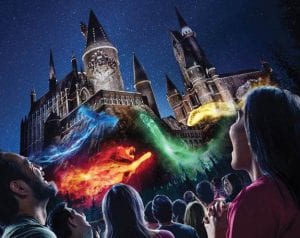 The Terminator 2 replacement is as yet unconfirmed by any official source, but Theme Park Insider reports that existing rumours of James Bond, Sing and the Secret Life of Pets can be ruled out by the news that it is a “Universal franchise.”

At the end of last year, Universal Orlando announced two new hotels offering budget accommodation for families. We could expect to see names and details of the hotels announced this year, says Theme Park Insider. But – they report – speculation is rife of a move into luxury development as well.

Finally, the Universal Orlando promises an announcement on “what’s next” for the park’s partnership with Nintendo. Super Nintendo World is already under construction at Universal Japan. Theme Park Insider reports that something similar is planned for the site of Woody Woodpecker KidZone.

While Universal has given just limited information about its plans for 2018, the rumour mills are already turning and speculation is everywhere.