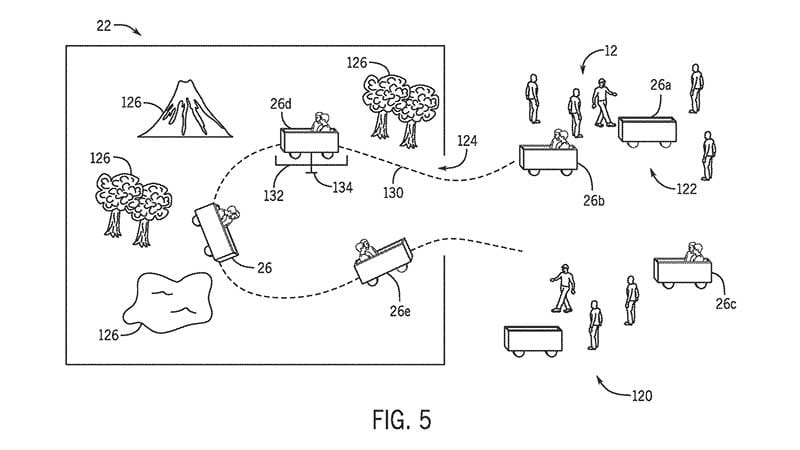 Universal has filed a patent for self-driving vehicles to collect guests and drive them around the park or resort.

In the patent, titled ‘Autonomous Transportation Techniques’, Universal City Studios LLC outlines what driverless vehicles could do in a small area.

The game-changing technology, if it sees the light of day, could transport guests to attractions, and carry their belongings around.

“Amusement parks or similar entertainment facilities may move people and goods in a variety of ways within a park environment that is closed to outside vehicle traffic. However, vehicle transportation within a park is complex.

“Pedestrian paths are often closed to motor vehicles. Park shuttles may operate on set paths within the park, but these may require guests to wait for the next shuttle. Further, guests often have overnight accommodations that are outside of park boundaries, which discourages back-and-forth trips to drop off unneeded items.”

Guests could go to a boarding point and activate a device, which would then activate a vehicle and send it to the boarding area. It’s possible that visitors could request the vehicles, featuring control panels with destinations, via mobile.

The application describes an autonomous vehicle that would track and meet guests at their location in advance, and adds that the vehicles could be themed to the park’s attractions.

The document also notes that the autonomous cars could be used to transport guests’ merchandise, and to take props or equipment to shows around the park.

In January, a patent filed by Universal City Studios LLC offered a new method for managing guest flow in walk-through virtual reality attractions like The Void.

Universal previously filed four patents pointing towards new systems and methods for integrating VR and AR into rides and experiences and the resort.

Recently The Las Vegas Convention and Visitors Authority (LVCVA) has announced its support for Elon Musk’s The Boring Company to build an underground tunnel system in the city, for use with autonomous electric vehicles at high speeds.