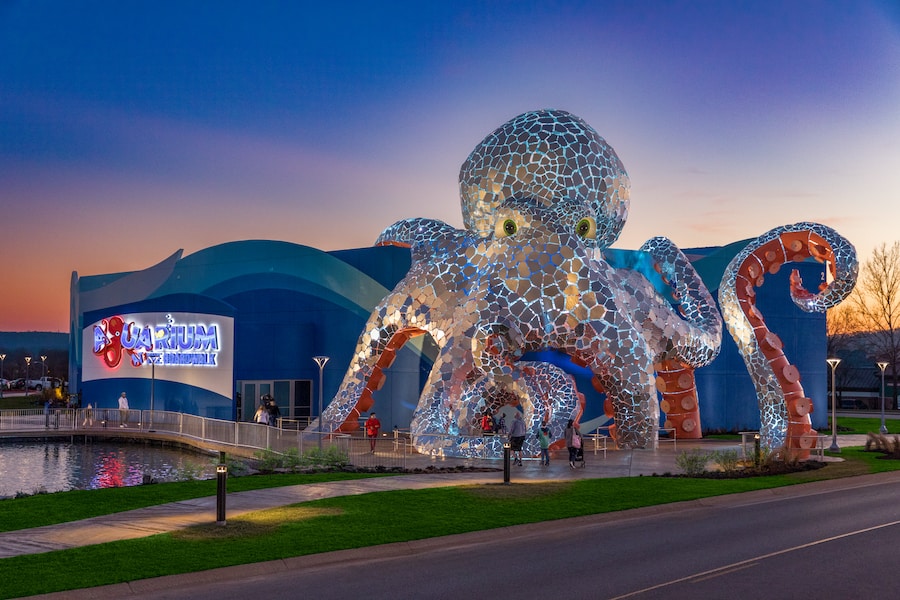 The new $55 million The Aquarium at the Boardwalk has opened on the site of the former Grand Palace Theatre in Branson Missouri.

The new carnival-style aquarium, designed by PGAV Destinations, showcases over 250 animal species homed in more than 400,000 gallons of saltwater. Eventually, there will be more than 10,000 individual sea animals on site. The attraction is firmly aimed at families with bright fun interiors and play areas alongside the aquarium exhibits.

A 55-foot tall octopus that lights up at night dominates the exterior of the main building. “It’s its own piece of art,” Steve Bitter, Director of Husbandry for the Aquarium at the Boardwalk told KY3. “It’s already slowing down traffic, people are really excited about it.”

Inside visitors follow a winding route through a boardwalk-style setting, with carousels and games set alongside tanks set in the curving walls.

Ten zones feature sharks, octopus, eels, stingrays, seahorses and lionfish, amongst others. A 4D movie theatre takes visitors on an immersive tour of the deep, while the 5D Submarine Adventure plunges to a bottom of the sea experience. The Jelly Infinity Room celebrates the wonder of moon jellyfish in a colour-shifting mirrored environment. Mermaid Palace is a themed area where stories of the deep are told by a ‘real’ mermaid.

A 24-foot high Kelp Forest climbing structure is just one of many play areas. There are several photo op stations, including pop-up bubbles within the tanks.

The museum boasts two touch pools. One contains cownose rays and bamboo sharks while the other features tide pool animals such as anemones, starfish and horseshoe crabs. “Touch Pools are one of the most popular features in all aquariums,” said Tej Sundher, a partner at Kuvera Partners in an interview with Ozarks Independent. “It’s been our pleasure to see the pure excitement when guests reach into those pools and connect with the animals.”

Work continues on the 13-acre site. The historic Grand Palace Theatre was demolished as part of the ground clearing work and the site remains behind boards. Plans for this area are yet to be announced.