AREA15 has officially opened in Las Vegas, with the experiential art and entertainment complex literally blowing the doors off and ‘unleashing the extraordinary’.

AREA15, an immersive playground in one vast and vibrant space, opened its first phase on September 17, with further experiences planned throughout fall.

Meow Wolf’s Omega Mart, which is set to debut in early 2021, will be “unlike anything visitors have seen before”, boasting an even richer storyline than Meow Wolf’s installation in Santa Fe, the House of Eternal Return.

We blew the doors off and unleashed the extraordinary. See you soon! 🔥🔥🔥

F&B outlets include ‘Emack & Bolios’, ‘The Beast Pop-up Food Experience’, and ‘Oddwood’, which boasts an ever-changing Japanese maple tree and a canopy with more than 5,000 LED lights.

‘Haley’s Comet’ is the first indoor, electric dual-track suspension ride in the US, while ‘Gallerie 360 Inside The Portal’ is an immersive audio and visual experience inside AREA15’s 360-degree projection mapped room.

‘Sanctuary by Ibuku Design Studio’ is a tranquil place to gather and rest, and ‘Shogyo Mujo by Bart Kresa Studio and Joshua Harker’ is an interactive giant skull covered in 3D projection mapping.

Visit the immersive playground of AREA15 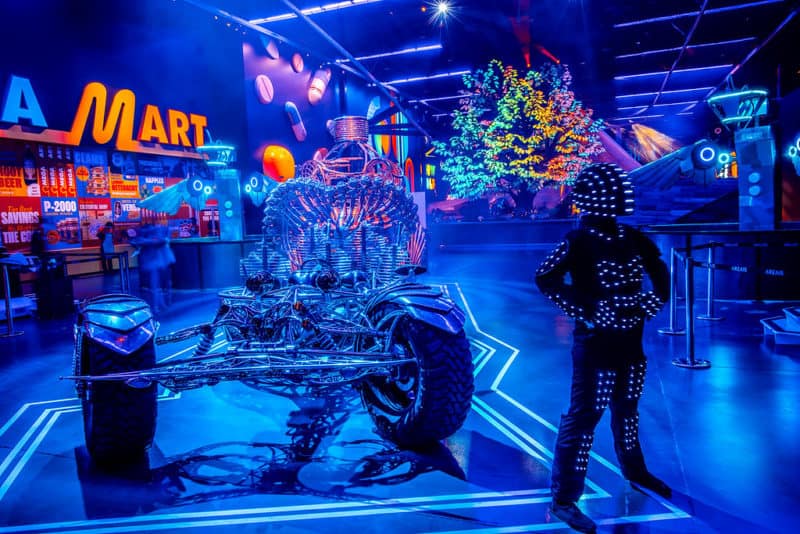 ‘Wink World: Portals to the Infinite’ comes from Chris Wink, co-founder of Blue Man Group. The art and entertainment project is his most ambitious since leaving the group in 2017.

And it is just that, the beginning. Over the next few months we will continue to unveil a wondrous mash-up of tenant experiences, events, art, and entertainment. But for now, you’re invited to wonder, wander, and gawk at everything that has come alive inside—and outside—of AREA15. Pre-register for available dates at the #LinkInBio

AREA15 CEO Winston Fisher will be speaking at the blooloop V-Expo, running from October 13 to 15. Don’t miss out – register here today.