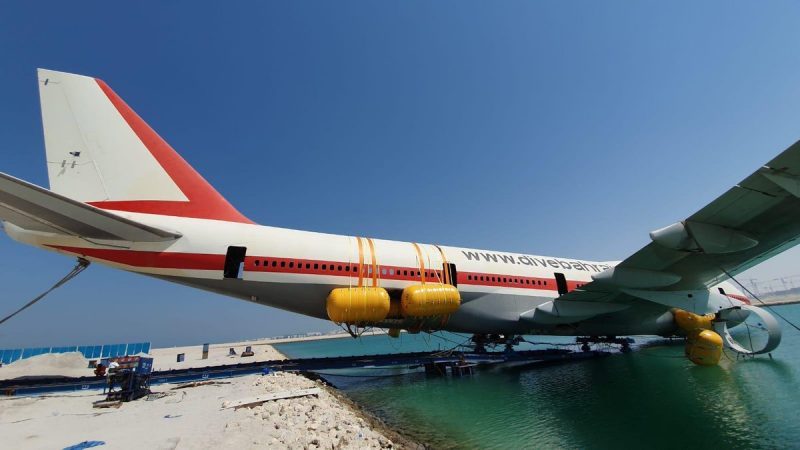 The operation to sink a 70-metre Boeing 747 – the largest aircraft ever to be submerged – is underway in Bahrain waters as part of an underwater theme park.

The first phase of Dive Bahrain saw divers and tugboats working to relocate the jet to its new home in the Arabian Gulf.

In preparation for the Boeing’s submersion, the Dive Bahrain team worked for eight months. “We could have just sunk it the way it was when it was transported here, but that’s not our intention,” said Hamad Al Mahmeed, project manager at Dive Bahrain (via The National).

And the countdown to the largest underwater theme park begins as our Boeing 747 sails to her new home! Are you as excited as we are?! #DiveBahrain #Dive #Bahrain #Scubadiving #SCE #BahrainOursYours #ecotourism #underwater #underwaterworld pic.twitter.com/LhSn9WcTjI

“We are in the market for a few ships big enough to be sunk,” added Mahmeed.

The aircraft is expected to rest at a depth of approximately 24 metres, positioned nose up to allow divers to access it at shallower depths.

“We are proud to launch this unique eco-friendly project,” he added.

The 100,000 sqm site will also include a replica of a traditional Bahraini pearl merchant’s house, artificial coral reefs and other sculptures fabricated from eco-friendly materials to encourage marine life.

Elsewhere, a retired KLM airliner made a five-day journey in Amsterdam to its final destination, where it will become a 5D aviation experience called the Corendon Boeing 747.