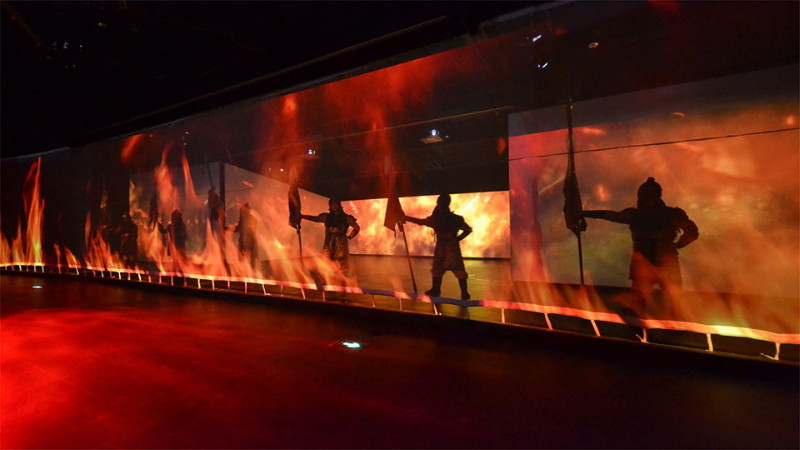 The latest visitor attraction at the Hua Qing Chi hot springs resort in Xi’an, China, ‘The Song Of Unending Sorrow’ is a brilliant new fusion of traditional storytelling, song and musicianship with the very latest in audiovisual technology.

Based on a poem written by Bai Juyi in the early ninth century, the show uses more than 30 licences of Dataton’s WATCHOUT image-manipulation and show-control software, driving over fifty multiple high-power projectors, holographic screens, special effects and pre-recorded audio.

These are synchronised with live actors, musicians and custom-made scenery to provide an unforgettable visitor experience inside a four-level ‘digital theatre’ built specifically for the project, adjacent to the site of historic Hua Qing Palace.

“Bai Juyi’s epic poem tells the story of the Tang Dynasty emperor Xuan Zong and his ill-fated love for a female consort, Yang Guifei, ” explains Kenneth Cheung, Managing Director of Audio Visual Technique, Dataton’s Premium Partner for Hong Kong and China, which supplied and installed the show-control elements of the system and who was on hand to offer technical back up, advice and support.

“Working in partnership with Australia’s Spinifex Group, which created the visual content, and An Heng Group, which provided the projection systems, we were tasked with delivering a multimedia production that would bring a fresh

dimension to a story that has been a part of Chinese culture for centuries.

“Using WATCHOUT enabled not just the creation of an automated AV show using multiple projection on an impressively large scale, but the creation of cues so that pre-recorded sound and other effects provide a rhythmic backdrop to the live actors and musicians who anchor the show to the traditions of the Tang Dynasty, literally bringing it to life.

“The result is a production full of atmosphere, emotion, drama and impact. Nobody who sees it can fail to be moved by it.”

Fredrik Svahnberg, Marketing Director, Dataton, adds: “Fresh from their triumph in creating the wonderful ‘Beijing Gets Moving’ exhibition last year, AVT and An Heng Group have again joined forces to show how new technology can highlight the power, intelligence and beauty of traditional Chinese culture.

“We at Dataton continue to be amazed by the creativity shown by our partners and it has been a privilege to see the image-blending, geometry-correction and other features of WATCHOUT being used to such dramatic effect at Hua Qing Chi.”