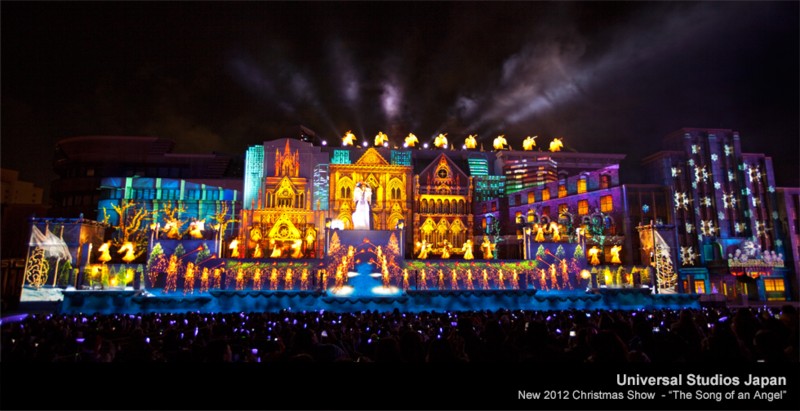 The system uses Dataton WATCHOUT™ multi-image display and presentation software to manage images in a complex and stunning production that combines performances from a 60-strong cast of actors and opera singers with lighting and special effects, on a building façade and stage measuring 250 ft wide and 70 ft tall.

“Christmas time is a family time, we’ve been brought in to create stunning visuals that immerse and transport viewers on a Christmas journey, ” explains Bart Kresa, Projection Designer at BARTKRESA Design. “In the design process, we created the sketches, paintings, 3D designs and animations managed using WATCHOUT. We produced the whole thing working with the Universal Studios Japan Show Director on creative elements and the Universal Studios Japan Producer on technical requirements.”

Twelve playback and four production WATCHOUT servers managed the content which was displayed with 31 projectors including the Christie Roadster S+20K and Christie Roadster HD18K 1080 HD DLP® models supplied by Corporate Image Associates, Inc, Images are projected onto a stage and the main building façade, creating a magnificent backdrop for the show.

“WATCHOUT works in sync with the show using a time code that syncs lighting, sound, projection and smoke machines. We use masking, perspective control and have done some layering of animations such as snow over background animations.”

Fredrik Svahnberg, Marketing Director at Dataton says: “Once again, the skill, creativity and expertise of Bart Kresa is teamed with WATCHOUT to create a dramatic, celestial, show which I’m proud to see has wowed audiences at Universal Studios Japan from both Japan and abroad.”