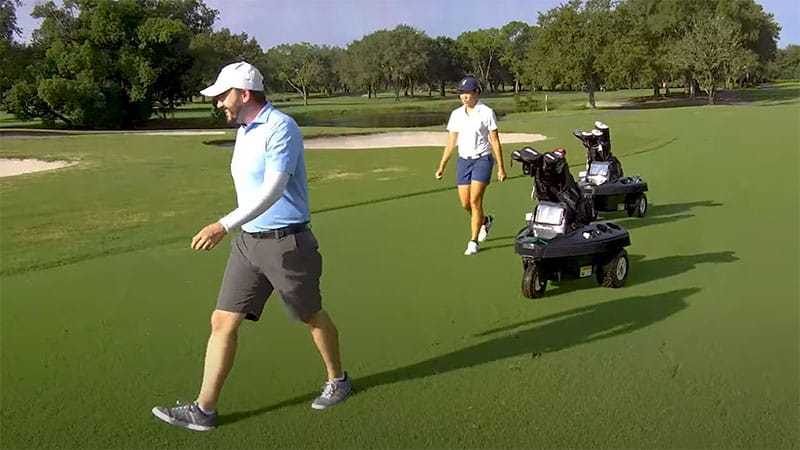 Robotics seem set to usher out the era of the traditional human golf caddy. Disney’s robo-carts have been designed by Club Car and hold the player’s clubs alongside a drinks cooler, cup holder, sand bottle and a USB port for charging devices during a game. The colour GPS screen on the front of the cart gives full yardage information.

Golfers clip a small transmitter to their belts and the autonomous cart will then follow a few paces behind them around the course. Maximum speed is around seven miles per hour and the moment the golfer stops, the cart also stops. The GPS trackers prevent the carts from driving into sand traps, trees, water, or other obstacles (including other golfers). An audible signal is given when the signal is lost and the cart stops until the signal is re-established.

The cart weighs 95 pounds and can cover 36 holes per charge.

Club Car has been building golf cars for nearly 60 years. Its Tempo™ Walk cart is the latest design, aimed at golfers who want to enjoy walking the golf course without having to pull a hardcart or employ a human caddy.

“When golfers don’t have to worry about pushing and pulling a handcart or carrying their clubs, they can focus on everything that first attracted them to the game,” says Club Car. “Tempo Walk uses technology to bring back the simplicity of the game in an exciting, revenue-generating way. It’s a smart way to build new relationships with golfers, improve the pace of play, and generate excitement across the course.”

At the Disney courses it costs an additional $10 to rent a Robo-Cart. A standard push cart costs $7 per nine-hole round.

Club Car isn’t the only manufacturer rolling out smart caddies. The CaddyTrek cart also allows golfers to walk hands-free. This cart uses a combination of Ultrasound and RF signal technology to calculate speed, distance and angle to the golfer. It has two tracking modes – either following the player or gliding ahead.

Disney has a long history of robotic development for theme parks. The company is experimenting with a range of uses for robots, from soft-body robot characters, animatronic acrobat robots and stuntronics, through to robots using AI to chat to customers, employing the emotions and facial cues we expect from a human interface.