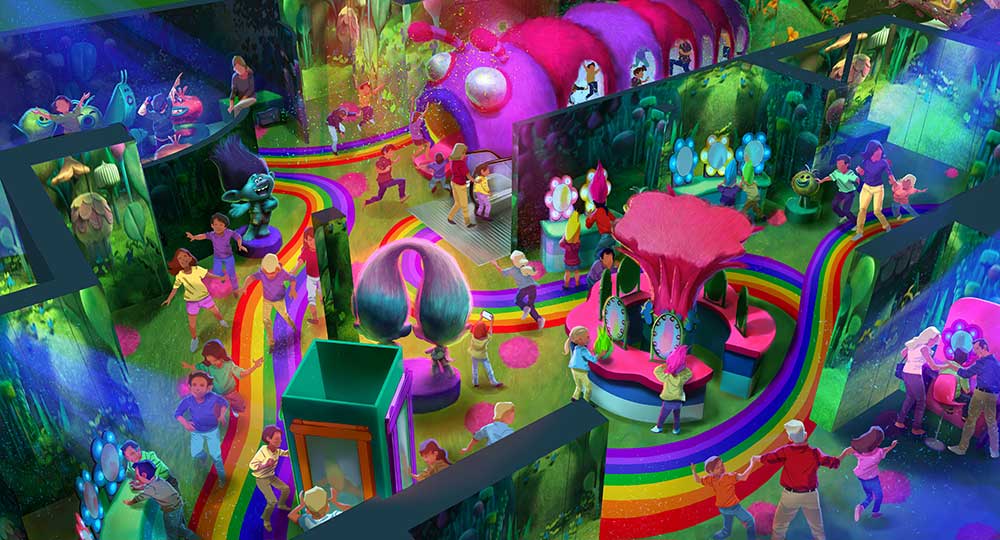 DreamWorks Trolls The Experience opens this November. The 12,000 square foot immersive experience is set to open in New York City – and social media sharing is touted as a key part of its appeal.

Trolls The Experience brings to life the colourful musical world of DreamWorks’ Trolls. It opens on November 15th in the heart of New York, between Broadway and 7th Avenue.

The experience offers guests a brand new 12,000-square-foot immersive adventure through vibrant areas packed with interactive, multi-sensory and musical experiences. “Creating shareable social media memories” is touted as a major part of the attraction’s appeal with guests being promised they will be “playing and snapping picture-perfect moments.”

Guests take part in an interactive journey to Poppy’s Best Day Ever Celebration. They get to enjoy the glittery lifestyle of the Trolls as they sing, dance, hug and generally celebrate. Their interactive journey is guided by a rainbow path and the experience includes a 3D dance party with resident mash-up maestro DJ Suki spinning the beat. Guests also get to join in a sing-a-long with Poppy and her Troll Village friends.

The ticket price not only covers entrance but also Trolls collectables, makeover accessories, temporary tattoos and 3D glasses. Guests receive a keepsake starter scrapbook in Bergen Town as they leave the experience which includes scrapbook pages and a complimentary printed photo from their own Best Day Ever. They can end their visit by buying souvenirs in the shop or sweets and treats from the Cupcakes & Rainbows café.

Hair we go! Tickets are now on sale for DreamWorks Trolls The Experience, the coolest, most colorful, interactive experience in NYC! Learn more: https://t.co/n9fbBQ3fOt pic.twitter.com/WROBKCtE7G

The live, interactive LBE is the first partnership of its kind between Universal Brand Development and Feld Entertainment. The experience has been inspired by the DreamWorks Trolls movie, which premiered in cinemas in 2016, opening at number one in 28 international markets.

A sequel is set for release in 2020. Named Trolls World Tour it will continue where the first film left off, and will feature returning cast members, including Anna Kendrick as Poppy and Justin Timberlake as Branch. New characters will be voiced by Sam Rockwell, Chance the Rapper, and Jamie Dornan.

Meanwhile Poppy and Branch are featured in a new attraction at Universal Studios Hollywood.