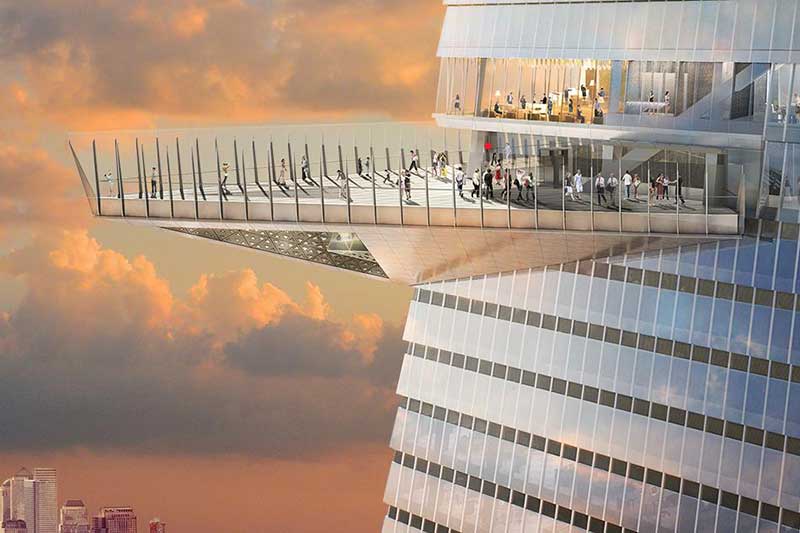 Edge, the highest outdoor observation deck in the Western Hemisphere, is opening in New York.

The upcoming 30 Hudson Yards observation deck is set to open in 2020, and is the highest public balcony in New York, and the fifth highest in the world.

It stands at more than 1,100 feet and features a glass floor and bird’s-eye views of the city.

“Edge invites visitors to walk out into the sky and embrace unobstructed, panoramic views of New York City like never before,” said Jason Horkin, executive director of Hudson Yards Experiences, in a press release.

“The name reflects both the unique structural design, which pierces the sky when observed from below, and the exhilarating feeling of being on the brink of something exceptional – exactly where you are on edge.”

A 60-second elevator ride takes guests to the 7,500-square-foot outdoor viewing area, which extends 65 feet from the 100th floor of the new 30 Hudson Yards tower.

The complex will include more than 100 shops and restaurants, a public square and gardens, as well as a cultural and performing arts venue called The Shed.

One of eight experiences on offer at the pop-up attraction is Jurassic Flight, featuring the BirdlyVR platform from D3D Cinema and Somniacs.

A launch date for Edge hasn’t been announced yet, but group bookings are open for the first quarter of 2020.