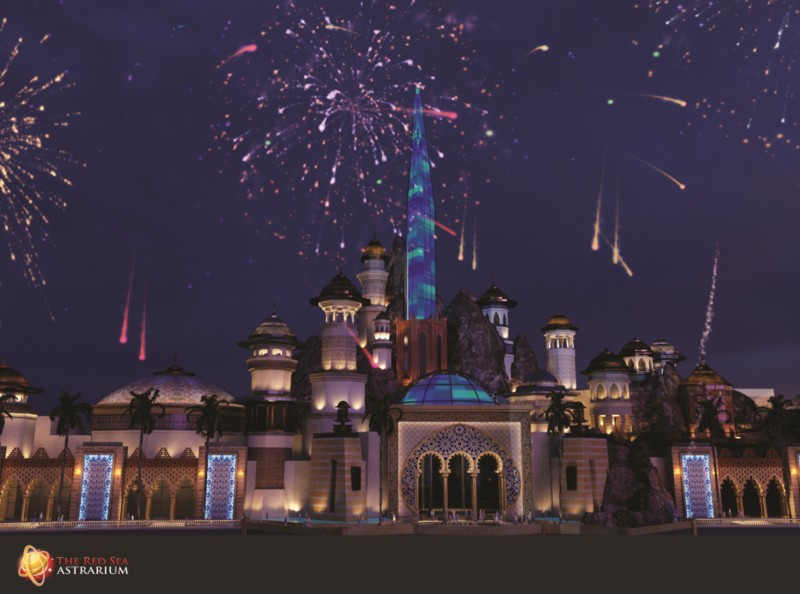 Design details revealed for The Red Sea Astrarium, a spectacular leisure destination that will create more than 4, 000 jobs for the local community and become home to state-of-the-art entertainment attractions of global distinction.

The Chief Commissioner of the Aqaba Special Economic Zone Authority (ASEZA), Dr. Kamel Mahadin, has announced that groundbreaking for the first themed tourist destination in Jordan is ready.  At a ceremony, held under the patronage of the Prime Minister of Jordan, Dr. Abdullah Ensour, the layout for land development, entertainment designs and architectural and engineering plans were revealed.

Details of the 1.0 million square meter themed entertainment resort were brought to life in an unconventional manner via a purpose-built cyclorama with 360-degree virtual reality projection, designed to give delegates attending the World Economic Forum in Jordan a taste of the Red Sea Astrarium experience.

The showcase highlighted how the Red Sea Astrarium (TRSA) will become a diverse leisure destination and afford a multi-cultural bridge that connects past, present and future, with the aim of bringing together people of all cultures, backgrounds and age groups.  The resort will also host the American Museum of Natural History’s Silk Road Exhibition throughout its Hijazi Gardens.

The ceremony demonstrated the home-grown and break-through technology behind two attractions that will catapult Jordan to the forefront for interactive experiences, including a global first for 4D inverted simulation that is different on every ride.

The announcement at the ground-breaking ceremony also underlined the project’s mandate for job creation, the contribution it will have towards tourism in Jordan and its use of clean energy sources.

Dr. Mahadin highlighted details of the resort that will make it the first of its kind in the world.  Speaking to delegates, he said: “A major goal in the design of The Red Sea Astrarium is to actively engage the local community through training with on-site hospitality academies, job creation, promoting the length of a tourist’s stay, and encouraging repeat visitation.  The entertainment resort will undeniably transform the Aqaba region and make it a high-end tourism hub for Jordan.  It will do so whilst telling stories from our regional culture and those of others, integrating alternative energy sources, and promoting the development of the entertainment industry in Jordan.”

Other details that were announced included the iconic ‘Astrarium’ building, four world-class 5-star hotels, ‘Old’ and ‘New’ waterfronts with expansive retail and dining facilities, and a theatre that will bring globally renowned shows to Aqaba.  Distributed within the ‘Astrarium’ building and the two waterfronts are 16 entertainment attractions and experiences, 15 of which are designed and built by Rubicon Group Holding (RGH), an international group founded and head-quartered in Amman, Jordan, while the 16th attraction is based on the CBS-owned property Star Trek, designed and built by Paramount Pictures.  The RGH-designed attractions include a 4D cinema, an indoor themed waterpark, as well as: