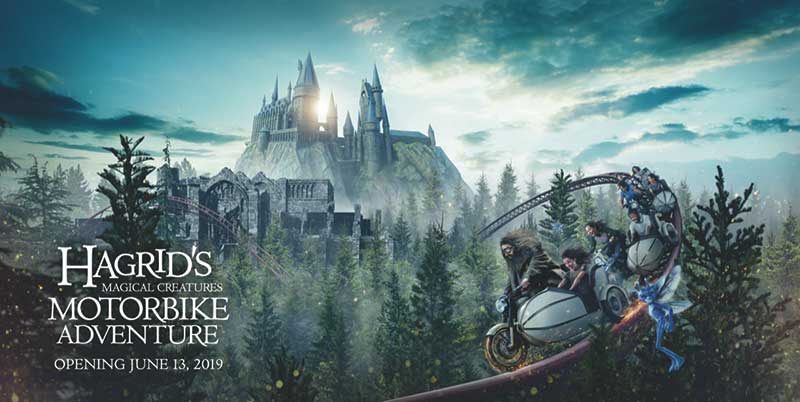 Hagrid’s Magical Creatures Motorbike Adventure will open at The Wizarding World of Harry Potter in Orlando on 13 June. The thrilling new coaster will be located at Hogsmeade at Universal’s Islands of Adventure.

The ride is said to be the “most highly themed, immersive coaster experience yet”.

Hogwart’s gamekeeper Hagrid will take guests on a journey to the Forbidden Forest to encounter the magical creatures that live there.

The Forbidden Forest will be a richly themed environment, populated with over 1200 real trees.

Guests join Hagrid’s Care of Magical Creatures class at their peril. On board enchanted flying motorbikes and sidecars things start to get our of control. The coaster careers around the forest at up to 50 mph, skimming obstacles and getting stuck in Devil’s Snare.

Alan Gilmore, Art Director for the Harry Potter films says, “This is unlike any ride vehicle you’ve ever been on before. It’s specially designed to make you feel the freedom of flight. Your experience will be different depending on if you’re in the motorbike or the sidecar.”

Creatures will include a Centaur, Cornish Pixies, Fluffy Hagrid’s three headed dog and a creature not yet seen on film.

Gilmore adds, “Hagrid is a huge fan favourite, so we knew we had to make it unlike any other experience in the whole world.

“It features the most amazing new environments, never seen before, highest levels of storytelling and the best use of technology throughout. I promise you, it will be the most highly themed, immersive coaster experience ever created.”