Hotopp is pleased to announce that it has recently worked on a project with the National Hockey League, providing solutions that allowed the NHL to begin Phase 4 of its Return to Play plan with the 2020 Stanley Cup Qualifiers in a way that is both safe and entertaining. The NHL approached Hotopp in mid-May with several challenging obstacles to solve.

The company needed to find a way to “fill” an arena without fans and maintain a high level of energy for both the players and those watching from home. Extra challenges were presented by the fact that the host cities were unknown until two weeks before load-in, and the project needed to be conducted in two different countries, during the global pandemic. One key challenge for sporting events as they return is how to provide enjoyable fan experience without losing the energy of a live, in-person event. The client, NHL Chief Content Officer Steve Mayer, had a vision for this new normal, and Hotopp worked closely with him to make this a reality.

Hotopp chose not to fill the empty arena with fake or virtual fans. Instead, it lit the arena and treated it with scenery for a natural and spacious feel that enhanced the environment.

The first ten rows of seating were covered with a graphic wrap with a light colour that meant the puck stood out against the background. In addition, the company added layers of Semi-Transparent screens, lighting towers, and built a central stage as an iconic backdrop for play. Teams and fans could provide content to bring these screens to life between play, giving them a new way to interact. The lighting design meant that many new, innovative looks were possible.

Working across two locations during COVID-19

The 24 teams are split into two hub cities – one in Toronto and the other in Edmonton – meaning that the scope of the project included designing for two separate locations, working to make them as similar as possible for the home viewer despite many differences in layout.

Each team had different challenges to work with, whether it was a lack of venue drawing information and rigging points in Toronto or the relative remoteness of Edmonton. 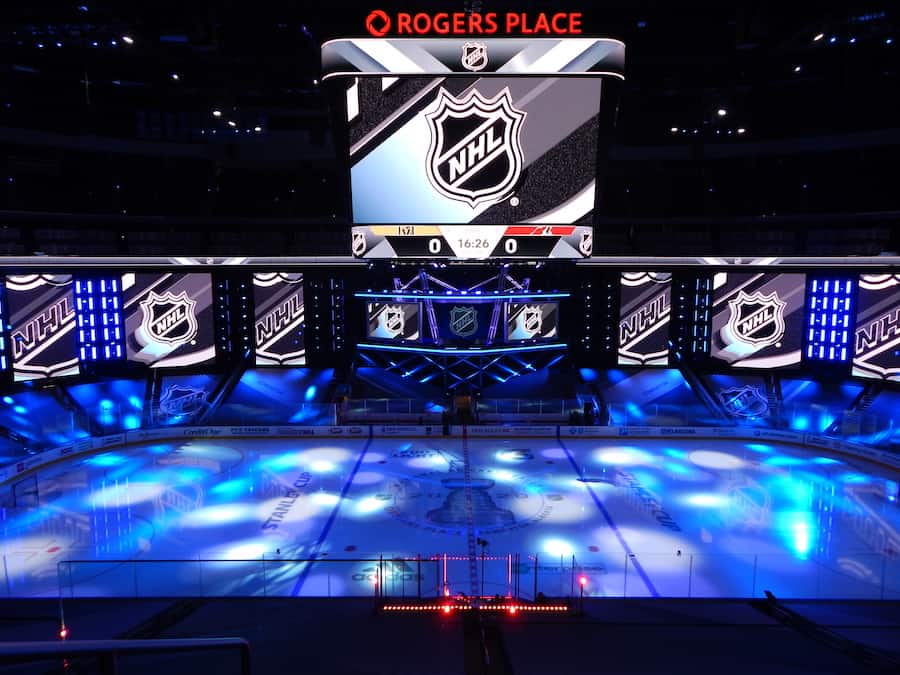 Plus, after working remotely for the design stages, the teams needed to be on the ground for the final stages, meaning that they needed to follow strict health and safety procedures to keep themselves and those around them safe.

Delivering the project safely and on time

“We have proven that with the right guidelines in place, production during Covid-19 is entirely possible,” said a spokesperson for the company. “The bubble is no joke. Leading up to departure everyone was tested three times. Once inside the bubble, we are tested daily and expected to follow strict protocols to keep ourselves and everyone else as safe as possible. Masks and social distancing are required, and a hand sanitizer is always within reach.” “We are not able to leave the clearly defined areas of the bubble without risking not being allowed re-entry. It took focus on behalf of everyone to stay in the game and get the job done.”

“With the landscape of public health shifting daily, the National Hockey League did not confirm their host cities until 2 weeks before we planned to load in. We quickly partnered with vendors who were just as excited as we were to help the NHL Return to Play in a way that was historic and groundbreaking.

“No one had ever attempted to rig 30’ tall LED screens and a giant stage in the seating sections of either arena; we were told more than once that it could not be done.”

Hotopp has over 30 years of experience in branded environments, attractions, live and stage events, studio television, and brand and immersive experiences.