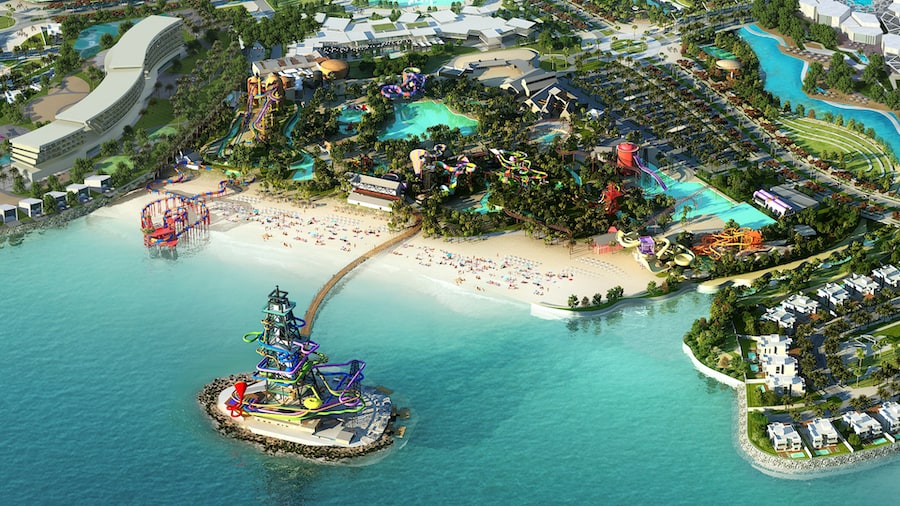 Interlink, a leading water ride designer and manufacturer, has signed a contract with Qetaifan Projects to design, manufacture and install a SuperFlume ride for Qetaifan Island North.

Interlink is pleased to announce that it will be providing its SuperFlume to the new waterpark project on Qetaifan Island North, where it will be the first ride of this type in Qatar.

When the new ride opens, guests will climb aboard on one of the 20-seater themed boats, which will take them on a journey through the history of oil in the area over the previous century, going through exciting lifts and drops and different themed zones.

The ride finishes with a dramatic splash down a 16-metre high chute, after rising up the cracking tower through a vertical lift, accompanied by special effects.

John Davies, Interlink’s Commercial Director says: “We are delighted to be involved with such a prestigious project like Qetaifan Island North’s Waterpark. This unique one of a kind SuperFlume ride is set to become something really spectacular and will surely prove to be a truly exciting family ride for visitors to the Waterpark”.

The Head of Business Development at Qetaifan Projects, H.E Sheikh Nasser bin Abdulaziz Al-Thani, adds: “We are thrilled to be adding the SuperFlume ride to Qetaifan Island North’s waterpark, and we are confident it would work to attract the largest number of tourists of different age groups, especially those interested in exploring different cultures.

“The safety and security standards come on top of our interest in designing and constructing the waterpark, and accordingly we have chosen the best companies in this field to work on implementing and managing the waterpark.”

Qetaifan Island North’s waterpark is home to 36 waterslides and attractions and spans 137,000 square metres. Guests can also enjoy six beaches and a 350-room hotel, as well as a beach club and shopping area.

Interlink has been in the business of designing, manufacturing and supplying water rides for over 35 years, and has a large portfolio including log flumes, SuperFlumes, mini flumes, rapid rivers, water battles, spin boats, big chutes and enchanted rivers. In addition, it also provides people-mover systems such as monorails and dark rides, as well as other attractions like Panoramic Towers.

Earlier this year, the company celebrated the design of its immersive SuperFlume by taking a look back at the evolution of the log flume ride.