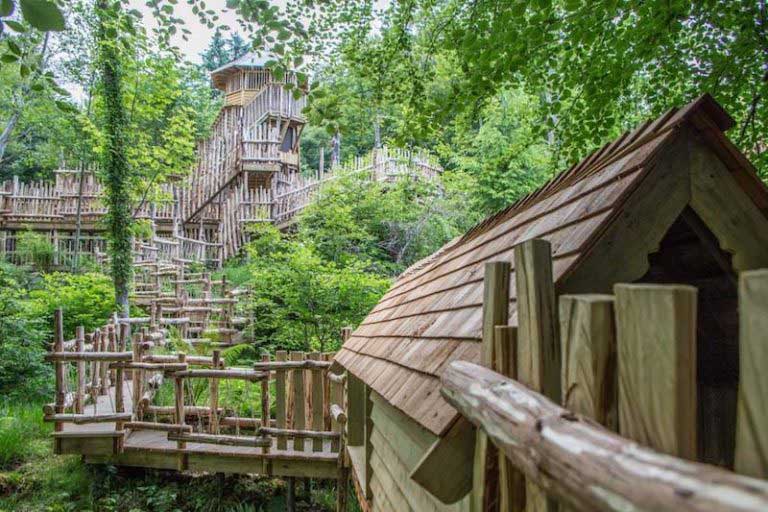 CAPCO finishes Phase One of the play attraction at the National Trust for Scotland’s iconic Isle of Arran property.

CAPCO says the design and build was a huge challenge.  “The land itself was often wet, certainly rugged and there was a deep burn running through what was to become the heart of the adventure play site,” says the company.  “Add in the logistics of it being on The Isle of Arran, only accessible on a Caledonian MacBrayne ferry.”

The project had to be extremely carefully planned and designed, requiring exquisite sensitivity to the historic site, its flora, fauna and wildlife. This was imperative in order to gain approval from both the NTS and the North Ayrshire planners.

The design brief was minimal.  CAPCO was instructed it should employ a gentle theme that echoed and hinted at famous Scottish animals and the icons of the NTS – red squirrels (Arran is famous for its colony of the rare squirrels), otters, red deer and the majestic golden eagle.

CAPCO designed five separate areas of play within the attraction. Each was inspired by a particular Scottish animal.  Squirrel Play combines an iconic tower with a maze of spiral net climbs, twisting staircases and slides.  It mimics the way squirrels chase up and down trees. Otter Play invites both children and parents to scramble and climb on structures close to the river bank.  A bottomless glass crawl tunnel allows a challenging crossing of the river.

CAPCO says that, “After the commercial success of the adventure play at NTS Culzean, it became a far simpler decision for the NTS to give us the go ahead.”

The build itself took just fourteen weeks.  A CAPCO team of up to eight were on site at any one time, including local recruits.

“It’s now looking great and giving thousands of children and parents some amazing adventurous outdoor fun, running and playing together in a stunning Scottish location,” says the play company.