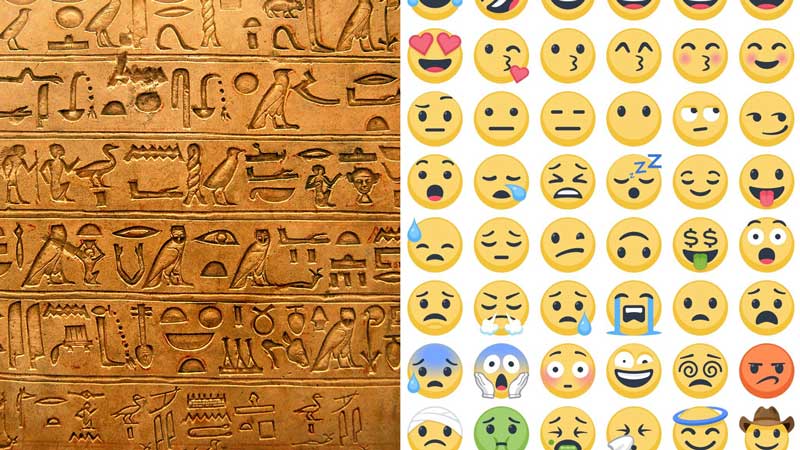 The Israel Museum in Jerusalem is using the emoji to help communicate the history of picture writing from hieroglyphs to the modern-day in the Emoglyphs exhibition.

Jerusalem’s Israel Museum is using a thoroughly modern medium to shed some light on its collection of ancient Egyptian hieroglyphics in its latest exhibition, Emoglyphs. The installation explores the tradition of picture writing and how it has evolved from ancient to modern times.

The hieroglyphic script dates back to ancient Egypt and was first used around 5,000 years ago. It uses hundreds of pictures to communicate meaning. While this tradition was gradually replaced with the alphabet that we know today, the exhibition draws parallels between this and a 21st Century version of picture-writing – the emoji.

The evolution of picture-writing

This new exhibition highlights a collection of artefacts from ancient Egypt, juxtaposed with contemporary emojis, showing how the tradition of writing through pictures has evolved throughout the ages.

Through films and multimedia stations, the exhibition illustrates how pictures and images can be used to communicate complex meanings and can act as a sophisticated way of relaying messages.

As well as many objects from the Israel Museum’s collection, some of which are on public display for the first time, Emoglyphs also presents many items on loan from a private collection in London.

The hieroglyphic script looks very different from the communication methods that we are used to. But the museum has tapped into a modern language that the digitally-savvy visitor of today is familiar with, in order to help today’s audiences connect with history.

Other museums around the world have also been using social media and modern forms of communication to attract a modern audience, from LACMA’s iconic use of Snapchat to The Museum of English Rural Life’s legendary twitter account.

Emoglyphs is curated by Shirly Ben-Dor Evian and can be found at the Israel Museum in Jerusalem until 12 October 2020, in the Davidson Temporary Exhibition Gallery, Archaeology Wing.