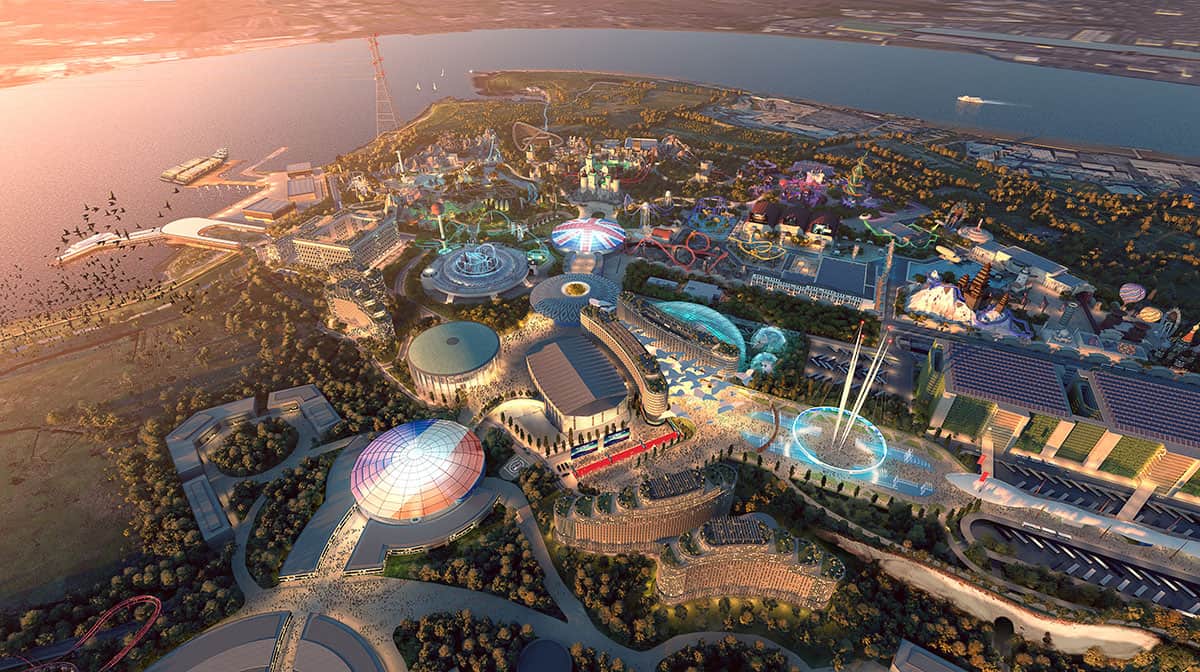 Set to be a unique and groundbreaking, world-class destination, the London Resort, one of the most ambitious projects in Europe, is submitting its planning application submission to the Government today.

The Government’s Planning Inspectorate agency then will have a period of 28 days, during which they will  write to the local authorities and, together, assess ‘adequacy’ on the consultation. They will then evaluate the application before accepting or rejecting the submission. If successful in securing development consent, construction on the London Resort could begin in 2022 with a plan to open in 2024.

The Development Consent Order (DCO) comprises over 25,000 pages of reports, assessments and analysis. It details exactly how this largely brownfield former industrial site on the Swanscombe Peninsula in Kent, just 17 minutes from central London by high-speed train, will be transformed into one of the world’s most exciting and immersive destinations.

The application confirms the scale and ambition of the team behind the, “world-class, sustainable, next generation entertainment resort”. The plans are to develop two theme park gates, a waterpark, a conference and convention centre and an e-Sports facility.  More than 3,500 hotel rooms will also be created. In addition, two ferry terminals – one each side of the River Thames – will be built, along with back-of-house facilities, a visitor centre and a new road from the A2.  The vast majority of the materials required to construct the resort will be delivered by river.

The London Resort will be a world-leading resort and theme park destination and as such, will mark a step-change in leisure and entertainment provision in the UK.  With two theme parks showcasing the world’s most immersive and advanced themed rides and attractions, e-Sports, a water park, entertainment and conference/convention venues, hotels, retail and dining, the London Resort, will be one of the world’s largest, immersive experience centres in the world. The first theme park ‘gate’ will open in 2024 and the second within five years (by 2029).

The theme park will have six themed lands.

These are The Studios (a modern-day warehouse district inspired by blockbuster movies), The Woods (an enchanted realm influenced by fables and fairytales), The Kingdom ( swords, sorcery, dragons and Arthurian legend), The Isles (giant creatures, mythical beasts and jaw-dropping architecture), The Jungle (ancient ruins of a long-lost Mesoamerican civilisation) and The Starport ( a sci-fi, 23rd-century landing zone).

Zooming in on the latest image released reveals more details about the themed lands and potential plans for roller coasters, rides, attractions and a castle. 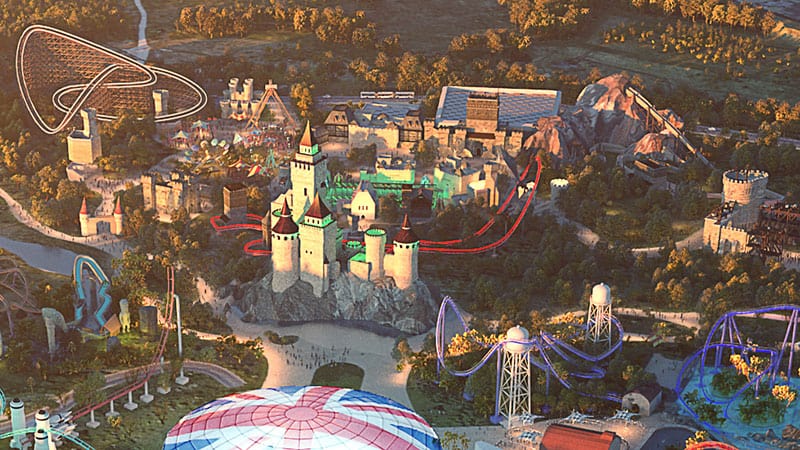 The London Resort: The Kingdom themed land including castle 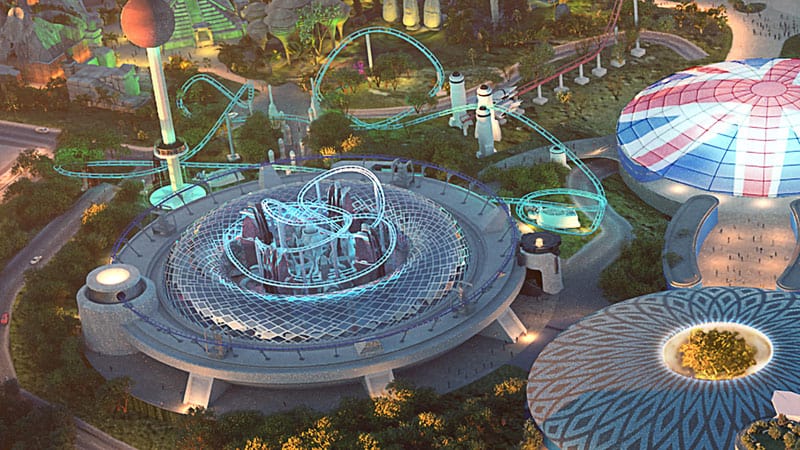 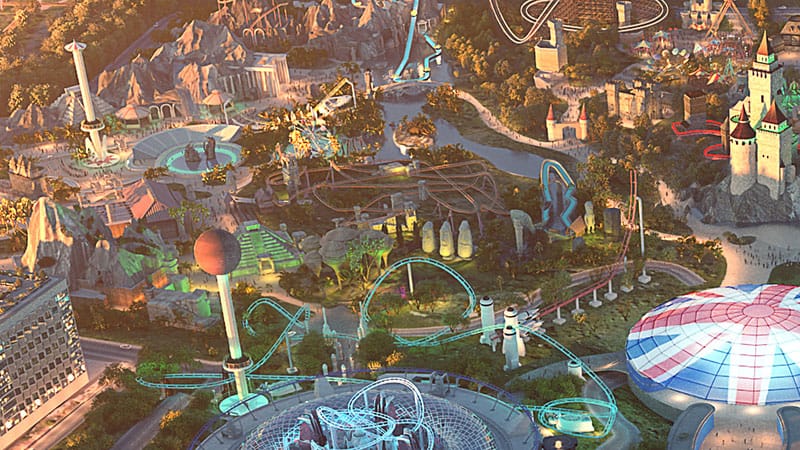 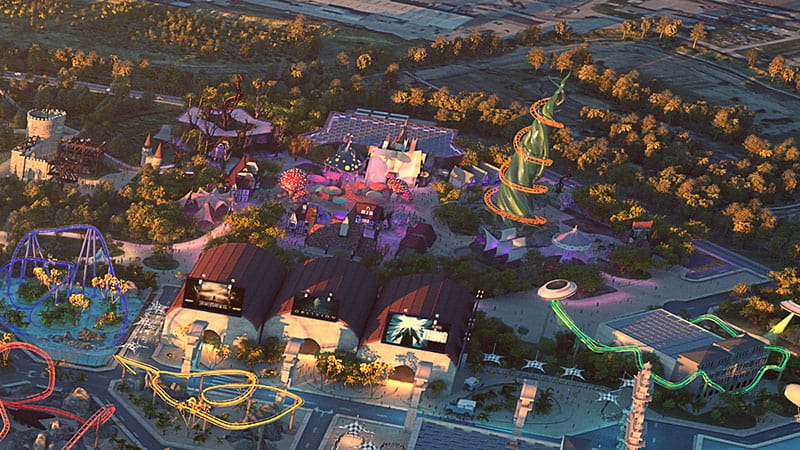 The London Resort’s impact on the economy

The London Resort will be one of the largest, single site employers in the UK.  It will therefore make a significant contribution to the UK economy.  Independent research, detailed in the application, highlights a number of key benefits:

With a global profile, the London Resort will attract visitors from all over the world. This will bring economic and community benefits for the local area that will reach far into Kent, Essex, London and the UK.  The impact of the development on tourism, business growth and job creation will be transformational.

The project will be the first European theme park destination to be built from scratch since Disneyland Paris in 1992.  The potential impact of the London Resort on the UK economy is illustrated by the success of Disneyland Paris. In the 25 years since it opened, the Disney park has added €68bn to the French economy. It has also benefitted the region in which it sited, Seine-et-Marne, to the tune of €22.4bn

Furthermore, Disneyland Paris made €13.7bn in purchases. 70% were made locally and 82% were made within France, adding knock-on benefits to local suppliers. Like Disneyland Paris, the London Resort is expected to be a catalyst for job creation and regeneration.

Sustainability and the environment

Importantly, the London Resort aims to be one of the most sustainable destinations in the world. It also plans to run an operationally carbon neutral theme park. The project will deliver a net biodiversity gain and will create a green network of amenity areas and parkland. These will include areas of environmental enhancement and wildlife habitat creation beside the River Thames.

PY Gerbeau will be speaking at greenloop, blooloop’s sustainability in visitor attractions online conference on 20 April 2021.

So much more than just a theme park

The project will harness the natural landscape and riverside location, seamlessly integrating them into the designs.  A large proportion of the peninsula landscape will remain undeveloped. It will also be enhanced, principally for wildlife and biodiversity benefits. It will include with quiet zones for visitors and the public to relax in natural surroundings.  The designs will also integrate local public rights of way and a green network, giving improved access to the river for both visitors and local communities.

In addition, an improved network of pedestrian and cycle routes is planned for the Swanscombe Peninsula. This will improve connectivity and access within existing neighbourhoods. It will also create linkages with the network of green spaces and the river.

Chief Executive PY Gerbeau, who joined the London Resort in the summer of 2019 said, “I arrived at this project eighteen months ago and it has been non-stop ever since.  We have revived, reviewed, and reprogrammed the entire venture.  This will be so much more than just a theme park.

“We have built excellent relationships with many stakeholders and are working closely with the elected local Council leaders. This has been an incredibly challenging journey and we look forward to working with the UK Government over the next twelve months.”

PY Gerbeau spoke exclusively at the blooloop V-Expo in October 2020, showing viewers a fly through of the theme park development.