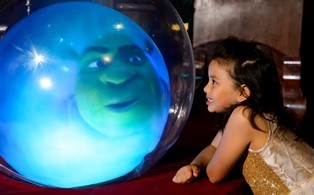 Merlin Entertainments and DreamWorks have teamed up to create a brand new Shrek experience on London’s South Bank.

Paul Moreton, Group Creative Director at Merlin Entertainments explains, “We’re telling a totally new story, in a totally new way and guests can really play their part by stepping into the action and taking a starring part. The ‘tour’ kicks off with a flight across London in a magical flying bus – a simulator ‘ride’ with some seriously amazing new DreamWorks animation. There’s plenty more ground breaking special effects throughout the attraction as the story unfolds and guests embark on a quest taking them through the Land of Far Far Away.”

Located in County Hall on London's South Bank next to Merlin’s SEA LIFE London Aquarium, the London Dungeon and the Coca Cola London Eye, Shrek's Adventure features other well-known DreamWorks characters including the Penguins of Madagascar and King Fu Panda, Po. The ride culminates in a fly-over by an eight metre wide model of Toothless the dragon from How To Train Your Dragon.

“There really is nothing like this anywhere else in the world and we cannot wait for people to come through the doors, ” adds Moreton.

Merlin has announced that it will be partnering DreamWorks to create at least 5 more attractions across the globe over the next nine years.