Walt Disney Parks and Resorts has appointed Michael Colglazier as president of its parks in Asia. The 28-year Disney veteran most recently spent five years as president of Disneyland Resort in Anaheim. 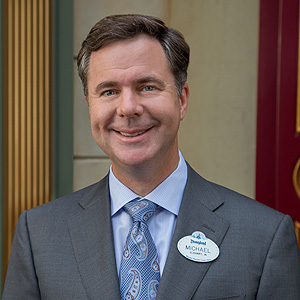 In his new role as president and managing director, Asia Pacific, Colglazier will be responsible for overseeing Disney’s parks and resorts operations throughout Asia, including Hong Kong Disneyland, Tokyo Disney Resort and Shanghai Disney Resort.

He will have a lot on his plate in his new role. In June 2018, Shanghai Disney Resort is due to open its Toy Story Land expansion. Meanwhile, construction is ongoing for the $1.4bn expansion to Hong Kong Disneyland, adding a Frozen themed land as well as attractions based on its Marvel IP.

It was also reported in November 2017 that Disney is planning a $2.7bn expansion to Tokyo Disney Resort in response to overcrowding and increasing competition.

Bill Ernest, who held the role since 2008, announced his retirement earlier this month after 24 years with the company.

Colglazier said: “It has been an incredible privilege to lead Walt Disney’s original park for the past five years and to drive his legacy of innovation, quality and storytelling alongside my fellow cast members.

“Being part of the Disneyland Resort community has been a wonderful source of joy for me and my family. I am tremendously excited to join our teams in Asia, where our growth opportunities are diverse and endless.”

Colglazier will be replaced as president of the Disneyland Resort at Anaheim by Josh D’Amaro, who has been with the company for 20 years. He was most recently a senior vice-president at Walt Disney World Resort in Florida, where he oversaw marketing strategy, sales and business development.

D’Amaro began his career with the company in 1998 as a senior business planner at the Disneyland Resort. Over the course of eight years at the park he held several leadership positions with increased responsibilities.

“I am incredibly excited to be returning to the place where I began my Disney career 20 years ago,” said D’Amaro.

“I look forward to working closely with my fellow cast members, overseeing the Disneyland Resort during such an exciting period of growth, and once again becoming a member of the Orange County community.”

“Michael and Josh bring a wealth of knowledge and experience to their new roles and share a passion for delivering extraordinary experiences for our guests. They are the right leaders to bring our ambitious expansion plans to life during this period of unprecedented growth,” he said.