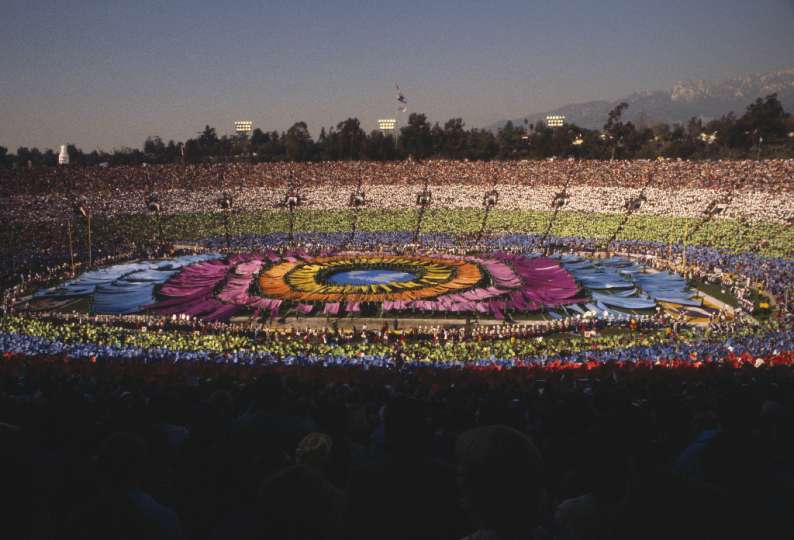 A world leader in show design and production, Miziker Entertainment, is celebrating the 40th anniversary of producing the first ever Super Bowl Halftime Spectacular.

Back in 1977, founder, Ron Miziker, was Director of Entertainment Show Development at Disney.

He was tasked with transforming what had been a couple of marching bands into an eye-popping spectacle.

It was a daytime event, so lighting effects were out.

“We went back to the client with a concept ‘Small World’. The idea was that we would get the 100,000 people attending the game at the Rose Bowl Stadium to participate,” recalls Miziker.

The idea was that the audience would hold up coloured cards on cue as a coordinated backdrop to around 2000 performers on the field including Mickey Mouse and the new Mouseketeers.

It was a hard sell. Wouldn’t everyone just go and grab a beer ? In the end, Miziker’s conviction that it would work won the day. Now, he just had to pull if off.

“As the seats were filled with fans, we made very carefully crafted announcements about how they would participate,” he recalls. “The NFL people were still doubtful.”

With only brief rehearsals during advertising breaks, the audience were slow to respond.  Eventually, says Miziker, about 60% took part. It was encouraging, but not enough. And, there was no time left to practise.

“The clock counted down the commercial. Hundreds of millions were watching. The cue was given: Go Show! And the entire stadium turned into colours. Right on cue!

“We made history that day.”

In 2015, Ron Miziker was honoured with the Themed Entertainment Association’s Buzz Price Award for a Lifetime of Distinguished Achievements.