The multi-year partnership between NASA and Peanuts Worldwide aims to inspire a passion for space exploration amongst new generations.

The partnership began in the 1960s when Charles M. Schulz, creator of the Peanuts cartoons, gave NASA permission to use Snoopy on their spaceflight safety materials.  The collaboration continued in 1968 with the introduction of the Silver Snoopy award, given to the agency’s employees and contractors who made outstanding achievements in the areas of safety and mission success in spaceflight.

The partnership ramped up when Apollo 10 was launched in 1969 with command module 106 named Charlie Brown.  Once in lunar orbit the module Snoopy was flown to within 14.5 kilometres of the moon’s surface. 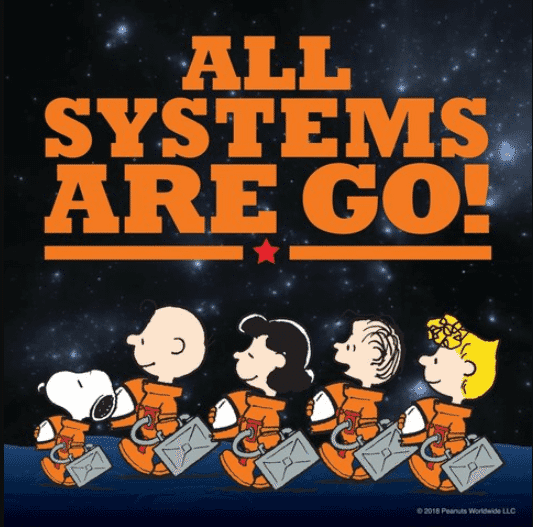 Now, fifty years on, the new agreement rekindles the partnership.  Both original and new content features Astronaut Snoopy.  It will form part of an in-school STEM-based curriculum covering the USA’s deep space explorations.  The material will provide creative, interactive ways to celebrate NASA’s historic moon missions and the anniversary of Apollo 10.

“My husband, Charles Schulz, fully embraced a collaboration with NASA for Snoopy and he was inspired to create a series of original comic strips detailing Snoopy’s fantastical journeys through space,” said Jeannie Schulz, Charles Schulz’s widow.  “Those strips remain among the most popular ones in circulation today.”

Craig Schulz is the youngest son of Charles Schulz and also producer of 21st Century Fox’s The Peanuts Movie.  “My father once told me that when NASA selected his characters, Charlie Brown and Snoopy, to be the names chosen for the modules for the Apollo 10 mission on its trip to the Moon, that it was the proudest moment in his career,” he said.  “He was honoured then, and I am honoured today as we renew the historic relationship between NASA and Peanuts.”

The countdown for the 50th Anniversary of Apollo 10 launches at San Diego Comic-Con this month.

A recent crowdfunding campaign from the Space Center Houston to restore NASA’s Apollo-era Mission Control more than doubled its fundraising goal. $507,000 was raised on Kickstarter, with the City of Webster providing matching funds of $400,000.