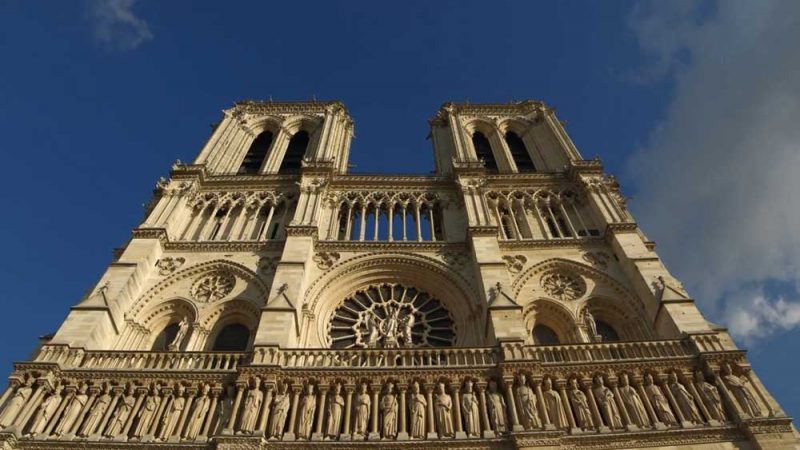 France’s Prime Minister has announced an international architects’ competition to rebuild Notre-Dame de Paris after its spire collapsed in a fire.

Prime Minister Edouard Philippe said that France will open the redesign of Notre-Dame to architects, following the blaze on Monday (April 15).

President Emmanuel Macron also stated in a TV address on Tuesday (April 16) that Notre-Dame would be rebuilt within five years and said that it should be rebuilt “even more beautifully”.

€800 million (£692 million) has already been pledged by business tycoons and companies to help rebuild the cathedral.

The spire was added during a 19th-century renovation of the 850-year-old cathedral. It was nearly 300 feet tall, with a structure made of wood and lead.

“The international competition will allow us to ask the question of whether we should even recreate the spire as it was conceived by [Eugène] Viollet-le-Duc,” the prime minister told reporters (via Reuters).

“Or if, as is often the case in the evolution of heritage, we should endow Notre-Dame with a new spire,” he continued. “This is obviously a huge challenge, a historic responsibility.”

Meanwhile, a copper statue of a cockerel – a symbol of France – that topped the landmark’s spire has been recovered from the rubble.

Elsewhere, Europa-Park’s 30-year-old Pirates of Batavia boat ride was destroyed in a huge fire at the German theme park in May 2018.

„There will come a time when you believe everything is finished. Yet that will be the beginning.“ Louis L'Amour // Can‘t wait for the future… #mackmagicmoments #storytelling #creativity #macksolutions #Pirates #batavia #robbemond pic.twitter.com/YXH8IXgp7e

Michael Mack recently revealed the design of the new ride in a first-look image posted to his Twitter account. Owned and operated by the Mack family, Europa-Park was founded in 1975.

In December, Chester Zoo released images of the animals relocated following a fire at the attraction.

These stories remind us of how destruction can pave the way for creation.