Orlando’s theme parks have been closed since March because of the coronavirus pandemic.

Phase one and phase two

These guidelines have been broken down into sectors. Following the current guidelines from the US President, the report introduces phase one and phase two, with different recommendations for these two phases. However, the report as it stands introduces no clear information on when the move from phase one to two will take place.

A common theme for all sectors is the introduction of PPE. Requiring staff to wear face masks, introducing staff temperature checks and having hand sanitiser at all locations is a mandate for every sector upon reopening. Any staff member who has a temperature should be sent home. Staff over 65 are also recommended to stay at home for their safety.

The guidelines are separated into guidelines and mandates, to recognise that not every recommendation is practical for all institutions.

The guidelines differentiate between small theme parks (like Icon) and large theme parks like Walt Disney World, Universal and SeaWorld.

One guideline for theme parks is marking six-foot spaces in ride queues to help with social distancing. It recommends that staff regularly wipe down surfaces.

Mandates for large theme parks reopening include wiping down railings and surfaces after every use. Touchless hand sanitiser stations should be introduced at ticketing entry points, turnstiles, and ride entrances and exits. 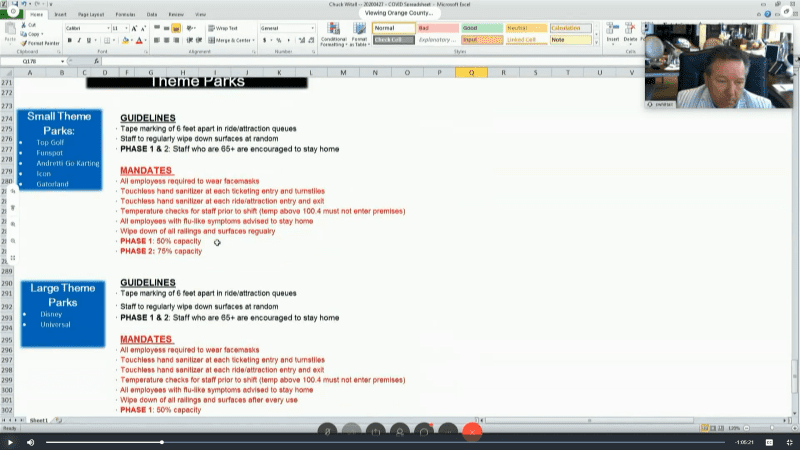 Under phase one, all theme parks should operate under 50% capacity and 75% capacity for phase two. There are currently no guidelines on social distancing while on rides, or whether parades or nighttime shows should go ahead.

The guidelines for indoor retail spaces are likely to be useful for Universal and Disney as they reopen their shops. Mandates for indoor shops include ensuring doors are automatic, propped open or staff open them to reduce visitors touching door handles.

Furthermore, sanitiser must be present at checkouts. An hourly wipe down of all surfaces is also recommended.

Theme parks are also going to have to follow the guidelines for restaurants within the parks. Disposable menus are recommended and hand sanitiser on tables is encouraged.

Restaurants are also mandated to put tables six feet apart. This will require theme parks to restructure their restaurants. 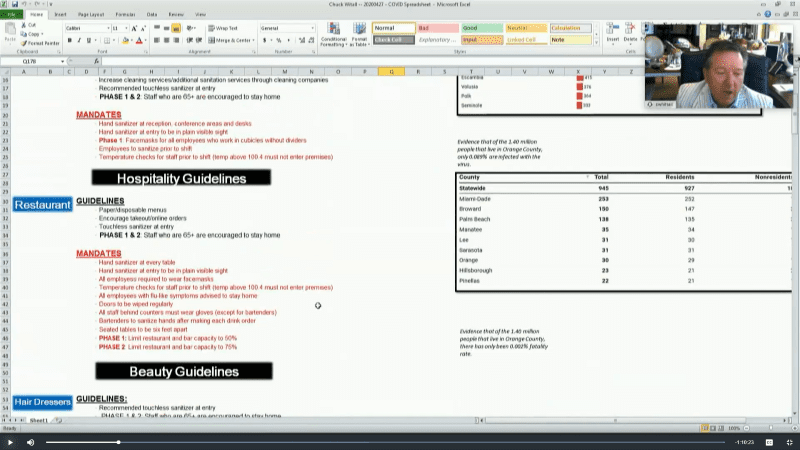 The task force’s guidelines on cinemas may point the way to theme parks reopening indoor shows, like Philharmagic at Walt Disney World. While in phase one, cinemas must leave two seats between each party, which is limited to four people. In phase two, group sizes can increase to six people with only one seat between each party. This may require extra staffing for theme parks to implement these rules.

Both Walt Disney World and Universal Orlando Resort have multiple hotels. The task force’s mandates for hotels say that front desks must have sneeze guards, and service items such as glasses and cups must be removed from rooms. Housekeeping should be limited and online check-in encouraged.

Pool furniture must be spaced out and no self-service food is allowed. Club Level services at both resorts, where complimentary food is served at a buffet, is unlikely to go-ahead under these guidelines. Walt Disney World’s President Josh D’Amaro and Universal Orlando Resort’s CEO John Sprouls are both members of this task force. However, neither company has released its official reopening procedures yet.

However, Sprouls has previously outlined ideas for reopening the resort safely. This includes staggering seating on rides, something that is not mentioned in the task force’s guidelines for theme parks.

Meanwhile, many theme parks in China are beginning to reopen. The Chimelong Resort is partially reopening on 30 April at 30% capacity and with certain indoor attractions remaining closed.

When will florida residents get to go? And what is the cost for one day ticket?

How about room service meals, full or snacks? Could be no contact and with s little more effort, could be the snack bar material also.

Why open theme parks but not malls