Parques Reunidos acquires Wet’n’Wild Sydney.  The world’s largest water park operator, now expands into Australia in the latest of a series of acquisitions.

Parques Reunidos is buying the park for 40 million Australian dollars (€25 million). There is also a variable compensation depending on the park’s revenue performance. The deal will be finalised within the next three months.

Wet’n’Wild Sydney is the most modern water park in Australia and the second most visited. It stretches over 24 hectares in Prospect, around 40 minutes outside central Sydney. Wet’n’Wild Sydney opened to the public in December 2013. It has 40 state-of-the-art attractions, designed to appeal to a wide variety of audiences.

The Australian acquisition is Parques Reunidos’ first move into southern hemisphere expansion. The bold step strengthens the company’s geographic diversification and will be a major factor in reducing revenue seasonality. Wet’n’Wild Sydney is likely to be just the first of other acquisitions in the area for Parques Reunidos who will be seeking to expand their portfolio of parks and indoor entertainment centres in the region.

Australia is seen as a highly appealing market for the company, with its expanding middle class and vibrant tourism in industry. Sydney is the obvious first step – with 5.6 million inhabitants, it’s the most populated city in Australia.

“This is a unique opportunity for Parques Reunidos to access the Australian market, grow in the region through further acquisitions and develop indoor entertainment centres,” said Fernando Eiroa, CEO of Parques Reunidos. “Our group’s global presence includes operations and projects across Europe, the US, Asia, the Middle East and now Australia”,

Parques Reunidos will draw on its wide experience at 22 water parks. The company expects to improve performance over the next few years by implementing best management practices at Wet’n’Wild Sydney. The park has plenty of potential for expansion and it’s likely that new theme areas and potentially a second gate will be brought in to widen the offer and maximise the value of the park.

Parques Reunidos is one of the world’s leading operators of leisure parks. The company owns 60 amusement parks, animal parks, water parks, FECs and other attractions. The company has a presence around the world in 14 countries in Europe, the Americas, the Middle East and Asia. Its attractions bring in around 20 million visitors per year.  Last month, the company posted revenue growth for the first half of the 2018 fiscal year and says its €32 million investment plans are on track.

Its expansion plans are continuing apace. In February of this year it announced the acquisition of the German theme park Belantis followed by a deal in May to develop five indoor FECs themed on FC Barcelona.  As part of its expansion into the Middle East, Parques Reunidos has taken over the operation of Dubai Safari in partnership with Meraas. 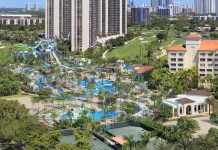