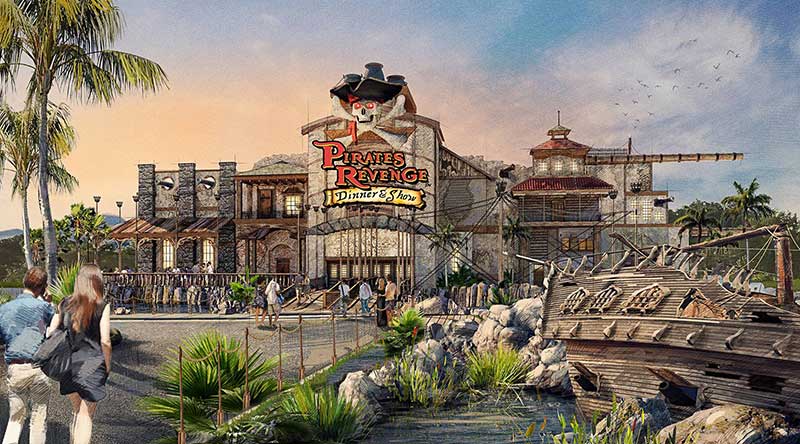 Plans have been announced for a $20 million renovation of the Smoky Mountain Opry Theater, to bring The Pirates Revenge Dinner and Show to Pigeon Forge.

The Fee/Hedrick Family Entertainment Group‘s production will debut in summer 2019.

Renovations to the theatre will include building a retractable water stage and moving ships, coupled with the latest bespoke technology to support the live action show.

Pending planning approval, the exterior of the theatre will also be updated with a pirate theme and special effects.

There are plans to relocate existing shows. The “Magic Beyond Belief” show starring Darren Romeo will move to its own stand-alone theater. It is also hoped to move “The Smoky Mountain Opry Show” to another location. Details to be confirmed at a later date.

David Fee, president and chief executive officer of Fee/Hedrick Family Entertainment Group, says, “We’ve enlisted the help of the best technological experts in the world to help with innovative thematic and production elements. Our writing team has worked on projects for Broadway shows as well as Disney and Universal productions. This show will be like no other in existence.”

Meanwhile Dolly Parton has announced a new pirate themed dinner experience, also for Pigeon Forge. This will be the second Pirates Voyage show. The first location opened in Myrtle Beach, South Carolina, nearly a decade ago.

The show will be at a 21,000 square foot arena next to The Island in Pigeon Forge, with pirate ships in a 15 ft deep indoor lagoon

On the website, Dolly says, “The show has been so successful in Myrtle Beach that we kept looking at Pigeon Forge and wondering why we didn’t already have a Pirates show there. We have the perfect location, in one of the hottest areas of Pigeon Forge, and the time is now for my pirates to stake claim to the Great Smoky Mountains!”

Dollywood announced the $37 million expansion, Wildwood Grove, in August, which is set to open in 2019.