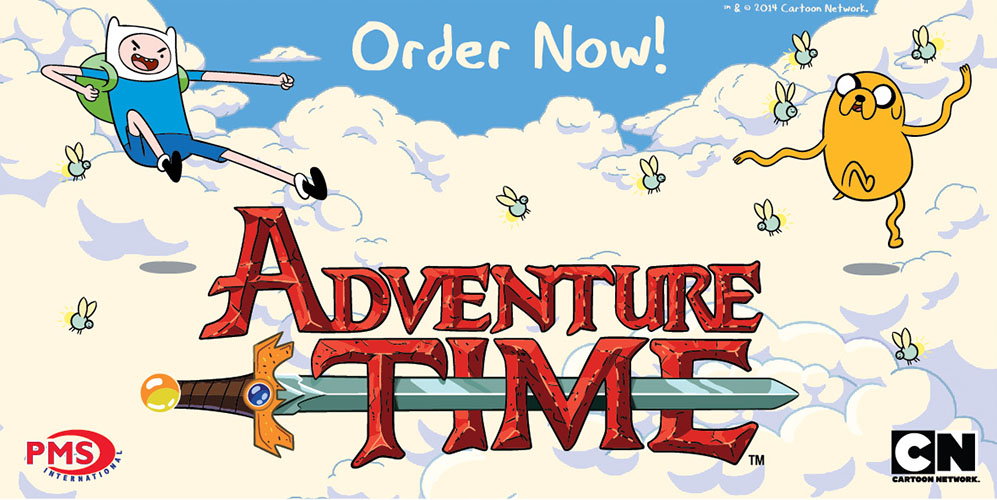 John Costi-Mouyia, Business Development Manager for PMS, explains, “The Pendleton Ward creation has become a huge hit in the U.S. since it’s first airing in April 2010 with around 2-3 million children viewing each of  the 11 minute episodes every week. Five series later numbering 155 episodes and series six just about to air in April 2014, we have seen a monumental growth in the phenomenon that is Adventure Time. The show is becoming ever more popular around many parts of the world including in particular the UK, Spain, France, Russia and the Middle East.”

PMS will be rolling out a comprehensive collection of Finn and Jake plush, gift, and inflatables accompanied by all of the supporting characters like the Ice King, Princess Bubblegum and Marceline the Vampire Queen. The first phase will comprise of a great range of soft toy prizes available in July ready for the main part of the season, with gift, novelty and inflatable items following on ready for the beginning of 2015.  PMS expect the property to do well over the coming years.

Costi-Mouyia, went on to say, “This is a refreshing, witty and very humorous show with solid positive messages about friendship, reliability and heroism told in a contemporary and edgy way. Children, teenagers and adults alike are all enjoying the Adventures of Jake and Finn and we believe this story will play well in the Amusement and Family Entertainment Centres.”

If you would like to know more about the availability of Adventure Time, please contact PMS International: