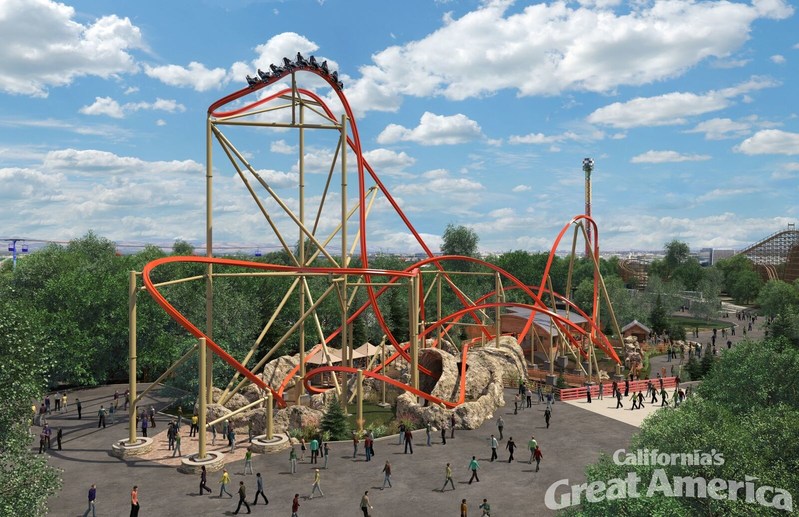 RailBlazer will feature a 90-degree drop alongside three inversions and dynamic rotations. It is set to become the first steel coaster of its kind on the West Coast that features a single rail track throughout.

The rider straddles the rail, which creates an extremely low centre of gravity.  This amplifies every move, enabling more dynamic turns and rotations than have been possible on a coaster before.

The eight-passenger single file train hugs the rail. It gives riders a clear view of both the ground and the air as they speed smoothly over the twisting track.

The coaster lifts riders up to 106 feet and then plunges them face down at a 90-degree angle. Travelling at 52 miles an hour along the 1,800 feet of track, they experience plenty of airtime and steeply banked turns.  The ride takes them through three inversions and twists them through a zero gravity roll.

“RailBlazer is a revolutionary roller coaster concept that will be an intense and exhilarating ride experience for our guests,” says Raul Rehnborg, vice president and general manager at California’s Great America. “In addition, it marks the company’s initial investment in the park following the City of Santa Clara’s approval this year of the new park master plan and it kicks off a multi-year transformation of California’s Great America into a world-class destination for everyone in the Bay Area and beyond.”

The design spirit of the ride aims to evoke an off-road adventure.  Immersive sensory theming conjures the outdoor beauty of the Bay Area and Central Coast landscape.

Once on board, riders climb a 45-degree ascent. They then dive into a ravine, encountering steeped embankments suggestive of an extreme four-wheeling trip.  Both the ride and the queue line include imposing physical elements with rocky surroundings and a natural waterway.  In addition, a trailhead marquee sign is designed to mark the start of the journey.

RailBlazer’s unique design also includes a silent rollback lift hill. This eliminates the traditional sounds of the train moving up the track.

The Holocaust Museum of Montana planned for Bozeman