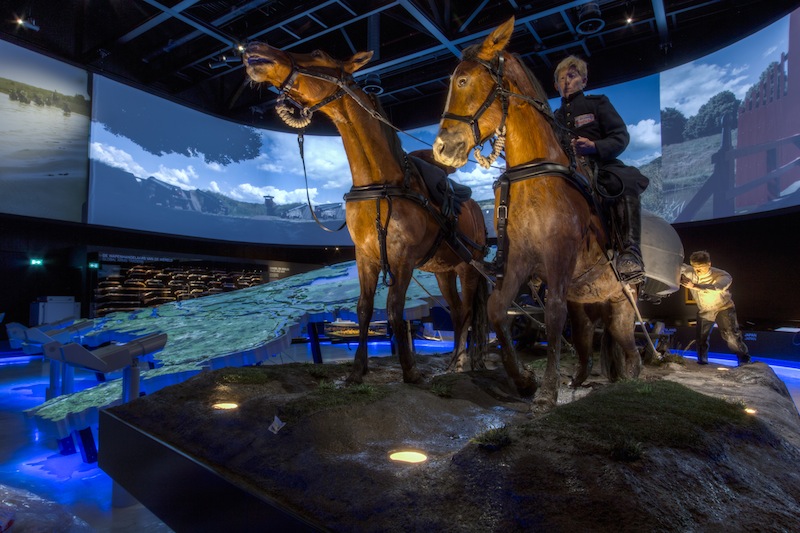 Designed as a fully integrated entity, the new museum uses technology on an unprecedented scale across its expansive 20, 000-metre exhibition area located in the former Soesterberg airbase in the Netherlands. His Majesty, King Willem Alexander opened the museum at a spectacular ceremony with the Royal Military Band, cannon shots and loud shouts of military commands.

Leading the project team was Heijmans, one of the largest construction companies in the Netherlands. The building architect was Felix Claus Dick van Wageningen. Main contractor for the museum interior, Bruns was responsible for process and project management, development, engineering, production and installation of all the exhibitions. The project includes lighting, hardware and software – animations, short movies, games and a mobile application. Bruns subcontracted international lighting design, AV and show control company Rapenburg Plaza to work with exhibition architect Kossmann.dejong on the project.

“Rapenburg Plaza was brought in at the beginning of the project to develop a wholly integrated lighting design, multimedia, audio and show control system that would add great value to the National Military Museum. It needed to be simple to use, maintain and deploy combining all media together over an IT infrastructure. We have worked with RapenburgPlaza before on several award winning international projects so knew their capabilities, ” said Maarten Taborsky, Project Director at Bruns B.V.

“Rapenburg Plaza has an intensive way of looking at hardware and designing systems. Their complexity of integration was vital to telling the museum story. Our unique working partnership and cooperation will continue for ten years after the museum’s official inauguration, ” added Taborsky.

“All 17 museum environments use technology in an iconic, integrated and interactive way. Visitors can interact with technology either by accessing information or bygaming – so there really is something to engage everyone who visits.”

The client wanted the audiovisual system to have a minimum lifespan of 15 years. Rapenburg Plaza brought several design considerations to life including a sophisticated technical lighting bridges installed in the high ceilings for access to equipment for maintenance as well as long distance cable runs and multiple server rooms. The lighting design by Rapenburg Plaza’s in-house Lighting Designer, Pelle Herfst consisted of more than 3, 900 energy efficient LED lighting sources.

The new site includes many places where digital media, lighting and audio play a key role in educating and informing the public.

Greeting visitors is a 7.5-minute presentation about the museum introducing its people as well as a moving and compelling insight into the social aspects of warfare, history and its future.

Hall 1: The Netherlands and the World

This first exhibit comprises 25-metre wide panoramic projection positioned above a 7 x 10-metre giant projected giant map. Cantilevered above the floor, the map is integrated with projected video, surround audio and lighting providing a stunning presentation of the tactical and strategic posts in the Netherlands. Four custom designed telescopes at the foot of the giant map, zoom into the map positions providing information about weapons used and map locations.

Around the perimeter of the exhibit are eight electronic information points looking into war history and how the world has changed within the last few centuries, including 9/11 events.

“By giving visitors the opportunity to use big gestures over the map, they are able to access the story of the Netherlands in a phenomenal way, ” added Maarten Taborsky, Project Director at Bruns.

Hall 2: World of the Armed Forces

A large touchscreen comprising three 55-inch monitors is integrated with an infrared bezel that allows the audience to interactively access information about the categorization of awards and medals.

Integrated audio and lighting are a highlight in this room focusing cabinets and art collections in a boardroom environment.

Hall 3: Soldiers in the Spotlight

Located throughout this exhibit are interactive seated cabins that tell personal stories of veterans and soldiers. Here, Rapenburg Plaza has integrated audio into each of the seated cabins along with exhibit-wide lighting and video. 42-inch monitors and ‘Raapu’ players are located around the edge of exhibits to tell the stories about survival!

One of the only specially designed 360-degree tilted immersive floor to ceiling dome projection systems in Europe, visitors are immersed in a narrated high-resolution film about warfare throughout the centuries. The steel dome measures 14-metres wide.

“The immersive dome system is really unique and we understand that it is the only one of its type in Europe, ” said Maarten Taborsky, Project Director at Bruns. “The technology and its architecture designed by Rapenburg Plaza allowed us to make it a system that met the client budget and is the best of its kind!”

Around the outside of the dome are five missions showing command on the field and tactical games. These include four 55-inch foil touch screens showing information and digital photographs.

“We wanted to provide the highest-quality projections and immerse the audience in storytelling, ” added Jansen.

Hall 6: Society and the Armed Forces

Fourteen old-fashioned TV screens show content from society. A ultra-compact ‘Pico’ projector is built into the rear of each screen. Lighting is designed to use a day and night experience on a giant scale-model garrison. This exhibit highlights how people look at the Army. It uses six television cameras integrated with 17-inch monitors where the audience can listen to a film about the Netherlands, candeactivate a military device and zoom into the Netherlands showing its unique military heritage.

Rapenburg Plaza ensures that light plays a dynamic role in this room in combination with video projections. Taking visitors on a journey into the future, this exhibit comprises 360˚ projection onto various surfaces.

“Rapenburg Plaza installed the world’s first 1.2-metre diagonal multi-touch interactive spheres from Pufferfish Displays. The two spheres are suspended from the ceiling. This exhibit looks into the future of technology, defense and warfare, ” said Maarten Taborsky, Project Director at Bruns.

In the centre of the room is a 4.5 metre diameter projected sphere. The sphere uses four Panasonic projectors integrated with Dataton WATCHOUT multi-image display and presentation software.

Designed as a presentation space, this area uses Europe’s first ever installation of Meyer Sound CAL Line Array audio. The technology was supplied by Audio Electronics Mattijsen (AEM) and integrated with a giant 6 by 3.4-metre high screen using Digital Projection International projectors. The presentation showcases a film about modern weapons and sits amongst weapons, tanks and planes suspended from the ceiling.

Summing up the design and deployment of lighting, multimedia, audio and lighting control at the museum, Sierk Janszen at Rapenburg Plaza concludes: “We wanted to use the latest technologies to bring military history closer to people, to immerse them and encourage them to participate, and to make them aware of their involvement. The results of our work is a fantastic museum which is unique in Europe and a pleasure to visit for the whole family.”

Rapenburg Plaza’s involvement with the project doesn’t end with its opening. They will manage various elements of the facility well into its operation to make sure it runs smoothly.