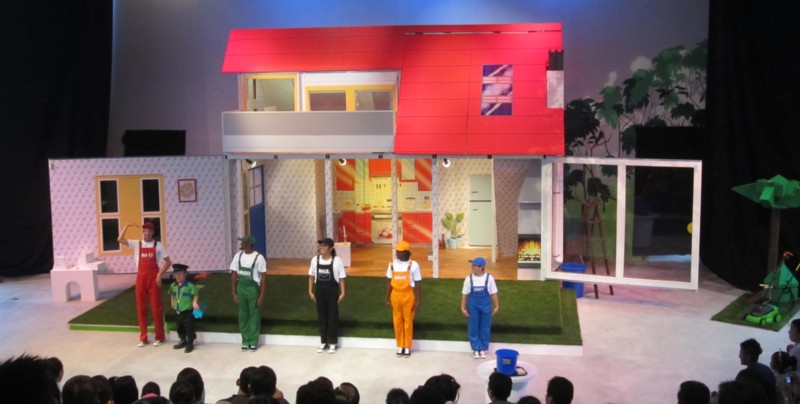 Ash Arbi, Events & Entertainment Manager at LEGOLAND® Malaysia says, “The Loudest Shout is a fun-filled educational stunt show, teaching children about the dangers inherent in a typical household. When we first opened the show to public, the response was overwhelming. The audience were so excited about the show, that they came to watch all 3 shows in a day, often to a full capacity crowd. The main show is preceded by a pre-show which literally makes my heart stop as the stunt performance by Elodie is really breath-taking. I’m simply amazed!

The show itself brims with positive qualities, of which the best is its educational exposure of our typical day-to-day household environment which is familiar to children. Showtime Entertainment Productions have used elements from the LEGO City product line as the source for a five-character show that, to my delight, I find totally captivating. The show also features musical numbers and takes place in a large LEGO-inspired house.”

“The Loudest Shout” is an original live show from Showtime Entertainment Productions combining incredible stunt work, attractive characters, a funny story, a catchy song, a nimble dance and some jaw-dropping magic.  Already described in web blogs as “awesome”, the show has proved to be one of the most popular attractions at LEGOLAND® Malaysia since the park opened in September 2012.

Based in a LEGO house, the performers play recognisable LEGO characters who must strive to become Danger Detectives and spot the hidden dangers in the home. Everyone in the audience has the chance to take part and to enthusiastically “shout out loud” whenever they see danger.  In each show, somebody special gets the chance to come up on stage and help the characters as they search.

Showtime Entertainment Productions have also created a complementary street act that roams the park with a reggae-style fun performance, recruiting guests for the main show.

LEGOLAND® Malaysia’s guests come from diverse cultural backgrounds and the success of season ticket sales means that many guests are repeat visitors.  To cater to this unique audience Showtime Entertainment Productions have brought together an international cast of extraordinarily athletic acrobats and extremely versatile performers who create comedy and some special theatrical surprises, making the show a truly universal product.   In addition, five different versions of the show have been created so that visitors are unlikely to see the same show twice.

“The Loudest Shout” has the hallmark of professionalism that the theme park industry has come to expect from Showtime Entertainment Productions.  With three or four performances a day at the City Stage, playing to audiences of up to 900, the Loudest Shout has broken attendance records so far.

President of Showtime Entertainment Productions, Medhy Menad, said, “We wanted children of all ages – from eight to eighty – to be enthralled and entertained by the magic of the LEGO brand. Our intention was to deliver important messages about keeping safe at home in a very entertaining way.

“We had enormous help from everybody at LEGO in the way we constructed our show, from costume design to set design; and we have created something very fresh and new with an original storyline and script and original music and lyrics. Plus we’ve thrown in some astonishing stunt work and finished it all off with a little magic.

“It’s a really winning combination and it will run here in Malaysia for the next six months. I’ve been very happy to see all the smiling faces, young and old, as people leave the theatre – often reluctantly – after the show.”

S.E.P. is world renowned for producing live entertainment. S.E.P. consists of specialists that have been designing theme park attractions and facilities for over 20 years. Our headquarters and training centre are based out of U.A.E.

Dubai is our base location for all networking, incoming and outgoing information. This enables S.E.P. to always be in contact with clients regardless of our location.

Our company can create and deliver the best live entertainment anywhere, being cost effective, being on budget and being on schedule.

With all the different customs and nationalities within our company and with our clients, S.E.P. has formed a respect and trust with each other not only to make decisions and take action but especially in crisis situations.

This is what we do and love; it’s our expertise to create exciting and powerful live shows across the globe.